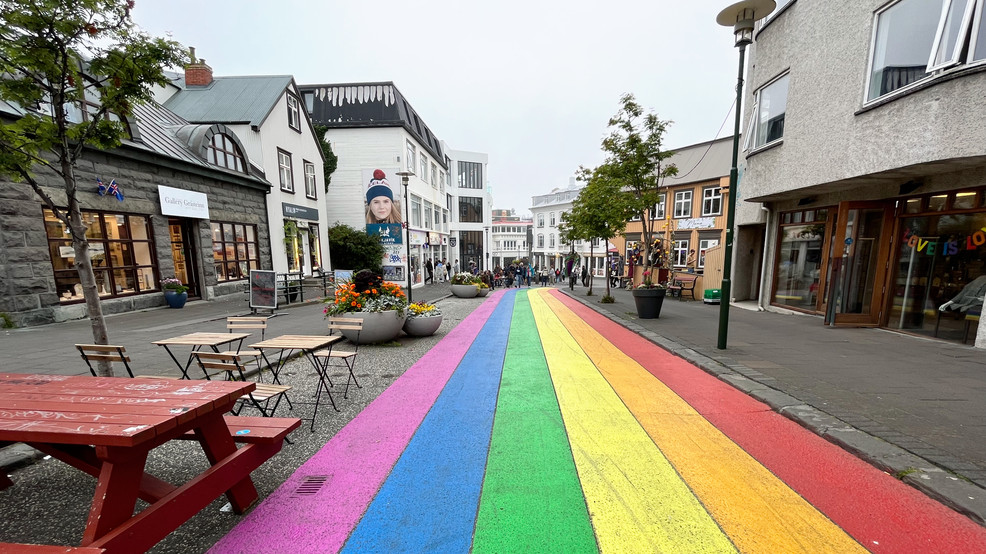 Why Pride in Reykjavík is worth the trip for queer Seattleites

A drag show in a historic opera hall and nary a piece of Fortune 500 swag made in China. Pride in Reykjavík, Iceland is very, very different from the states – even its sister city Seattle. It’s refreshing, wholesome and overwhelmingly affirming. You can feel the queer power here. And it’s a blueprint for what our own Pride could be.

This month, Icelandair invited me to Reykjavík Pride. I have no idea how they found me. But I guess being a queer theme park journalist puts you in a micro niche. At first, I was skeptical. I’d never considered Pride tourism a thing. But I was curious. What does Pride look like in another country? So, they put me on a plane, put me up in a hotel and gave me an itinerary of all the queer offerings in the Icelandic capital. The annual celebration, which happens every August, is loaded with a week of queer programming, from kid pool parties to adult seminars to tons of free concerts, screenings and meetups. Like most Prides, it all culminates with a big parade and family-friendly park festival.

I expected to see Icelandair rainbow branding throughout the trip. But I didn’t. Because they’re not allowed to. There are no booths with companies. No corporate floats. And when I asked a PR rep, "So, why this press trip? Why now?" He simply told me that Icelandair (and Iceland, for that matter) just want people to know that Iceland is LGBTQ+ friendly and safe. It sounds nonchalant, but for many queer travelers from the U.S., that means more than a free tote bag. And in many ways for a queer Seattleite, Reykjavík feels like home.

Of Seattle’s 20 sister cities, Reykjavík is the gayest as far as civil rights and culture. It’s also probably the most similar in climate. No, Washington’s volcanoes aren’t as active but we do share an understanding for the long, dark days of winter and what that can do to the mind. We share UNESCO City of Literature titles, an obsession with coffee and, of course, a reliance on the sea for our survival. There are century-old fishing roots that tie Iceland to Puget Sound. And Seattle has the largest Icelandic community in America. (If you haven’t been to the National Nordic Museum in Ballard, you have to go.)

But their Pride hits different.

I was not prepared for the level of hype here. Even the gas stations have Pride flags. Multiple Pride flags. It’s like our Capitol Hill energy but everywhere. About 100,000 people attend Reykjavík Pride, which sounds small compared to Seattle’s 300,000 people, but 100K is actually about one-third of Iceland’s total population. By contrast, of Washington state’s 7.5 million people, only about 4% attend Pride. It’s not that Icelandic people are super gay. They’re just super supportive of each other. And everyone attends the Pride parade downtown along Rainbow Street.

Remember those festivals in Stars Hollow from Gilmore Girls? That’s the vibe. But Icelandic and queer. The parade and subsequent park festival (which is also free) feel like your hometown coming together for a big Fourth of July barbecue. Little shops and cafes all had signs posted on their doors that they were closed for Pride. I don’t think I’ve ever seen so many straight people or churches that excited to celebrate the LGBTQ+ community. And it was more than just having a good time. It was respectful and in solidarity. It felt like true allyship.

Even drag is held in high regard. The marquee Drag Djók event was in Gamla Bíó, a former opera hall turned swanky, modern theatre. This was a full-scale production with plush, assigned seats. And like so many other professions in Europe, there’s no need to tip the queens because they’re actually paid a respectable wage. That blew my mind. I had a stack of crisp bills in my purse ready to go but as it was explained to me by other audience attendees, "That’s just not done." There’s a deep respect for queer art here. Drag, of course, is counter-culture, but to see it hosted in such a sophisticated and culturally significant venue says a lot about Iceland’s art community. Wouldn’t it be amazing to see Seattle’s top queens at McCaw Hall? Or what if we paid the same ticket price as the Pacific Northwest Ballet’s annual "The Nutcracker" to see local drag?

Something else struck me about these Pride events: It was for everyone. The crowds were more diverse, from a queer harbor cruise to a late-night concert. There were teens and boomers and gay men and queer women mingling under one roof. Perhaps it’s because the LGBTQ+ community is smaller on this island nation, but I’d like to think it’s because Iceland has an understanding that everyone truly is equal. And respected. Historically for this country, it’s been an all-hands-on-deck situation to get through the harsh, unforgiving winters. From the turf house museums to FlyOver Iceland, many attractions will remind you that a strong community is what has saved Iceland. You do get a sense of that among Iceland’s queers. I don’t think I’ve ever been treated more warmly as a queer woman by cis gay men at a Pride, ever. It was refreshing to see so many different people within the community gather together. Because in the states - yes, even Seattle - it gets cliquey.

"It’s Pride for people who hate Pride," said fellow journalist on the trip, Paul Gallant, while we were bopping our heads to some Icelandic '80s pop song with heavy saxophone that we couldn’t understand a word to at the Pride closing party. That’s exactly what I’d been feeling all weekend. Reykjavík Pride is all the programming that I love about Seattle Pride without the stuff – the stickers, the paper fans, the plastic cups, the cheap pens and on and on and on. Because when you strip away all the corporations and the branding and the marketing of Pride, you’re just left with community and the celebration of community. That’s the part that matters. Our sister city gets it.

Reykjavík Pride 2022 is over now. But Iceland is queer year-round. And with current inflation in the U.S., Europe has never been cheaper. Delta, British Airways and other major airlines have flights from Seattle to Reykjavík, but Icelandair has the only direct flight and its economy ticket is significantly cheaper than other European roundtrip fares. (Though, because the flight is only about seven hours, main cabin does not get complimentary meal service; so BYO-dinner and snacks unless you want to pay for a sad, overpriced cart sandwich somewhere over Greenland.)

If you go, stay at The Reykjavík EDITION, the brand-new hotel which is part of the Mariott Bonvoy network if you’re a points hoarder like me. It’s a gorgeous new property with a complimentary spa, the most delicious Icelandic skyr yogurt I’ve ever had and, most importantly (and this is highly uncommon for Iceland), bone-chilling air conditioning for my tacky American sleep preferences. Rainbow Street is rainbow all year and Kiki Queer Bar is a must-visit. But you don’t have to wait until next August. Iceland has a Winter Pride, too, with the Northern Lights as its largest rainbow flag.

Deanne Revel is a travel journalist and freelance writer for Seattle Refined. Follow more adventures here. While the products, services and/or accommodations in this story were provided without charge, the opinions within are those of the author and the Seattle Refined editorial board.