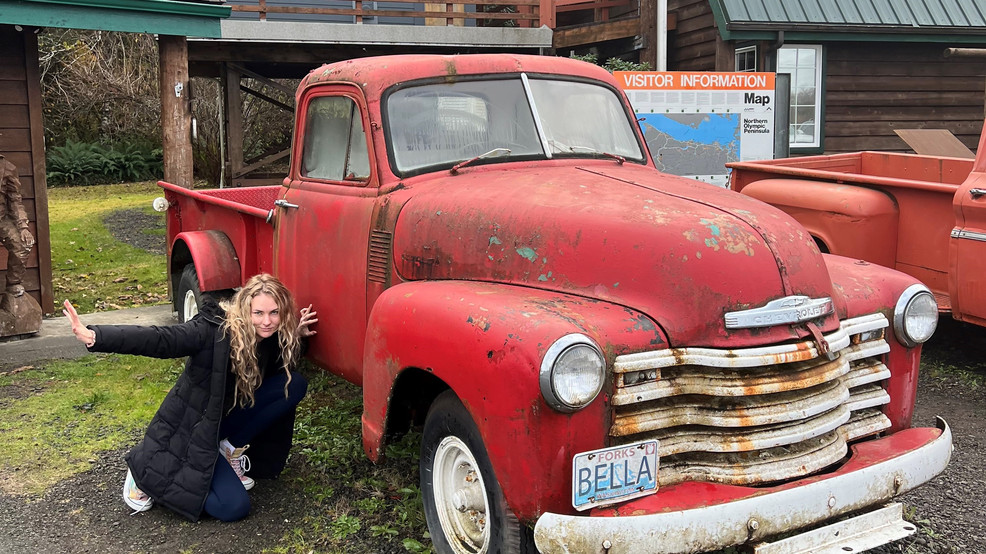 Who would have thought when I cracked open my very first Twilight book in 2008 that it would unleash an obsession that would last over a decade?

As a girl from a small Washington logging town, it felt like this book was written for me.

"In the state of Washington, under a near constant cover of clouds and rain, there is a small town named Forks. Population: 3,120 people." -Bella Swan, Twilight.

In honor of the 14th anniversary of the Twilight movie, Seattle Refined Assistant Editor Abby Luschei and I decided it was time to revisit the town of Forks, Washington. Has the Twilight hysteria died down? Is a trip to Forks even worth it? Let's find out!

As crazy as it sounds, we did this in one day, spending a total of 8 hours in the car from Seattle. Committed and eager to hit the road, we left at the break of dawn (*wink*), sporting "vintage" Twilight t-shirts from Hot Topic and playing music from the movie soundtrack to boost morale.

Descending down the windy forest road, I think it's safe to say we were both flooded with nostalgia. It had been 12+ years since we had been to Forks, after all, and we were now coming back as women in our mid-20s. Turns out, it's not just a phase, Mom!

This rainy Northwest town managed to hold off on the drizzle during our visit, so it must have been fate. After a photoshoot at the town sign, we made a point to park and wander around all the Twilight-themed shops. And yes, there are many. I found myself peeking around corners, silently praying a Cullen would stumble upon me and decide I was worthy of turning.

In all seriousness, it was reassuring to see we weren't alone, and that after all these years, the Twilight craze is still alive and well in this little logging town. One of the shops even handed us a map with all of the must-see Twilight movie props. At first, I wondered how they knew we weren't locals... but then I remembered we were rocking t-shirts with giant pictures of Edward Cullen.

Before our little tour, we stopped at "The In Place," a cozy diner fit with forest vibes where we had top-tier grilled cheese sandwiches. Golden crisp, gooey, and dripping in butter, just as they should be.

After lunch, we set off to see Charlie's cop car, which was admittedly lackluster. We quickly drove by and made our way to the main attraction, Bellas 1960s Chevy truck. It was fun to reflect back on photos of us standing in front of this very truck many years ago, and how much we have grown since then, our love for the series included.

Next up: the Swan residence. This 1905 farmhouse is the very one that inspired Stephanie Meyer when she wrote about it in the books, and you can even rent it out on Airbnb! I took mental note of that for next time. We both got a laugh out of the huge cut-outs of Edward and Jacob on display in the upstairs window.

Finally, La Push, baby! No, but seriously, La Push was my favorite part of the trip, though I could be biased because I am historically *gasp* Team Jacob. We drove deep into the woods and entered the Quileute Reservation, stopping at First Beach. The cliffs and endless ocean here are otherworldly. We walked on the beach, climbed atop the rocks, and stood in awe of this enchanting little corner of the PNW. Here, I felt deeply thankful for the Twilight series because, without it, I may not have ever known about this magical place or been inspired by the legends of the Indigenous people here.

Before making our way back home, like the true nerds we are, we ran into the rainforest and had a blast recreating scenes from the movies.

Though we didn't spot any vampires (that we know of!), this trip was 100% worth it and I would recommend it to any Twilight fan.

If (OK, when) I do this trip again, here's what I would do differently. The long car ride is lowkey brutal and one day just isn't enough, you'll definitely want to stay overnight. Take the plunge, rent the cabin, get the full experience. The Olympic Peninsula is one of the most beautiful places in the country and I wish I could have spent hours hiking through the Hoh Rainforest and getting to experience the waterfalls, lakes, and hot springs in the area.

It was such a privilege to relive my favorite fantasy series in Forks. Driving down the same roads as Bella, I connected to Twilight in a brand-new way. And it was extra surreal being there on the 14th anniversary of the first Twilight movie.

This was a trip for the books!