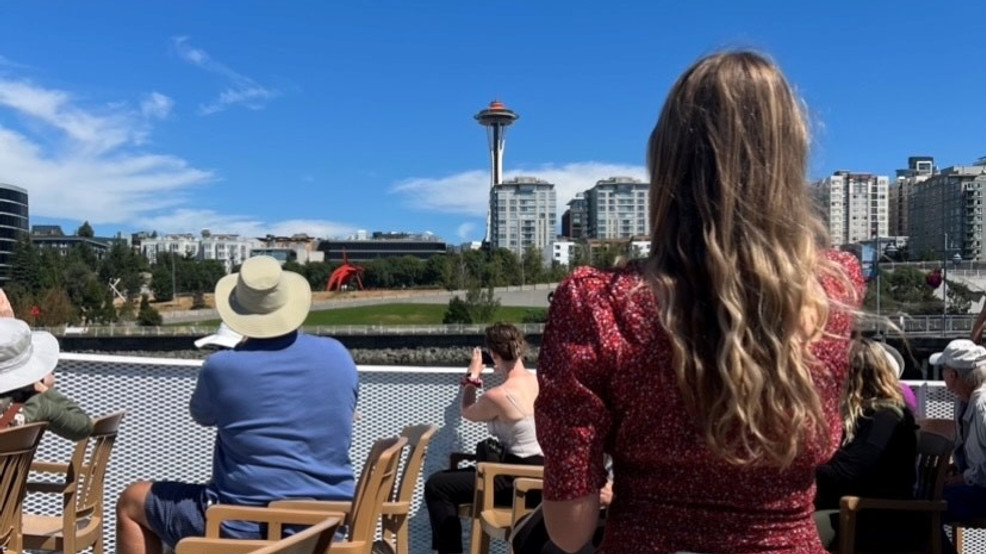 A Seattle native's first time on an Argosy cruise

The Sound, sea lions, and salmon, oh my!

Join me on my first-ever boat tour with Argosy. As a Seattle native, this experience has always evoked an eye roll or two. Isn't this a gimmick for tourists? But boy, was I wrong. On assignment as a brand new intern for Seattle Refined, I embarked on a journey that I would soon be talking about non-stop for weeks to come. You may think you can get your PNW boat fill by traveling via water taxi or ferry, but you'd be missing out. I was under the impression I had seen all there was to see of my city until I got to see it from a different point of view.

I boarded the Argosy Locks Cruise with Seattle Refined Assistant Editor Abby Luschei from Pier 54 on the Seattle Waterfront at 12:45 p.m. on a gorgeous 80-degree August day, sporting a short-sleeved blouse and denim jeans that I would soon regret. I scored a seat right in the front, which I highly suggest because it had the best view for seeing the sights. Our tour guide, Samantha, warmly welcomed us on board and dove straight into narrating our journey, sharing fun historical facts about what we were seeing.

After claiming my spot, I made a beeline to the bar to get myself a cocktail. Gotta support a local company like Copperworks Distillery, right? But let's be honest, I just love a good gin and tonic. I was on a cruise, after all.

Drink in hand and salt in the air, I was giddy as we toured around Elliott Bay. Not a bad day at the office, eh? I practically bolted to the other side of the boat when the captain announced we were approaching sea lions basking on a buoy. I had seen harbor seals 100 times, but sea LIONS? Never. The boat slowed so we could all get a glimpse, and Samantha began filling us in on sea lion facts.

She's been an Argosy tour guide for eight years and shared her favorite thing to spot on tours is orcas, of course! Samantha is crossing her fingers to see another one this summer.

Lucky for us, the Mountain was out! Turns out, Mount Rainier is only visible on average 90 days out of the whole year. Who knew? Maybe that's why it means so much to us locals. It was such a clear day, we were even able to see the snowy peak of Mount Baker in the distance.

Continuing onward, we passed Discovery Park and its infamous lighthouse (which I learned is one of the oldest in the Northwest. Thanks, Samantha!). Then we journeyed into the Shilshole Bay Ship Canal, which was a bustling city in and of itself, complete with insane views of Magnolia (fun fact: Magnolia was built on glacial drift). We got up close and personal with colossal cargo ships and cruise liners, but the highlight for me came as we entered the Ballard Locks.

Being inside the Locks was truly a one-of-a-kind experience I will never forget. How the captain managed to get our boat into this tight chamber honestly baffled me. Once inside, the doors behind us closed and I started to feel the boat sinking lower into the saltwater as it began draining, and then rise up again as the chamber filled with fresh water from Salmon Bay. That's when I discovered how appropriate this name was after massive Chinook salmon began thrusting their bodies up above the water and flopping back down. I felt like I was experiencing something straight out of a National Geographic magazine.

Once we made our way through the Locks, we entered Lake Union through the Fremont Cut, passing Gas Works Park, tug boats and neighborhoods of houseboats... including, of course, the iconic one from "Sleepless in Seattle."

As we neared the end of our two-hour journey, I watched with wide eyes as float planes took off directly from the water just a short distance from our boat, before we docked in South Lake Union.

You never know what you'll see on an Argosy cruise, which adds to the fun and a great excuse to ride again.

Here are my first-timer's tips: If I could go back in time and do this over, I would definitely have lunch on the waterfront beforehand because the only food options available on board are light snacks like popcorn. Wear layers because the temperature varies so much it's really hard to gauge what to wear. And I'd bring my nice camera because photo opportunities like this just don’t come around that often.

Whether you're a history buff, a nature lover, or just love a good boat ride, this is truly an 11/10 Pacific Northwest experience.

Maddison Newell is a Journalism student at the University of Washington and an intern for Seattle Refined. While the products, services and/or accommodations in this story were provided without charge, the opinions within are those of the author and the Seattle Refined editorial board.