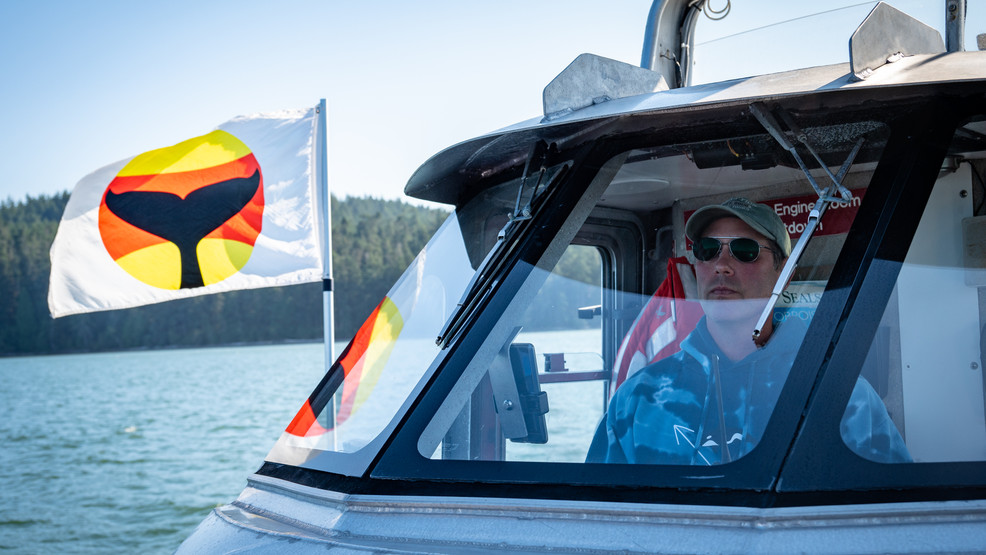 One man is living his literal dream at Deception Pass Tours

You have probably heard (and said, with a tinge of sarcasm) the phrase, “Living the dream!”

Yet, there is one man who really is living his actual dream, and it's aboard the Island Whaler and Deception Pass Tours. The man? No other than Captain Brett Ginther, better known as Captain Brett.

It all started back in 2004, when Brett kept having a recurring dream. His nightly vision was of a very unique and unusual boat, and he had no idea what this dream meant. This went on for months until at his wife Terica’s urging, he sketched it all out on a scrap piece of paper.

Then he forgot all about it and went on with work and daily life. About a year later, Brett fulfilled a bucket item and obtained his captain’s license. It is here where Brett’s dream and reality began to intersect.

On an afternoon drive to locate a Nextel phone store, the Ginthers found themselves driving through Anacortes, right by the shipyards of Island Adventures. What do they see? THE BOAT, from Brett’s dream, sitting in the parking lot! Island Adventures became Brett’s first job as an official Captain running whale watching tours but his dream did not stop there.

When the season ended, Island Adventures decided to put the very boat of Brett’s dream up for sale. Perhaps needless to say, that day began Deception Pass Tours.

Our evening tour began in Coronet Bay inside Deception Pass State Park. Everyone loaded into the open air, catamaran-style boat. Even during the summer’s hot weather, it is highly encouraged to dress warmly and with waterproof layers. In fact, many people bring blankets or sleeping bags to drape over their laps. Being an open jet boat means you will have a great 360-degree view but it also means you will most likely get wet!

Coronet Bay lies on the south side of Deception Pass. As we made our way out towards the whirlpools of Deception Pass we were treated to a fairly unusual sight, a pod of Biggs Orcas swimming with the current and on the hunt inside the inlets and coves of this waterway.

Right away, Captain Brett and his crew put up the “Whale” flag as a visual aide to other boats in the area to keep the required distance of 200 yards from the whales inhabiting these inland waters.

Onward, we took in stunning views surrounding us as we passed under the bridge and headed for the Rosario Straight, all at a high speed of 40-45 mph. The 1.5-2 hour boat ride consisted of observing harbor porpoises, sea lions, seals, Cormorants, and Great Blue Herons which are just two of the over 300 bird species calling the Salish Sea their home.

Captain Brett and his crew certainly know a story or two about the Deception Pass area and for Captain Brett, this is all part of living his dream. He has been driving the Island Whaler for 15 years and couldn’t be happier than behind the wheel.

“This is a pretty sweet gig. I hang out all day floating in a magical waterway, waiting for seals to pop up and birds to dive for fresh fish in front of us. I get to spy on moms and dads whispering to their kids from my perch in the wheelhouse, sharing in their curiosity and awe”.

For him, his favorite part of his job is getting to know all the people who come aboard his boat.

“They have been coming out for 15 years, we are now part of their family history and that is a pretty meaningful way to live your life”, explains Captain Brett.

Over the last decade and a half cruising these waters, the Ginthers have faced unforeseen circumstances and this past year was no different. The pandemic hit tourism hard and Deception Pass Tours found themselves shut down for three out of the six months of their season. Captain Brett remembers, “at one point we thought we would have to pawn my wife’s wedding ring to pay an inspection fee from the Coast Guard”, but lucky for them a government PPP loan came through allowing them to cover their basic expenses and carry on.

Now, fully vaccinated, they are sailing at full capacity once again and the dream lives on. There remains only one thing Captain Brett does not care to do in his daily chores. Clean the toilets!!

As for the future? Well, Captain Brett sees himself manning the boat from his wheelhouse.

“I don’t see myself ever wanting to retire,” he says. “Where else can you crab and shrimp and fish at work? If I were to retire, I would want to be doing all the same things I do at work every day - except the toilets.”

Truly one man living out his dream and bringing us along for the ride!

Go to Deception Pass Tours to book your tour. Don’t forget your waterproof slicker and to dress warmly. And be sure to grab your binoculars and camera for an up close and personal view of this wondrous marine life!

Disclaimer: While some products, services and/or accommodations in this post were provided without charge, all of the opinions within are those of the author and the Seattle Refined editorial board.