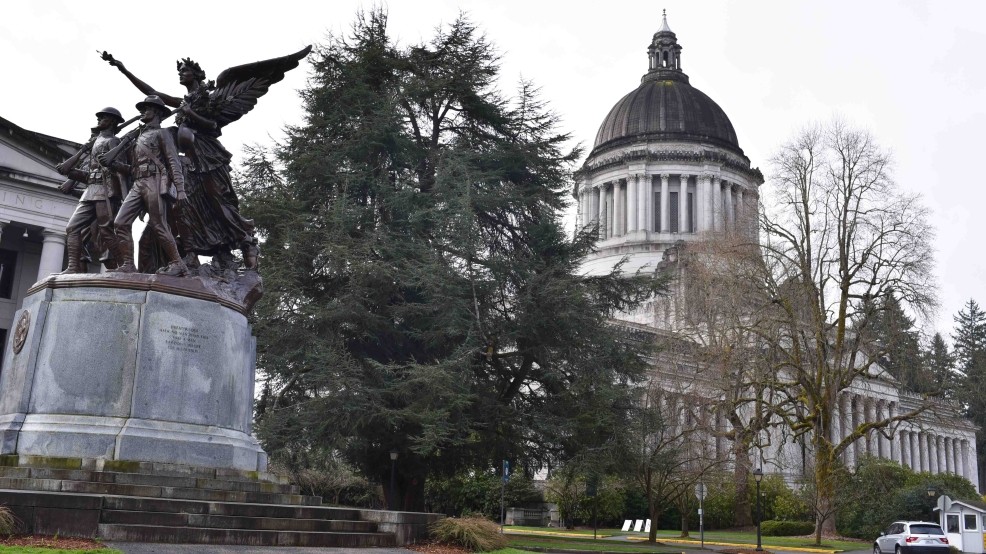 A visit to Olympia isn’t complete without a stop at the Washington State Legislative Building. Free, guided public tours are offered seven days a week between 10 a.m. and 3 p.m. on weekdays and between 11 a.m. and 3 p.m. on the weekend. (Image: Rebecca Mongrain/Seattle Refined)
SEE MORE

Olympia is the weekend getaway you're missing out on

Just 60 minutes to the south of Seattle is a fun, funky town known better for its’ legislation work than its’ weekend getaway opportunities. Olympia is a destination not to be missed though. My family has zoomed past it many times on our way to Portland, with me consistently making the same two comments to my beleaguered family - “Hey! Did you know Olympia is an All-American City” and “Look! It’s Sleater-Kinney Road! There is a band named after that road.” And yet, Olympia is so much more than those two facts.

Home to Evergreen State College, Olympia has a small-town college vibe with a strong community. Creative murals cover the downtown building walls with one of the biggest celebrating and mourning Rachel Corrie with artist’s contributions from around the world.

The restaurants in Olympia feature some of the tastiest meals with cuisines from many different cultures. One of our favorites is Lemon Grass Thai which features freshly prepared food with inspiration from Thai, Chinese and Vietnamese traditional dishes. On our most recent trip, we stopped at the 5th Avenue Sandwich Shop. The wholesome sandwiches with house-made bread were delicious but the biggest surprise was the Beef Stroganoff soup. My husband ordered it because he didn’t like the other soup offering. I snuck a taste and then quickly ordered my own cup of soup. While we passed on dessert, the pie offerings looked mouth-watering good.

For an afternoon pick-me-up, stop by the Olympia Coffee Roasting Co. for a really good cup of coffee. Roasted in house, this shop knows their coffee and is the recipient of many awards. The downtown location is clear and airy with a true hipster vibe. My latte was almost perfectly balanced and my husband was impressed when his cappuccino came with a cup of sparkling water, intended to cleanse his palate before sipping his drink thus allowing the full flavor of the espresso to come through.

Beer lovers will appreciate the fine brews at Fish Tale Pub. Their meal offerings are tasty too, with my husband raving about his fish & chips and our kids gobbling down their meals.

A visit to Olympia isn’t complete without a stop at the Washington State Legislative Building. Free, guided public tours are offered seven days a week between 10 a.m. and 3 p.m. on weekdays and between 11 a.m. and 3 p.m. on the weekend. You’ll learn about the legislative process and about the 173 million pounds of stone, brick, concrete and steel that makes up the building. As the 5th tallest masonry dome in the world, the Washington State Legislative Building is an intriguing for everyone.

For the little ones in your group, a visit to the Hands On Children’s Museum is a must! The 28,000 square feet of indoor space featuring 8 themed areas in science, technology, art, engineering and math takes them through an exploration of more than 150 hands-on exhibits. The museum features an Outdoor Discovery Center with over a half-acre of fun. The exhibits change out seasonally and have featured tricycle rides, kayaking safety, beach exploration and a builder’s area. The museum also has a flock of chickens with extremely knowledgeable staff. The chickens may have been my favorite feature and I peppered the staff member with lots of questions.

Olympia is also home to the Olympia Farmers Market. In their 42nd year of operation, the market is an Olympia mainstay with many residents stocking up on their weekly shop. The stalls are wide and feature fruits, vegetables, meats, baked goods along with crafts, plants, seeds, wood work and much more. The market is a resource for people who like to grow things with the local purveyors offering up their knowledge. Open year-round, the market is currently open from Thursday to Sunday until October before reducing their operating hours in the winter months. My family was entranced with the local entertainment which got my kids up and dancing before too long.

After visiting the market, take a stroll to Percival Landing which runs along the waterfront. One of three waterfront parks in Olympia, Percival Landing features an almost 1 mile boardwalk from the Fourth Avenue Bridge to Thurston Avenue with viewing pavilions.

Other fun activities include the WET Science Center, Olympic Flight Museum and the Olympic Family Theater.