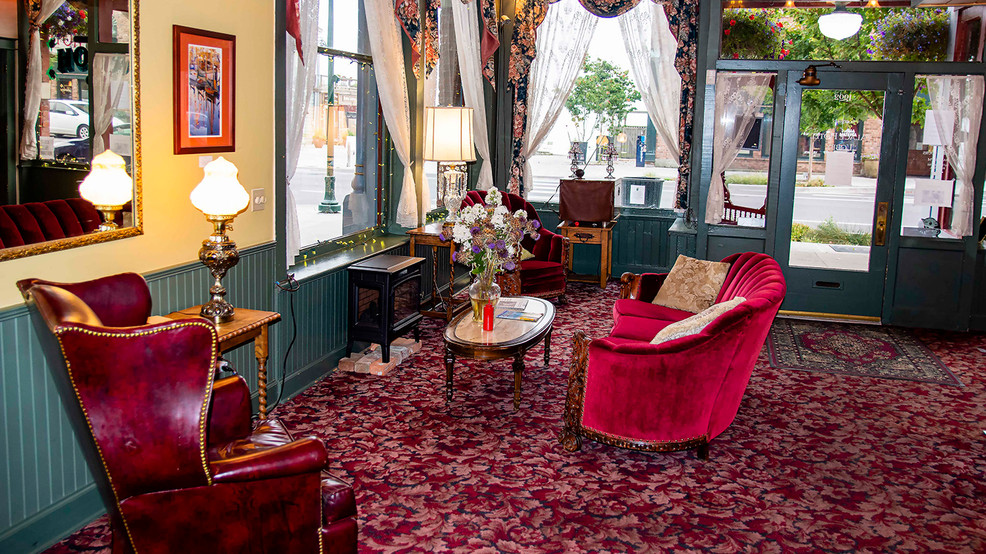 A haunting history at the Palace Hotel in Port Townsend

In the heart of historic Port Townsend, where Victorian buildings stand stately along Water Street, there is one such building with its own colorful past: Palace Hotel.

Built in 1889 by retired sea captain Henry L. Tibbals, this landmark housed many businesses throughout its years, from a billiard parlor and saloon to a town newspaper. The more well-renowned proprietorship to call this building home lived here from 1925-1933. It, too, was named the Palace Hotel, better nicknamed the Palace of Sweets, as it operated as both a hotel and a brothel.

Today, the current incarnation of the Palace Hotel pays homage to those good ol' days. "A step back in time" is the slogan displayed in the lobby — a room furnished in the turn of the 20th-century style. In fact, everything inside the Palace Hotel has been renovated in the old Victorian motif. Even the 16 rooms, named for the girls who once worked there, reflect the essence of their time and their world.

Rumor has it, some of the girls never completely left after the brothel was shut down in the mid-1930s.

This time of year, there is a small pilgrimage to these historical buildings of Port Townsend, for lore of a different kind. The tales sought after are of the spirit world, and yes, everything which goes bump in the night.

The Lady in Blue

The Palace Hotel hosts a few permanent guests, so the story goes, who come out at night, sometimes to mingle with the living. Do not be alarmed if you feel a cool breeze or sudden flick of your hair, for these are benevolent encounters.

The most famous story is of the Lady in Blue, who is honored in a portrait at the top of the stairs. Her name is Claire, and she occupied room #4 when it was a brothel. Guests who have stayed here say she still does. She is just one of possibly 10 spirits who still reside in this hotel.

Eager to learn more history and slightly intrigued to encounter a ghost, my partner and I booked a night at the Palace Hotel. I spoke with a staff member, Michael, who acknowledged while many are attracted to the hotel because of its legends, they, at the hotel, neither negate it nor lean into it. Upon arrival, I was handed a scrapbook they keep filled with haunted stories from previous guests titled The Ghost Book. Reading through the many accounts over the decades, the story of Miss Claire no longer felt like an apparition but began to take a more earthly shape.

She worked as one of the girls in the brothel, now destined to an afterlife roaming the halls of the hotel in search of her one true love who left her, never to return. It is reported her mournful sounds can be heard throughout room #4, accompanied by the sweet smell of her perfume. On one occasion, a guest reported going to dinner only to return several hours later to find Miss Claire gone from her portrait! The frame and painting still hung on the wall, but Miss Claire appeared to be freely walking the building, searching for her lost love. The guest noted the aromatic perfume.

After receiving our key to room #7, we proceeded up the stairs to the second floor, stopping on the landing for a moment to study the portrait of Miss Claire before reaching our destination: the room of Miss Alice.

Unlocking the heavy deadbolt, we walked into a grand room with 14-foot ceilings and a large, kingsize bed. Miss Alice’s room comes with a separate washroom equipped with a large basin sink and clawfoot bathtub. It certainly felt as if we stepped back in time.

A luxurious room. So far, no ghosts.

On our way out to dinner, I paused again at the top of the staircase, taking stock of the Lady in Blue. If she planned to leave her painting this night, like the portraits in a Harry Potter film, I wanted to see it. Alas, upon our return, she still stood unmoved. However, one new edition to the lobby was an old television, broadcasting black and white movies for patrons to view. The film playing was Ghosts on the Loose from 1943, featuring Bela Lugosi no less. Maybe the hotel leans into ghost stories after all.

With all these tales running through my head, a sound sleep escaped me. Every little noise woke me. Are those footsteps in the hallway? Did the door handle just rattle? Perhaps I read too many stories from the Ghost Book before bed. Eventually, slumber came. In the morning, with light coming through the window, the room seemed as it should. I felt a momentary disappointment I had not been touched by a ghost or visited by one.

Then, as we gathered our bags, something caught my eye from the window. Two ghostly white handprints streaked the pane — the outside pane.

"We are three floors up," I said to my partner. There is no way someone could get up here. He and I looked at each other, perhaps a visitor from the spirit world dropped in after all, or did they?

The Palace Hotel is located at 1004 Water Street in Port Townsend. You can find more info or book a visit online.

The Port Townsend Main Street Program is hosting "Haunted Histories & Mysteries" on Oct. 28 and 29. Click here for details and watch more in the video above.

While some of the products, services, and/or accommodations in this post were provided without charge, all of the opinions within are those of the author and the Seattle Refined editorial board.