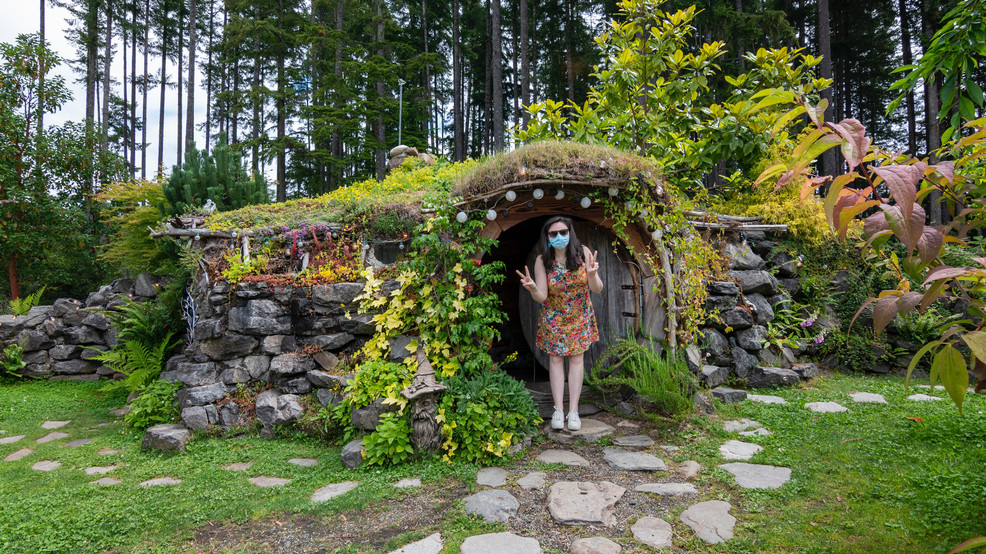 Washington and Oregon are teeming with iconic film locations, pop culture references, counter-culture references and real-life destinations that inspire fantasy. And Seattle is the perfect basecamp for exploring them all. Here are the best nerdy day trips from Seattle, from a mini Marvel universe to the actual Halloweentown.

So many iconic stories rely on the symbolism of doors to convey change, adventure or mystique. And those doors become just as iconic as the stories themselves, from a blue police call box panel to the diagonal door of a small cupboard under the stairs. One homeowner in Vashon Island is celebrating these distinct portals with a DIY fence made up entirely of pop culture doors. There are more than a dozen doors on display, from Kermit’s dressing room door a la The Muppet Show to the tilted, eerie door from The Twilight Zone. It’s a fun photo opp and a fun trivia game guessing which doors are from which series.

You can’t talk about fantasy and fandom in the Evergreen State without mentioning Funko. The company both celebrates pop culture and is a part of pop culture with its signature Pop! figurines of characters from popular film, TV and comic book franchises. And it all started in Everett. Funko and its sister brand Loungefly are sold all around the world, but you can still visit the official Funko headquarters and flagship store on Wetmore Avenue.

The 18,000 square foot shop is separated into themed boutiques with larger than life Pop! figures such as Sailor Moon and Batman. There’s even a Funko-style vignette of the Star Wars planet Hoth, complete with a giant Pop! wampa and Luke Skywalker hanging upside down. And Harry Potter fans will love the Hogwarts school gates and sinister slice of Knockturn Alley, all done in Funko’s playful aesthetic. But the real vinyl pièce de résistance is the mini New York City block a la the Marvel Cinematic Universe. There are several Avengers to pose with, but don’t miss the newsstand tucked in the corner. There’s a Funko Stan Lee behind the counter with Spider-Man comics for sale.

Calling all 90s kids: Remember the Disney Channel Original Movie Halloweentown? It’s real. And it's in the PNW. No magic bus required either. Just head to St. Helens, Oregon. The town square was used prominently to set the scene for the non-mortal realm, and even though city hall looks a lot less magical without Kalabar floating over the roof, the facade hasn’t changed. As for the giant jack-o-lantern, you can see that on weekends in October during the St. Helens Spirit of Halloweentown festival. There are so many movie gems to pose with, from Benny’s cab to the vampire dentist office sign.

Before there was Twilight, there was Twin Peaks. In many ways, the show sparked a curiosity about Washington state and put the PNW on the map for filmmakers and tourists alike. These days, the Evergreen State is usually faked on studio lots. But so much of Twin Peaks was actually filmed on location in and around Snoqualmie, from the infamous Packard Sawmill to The Great Northern Hotel (AKA Salish Lodge & Spa). And, yes, you can visit The Double R Diner (Twede's Cafe in North Bend) for a slice of cherry pie and a damn fine cup of coffee.

For Lord of the Rings fans, a visit to Hobbiton in New Zealand is the ultimate bucket list trip. But if a 14-hour flight to the former movie set of Middle Earth isn’t in the budget, you can get a taste of Hobbit life at The Brothers Greenhouses in Port Orchard. This garden and nursery are packed with beautiful plants and an impressive fairy garden gift shop. But the real draw and the reason to drive all the way over to the peninsula is the hobbit house. Designed by owner Cheryl Pelkey, the house is nestled in the back corner of the gardens, surrounded by stacked stone and creeping vines. And it’s not just a facade. This to-scale dwelling has a fireplace inside--presumably to cook the traditional seven Hobbit meals a day. But the best part? Sean Astin visited the gardens in 2018, and according to Pelkey, he approved of her Tolkien-inspired house. Yep, it’s been co-signed by Samwise Gamgee.

There are two ways to approach Twilight tourism: books or movies. Because while many locations mentioned in the supernatural series are very real—La Push, Forks, Edward’s backyard—they weren’t filmed in the Olympic Peninsula. You can, however, visit. And you should because the Forks Chamber of Commerce has a Bella-inspired pick-up truck, among other photo-worthy spots. As for Twilight film locations in real life, most scenes were shot in Oregon or British Columbia save Kalama High School in Kalama, Washington, where the school’s parking lot was used to shoot the iconic scene where Edward mysteriously stops the van on ice.

Gravity Falls is not what you think of when you picture a Disney cartoon. The animated mystery-comedy series is packed with subversive humor, Easter eggs and actual cryptograms to solve in each episode. But the weirdest, coolest part of the show is the fictional town of Gravity Falls, Oregon, a supernatural hotspot full of mystical creatures and strange paranormal happenings. And while Gravity Falls doesn’t exist in real life, it’s said that the show’s creator Alex Hirsch was inspired by the real town of Boring, Oregon. And while Boring doesn’t have Grunkle Stan’s Mystery Shack, it does have the North American Bigfoot Center, which displays a “wide array of Bigfoot evidence” as well as a life-sized Sasquatch replica.

Portland will always be synonymous with the show Portlandia, but it was the real backdrop for another weird and wacky set-in-Portland show that filmed at the same time: Grimm. The cop drama with a Grimms’ Fairy Tales twist featured numerous Portland buildings and businesses, including The Lion and The Rose Inn (AKA The Bramble Haus) and Reed College. For diehard fans, South Waterfront Blog has an interactive map with Portland area filming locations organized by episode and season.

Technically, Tinkertopia is an arts and crafts store. But it is no Michael's. The Tacoma shop is a trip down memory lane, but it’s also a creative lesson in sustainability and waste. Instead of traditional art supplies, Tinkertopia sells junk—cool junk—from vintage Sesame Street prints to a bulk jar of Hello Kitty rings to clear telephones a la Clarissa Explains It All. The mission is to encourage people to think outside the box when crafting and to try to upcycle materials (such as pristine Ducktales Happy Meal boxes or plastic Gargoyles figurines) destined for the landfill. Tinkertopia even has a crayon upcycling program where used Crayola nubs are melted down and turned into custom crayons such as a Doctor Who Tardis or Dalek. Yes, Dalek crayons.