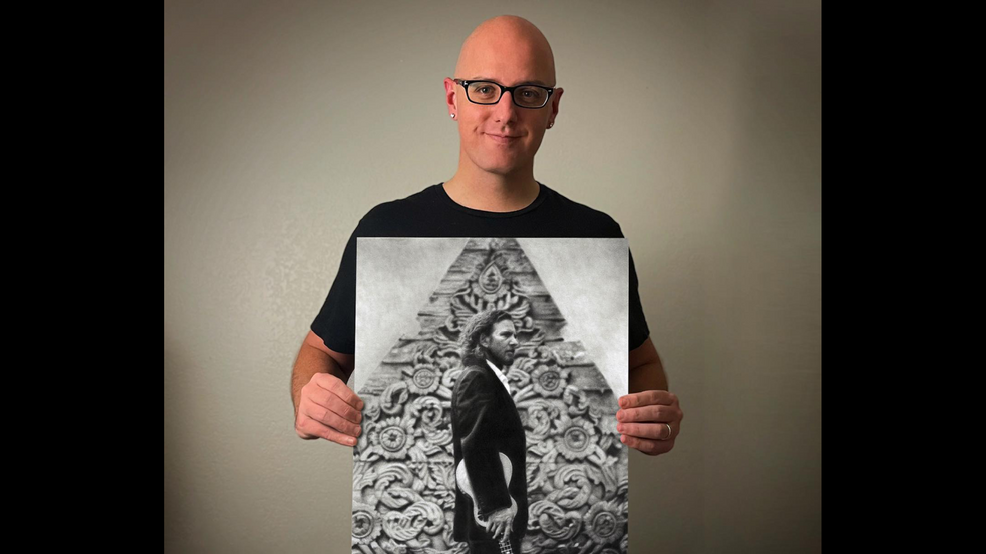 Artist Keegan Hall with the drawing he created in collaboration with Eddie Vedder has raised $100,000 for charity. (Image: Keegan Hall)
SEE MORE

It was just last summer that Refined got to meet acclaimed and ultra talented artist Keegan Hall. Hall shared his incredible journey to becoming a full time artist with us - and how he was using his gift (and hard work) to help others. We recently reconnected to learn about his most recent project, a collaboration with Pearl Jam's Eddie Vedder, with proceeds going to EB Research - it's a charity that's very important to Vedder and his wife Jill.

Seattle Refined: Keegan Hall you’re a local artist known for creating hyper realistic drawings of athletes and entertainers. We’re talking Kobe Bryant, Pete Carroll and Russell Wilson, Chris Cornell, to Jewell Lloyd and Sue Bird - that’s just the start! When we were with you last summer we heard a lot about your work and the Keegan 200. What is the Keegan 200?
Keegan Hall: It’s kind of my version of a charity campaign. I pitched Richard Sherman on it - two hundred prints for $200 each. And he said yes - we sold out on the first day. It’s kind of been rocking and rolling ever since.

You’re extremely modest when you say 'rocking and rolling'. This [last] summer when we counted it, [the amount] was over $425,000 [updated to $541,593 at the time of this posting] that you had raised for charity - so that’s pretty incredible!
I’m sure proud of that and it’s crazy to see where it’s gone from where I came from - my small little town and to see it’s big impact through my art it’s really unbelievable.

At that point you had captured the images of some incredibly famous folks. But there was someone left on the wish list and it came up in our interview...
How can I forget! That was amazing to kind of put that out into the world, and kind of see what came of it.

You said "I would love to work with Pearl Jam" - and I jokingly said "Eddie Vedder, if you're watching - give him a call!" What happened after that aired?
I took that clip, I put it on social media shared it on Instagram and actually tagged Pearl Jam and [Eddie Vedder's] wife Jill. And pretty much right away Jill got back to me and said ‘Wow this is awesome.’ You know she saw the little story that you did about kind of my journey back into art and was like ‘I’ll ask Ed’ it was - just like that! You get to see how down to earth they are - super, super nice people.

You got the green light. You’re sitting on a couch with Eddie Vedder letting everybody know about the project you’re working on.
It was pretty cool just have that authentic video in which we were just being ourselves hanging out and going for it.

I know that Eddie (and you call him Ed which I love) and his wife Jill are really amazing philanthropists and they do a lot for a lot of people. Can you tell me about EB Research?
So EB Research it’s Epidermolysis Bullosa. It’s a genetic disorder that affects the skin. Jill - one of her childhood friends - their kid actually had this. You can see how devastating it is, and they founded EB Research. It’s actually amazing how much progress that they’ve made towards curing this.

You raised so much money in such a short amount of time.
That’s gonna be a tough record to break. We got over $100,000 in about an hour! I’m a Pearl Jam fan and I know we’re all die hards but even that was like WHOA! That was wild. Hopefully we’ll be able to do something like this maybe next year and raise a ton more money because yeah - the fans definitely came out to support. So hopefully we can do it again.

How did you come up with the ‘right image’ to do?
They wanted to do something one that wasn’t so well-known. If you’re familiar with Danny Clinch - one of the best photographers ever. Danny kind of let us go through his vault of amazing images and we found one.

How quickly did the signed prints sell out?
All we did was put out an email. It sold out within the hour, my website crashed it was just just chaos everyone was clamoring to get these.

Alright now you’ve done a beautiful portrait of Eddie Vedder who is next on your wish list?
What I think would be really cool is to work with someone like Chris Pratt, another local Seattle guy and he had a big campaign for the Special Olympics. Special Olympics has a special place in my heart because I have a disabled sister. Give back to Special Olympics, team up with Chris and see if we can beat that Eddie Vedder record in one hour.

OK Keegan I’m gonna do this - Chris Pratt if you’re watching give him a call! We’ll see if it works again...
I’m rooting for you and Special Olympics is rooting for you. So c’mon Chris [Pratt] don’t let us down man!

Hey Keegan, congrats - it’s aways such a joy talking to you. Thank you so much.
Likewise. Thanks for your support you’re a big part of this too, so thank you too.