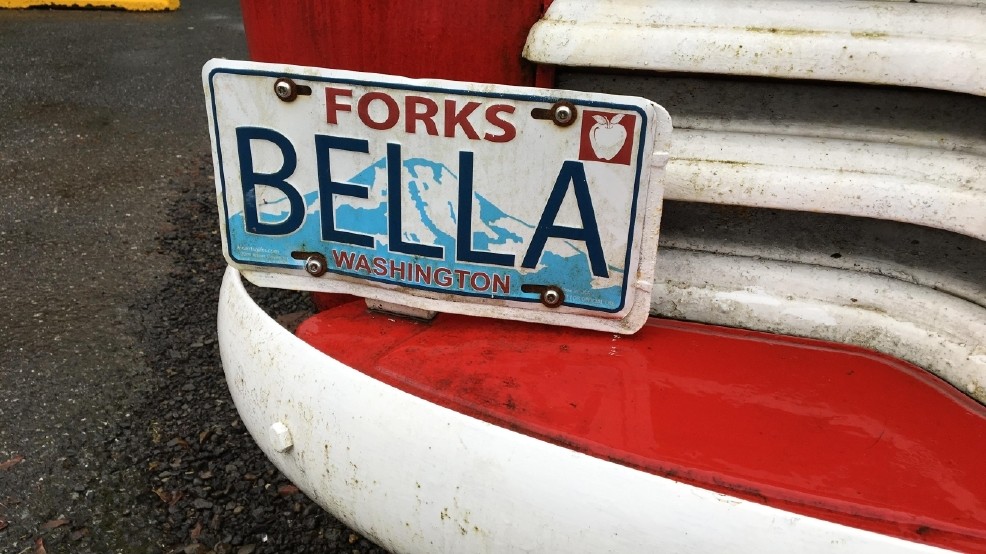 Pre-Twilight, you didn't see many people visiting Forks other than fishermen and hunters. But once the books and movies took off, the town was suddenly overwhelmed by tourists. (Image: Kelly Blake / Seattle Refined)
SEE MORE

A Tiny Northwest Town will FOREVER stay in the Twilight Spotlight

The Twilight Saga was a monster blockbuster, grossing more than $3.3 billion worldwide. Twilight tells the story of Bella Swan, a moody teen from Forks, Washington, who falls in love with a vampire named Edward Cullen. The hype actually started back in 2005 when Stephenie Meyer released the first of the four Twilight novels. The vampire fantasy became a global sensation and landed the tiny town of Forks in a spotlight it's still basking in. (Check out the video above!)

Pre-Twilight, you didn't see many people visiting Forks other than fishermen and hunters. But once the books and movies took off, the town was suddenly overwhelmed by tourists.

"When the books came out we had issues with people who wanted to buy Twilight souvenirs and we were like we don't have Twilight souvenirs and so we created businesses," said Don Grafstrom, President, Forks Chamber of Commerce. "And I think there was a business that started shortly after and sold a million dollars' worth of Twilight-related items in the first year."

In fact, since Twilight's debut in 2005, more than half-million fans have made the journey to the former logging town.

According to Grafstrom, former Governor Christine Gregoire said Twilight saved tourism in the state of Washington.

With so many people headed to the peninsula to experience everything Twilight, the town moved quickly to create the ultimate fan experience.

Susan Brager and her husband own Forks Miller Tree Inn, known to visitors as the "Cullen House," where Edward Cullen and his vampire family live in Twilight.

"We decided to put the Cullen name on our mailbox out front and then we put a sign on our front door that Esme supposedly wrote to tell people where the family was," said Susan Brager, owner of Miller Tree Inn. "We do have placards with all the characters' names on them in each room. And we tell our guests they get to decide whose room they think they're in and then they can hang that placard on the door. So in the morning, it's kind of fun to see that we have Edward and Alice and other people. And some folks just can't decide so they'll put two or three names on their door."

Staying at the Cullen House is a must for some. One hardcore Twilight fan from Ohio stayed 72 night so far, spending about $9,000.

Today, more than 10 years after the Twilight phenomenon began, the popularity of Twilight seems like it will literally live eternally for some, whether it be via a tattoo or a custom license plate.

"Well, I got this [license plate] because I'm a huge Twilight fan and you know, other Twilight fans know what it means. Forever is how long Bella and Edward are going to love each other, you know they have forever," said Lissy Andros, Executive Director of Forks Chamber of Commerce. "It is basically the tagline of Twilight. Forever."

Lissy Andros is the executive director at the Forks Chamber of Commerce. She visited Forks after reading the books and seeing the first movie, and decided to stay.

"Once I got here, I was ready to move. So Forks, was on my list of possible places to move and when I got here I completely fell in love with it," Andros said.

Falling in love with Forks seems to be a common theme around town.

"I brought my husband up on Father's Day about two years ago, almost three now, and he fell in love just like we did," said Julie Edwards, Twilight Fan. "He looked at the town, looked at La Push and fell in love. We were here two months later."

The Forks Chamber of Commerce offers a self-guided through town showcasing all the Twilight landmarks and there are also local businesses offering Twilight tours. And while the sights are not to be missed, there is also plenty of souvenirs.

"There's nothing more fun than when someone walks in and says what's with this Twilight thing," said Andros. "And we get to tell them our experience with Twilight and the town and stuff and we're lucky here at the Chamber because our staff is really passionate about Twilight. We have several staff members that were huge Twilight fans and moved to Forks because of Twilight. We speak Twilight fluently."