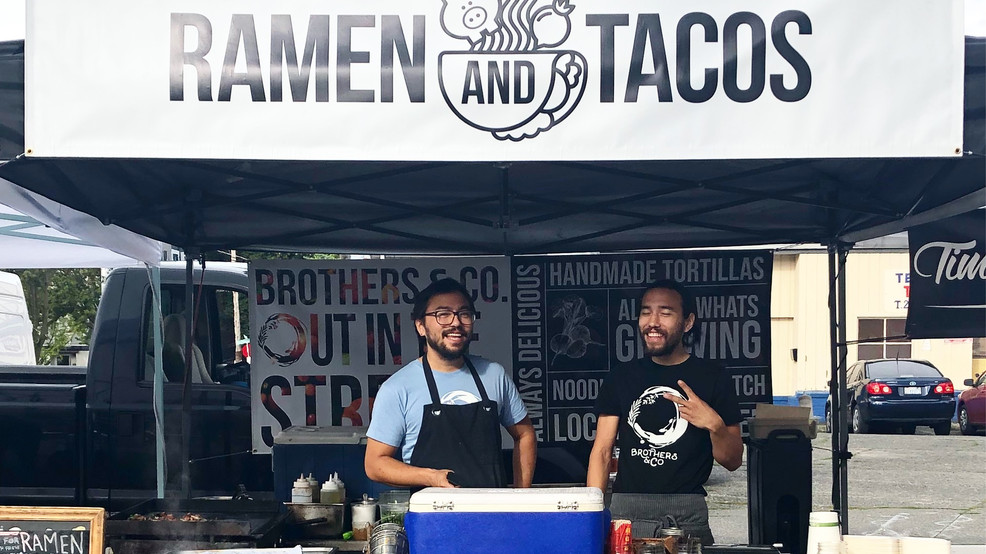 Sibling chefs behind Seattle's Brothers & Co get creative with classics

Working with a sibling can be, at times, challenging. But it can also be a recipe for culinary magic.

"I think that, as chefs, we balance each other very well," explains Zach Pacleb, who co-owns the aptly named Brothers & Co with his brother, Seth. "He's definitely the heartier, richer side of craving, satisfying. Then I, through being classically trained and working in high-end kitchens, I tend to think things through a little more esoterically sometimes."

Zach and Seth describe Brothers & Co as a multifaceted food service outfit. The brothers do private catering, but on the weekend, you'll find them at the University District and Ballard Farmer's Markets serving up ramen and tacos.

Zach and Seth grew up watching the Japanese version of Iron Chef during the early days of Food Network. Intrigued by the controlled chaos of the kitchen, Zach always knew he was headed to culinary school. But being a chef wasn't initially in Seth's plans.

"I went through the stages of wanting to be basically all the high-earning jobs on the Game of Life board: doctor, lawyer. I think those were the main ones... But, I was always an avid home cook and just let that guide me," Seth said.

Both brothers ended up working in restaurants before deciding to venture out on their own.

"The particular two items of the stand being ramen and tacos, they sort of happened coincidentally," said Zach. "One of the first series of pop-ups we did was a ramen pop-up. Seth was fascinated by making the noodles from scratch, and unbeknownst to me, he was also making tortillas at home. The first time I tried them I was blown away."

"I don't know if this was how we thought of it at the time, but every culture has some sort of flatbread dish, sandwich-type of thing and a hot noodle soup of some variety," added Seth. "It's kind of versatile. We can put whatever flavors we want onto a tortilla or into a hot noodle soup."

The brothers regularly make changes to their dishes to showcase the freshest ingredients they can find at farmers markets, but there is one item folks can always find on the menu.

"I would always recommend the animal ramen. I always get it with extra vegetables. It's definitely our most popular item, and for me, the one that is most satisfying," said Seth.

"It's just a hard combination to beat. It's very rich, especially when the clouds start to roll in and the temperatures drop. It's a very comforting and satisfying meal for anybody, really," added Zach.

The animal ramen is a dish that looks, on the surface, somewhat simple. But in reality, it hides an immense amount of nuance. Crave-worthy, yet complex. A perfect combination of these two brothers.

"You know, it's a very good balance. We definitely have our days, but the thing at the end of the day that's the best part of it is, I still love him. He's still my brother," said Zach. "It's a level of support that's different than any other type of business relationship."