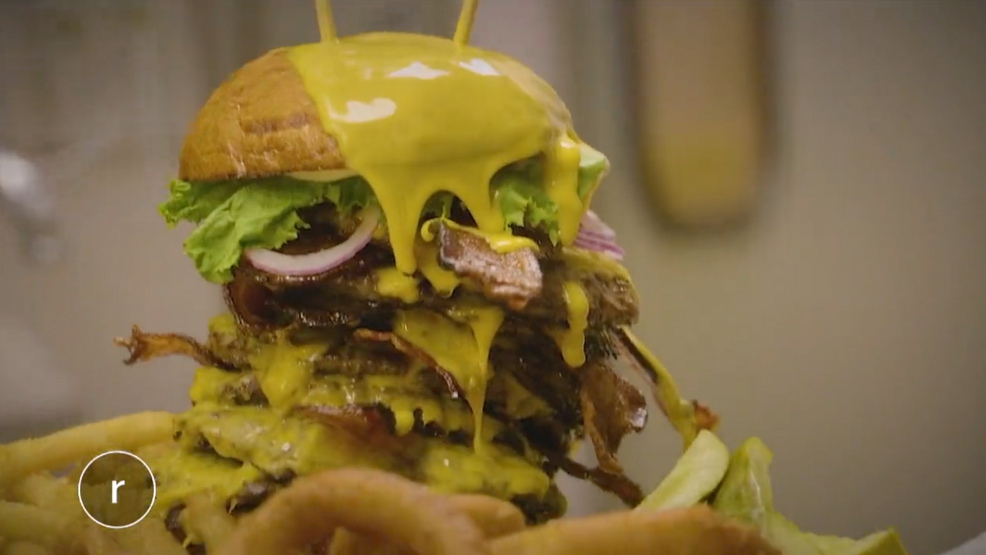 To honor all 12s and to give die-hard food challenge enthusiasts an opportunity to add another notch to their belts, Snoqualmie Café and Deli recently announced the addition of the "12s Fanburger Challenge" to their menu.
SEE MORE

An eating challenge fit for the biggest fans!

Snoqualmie Casino's new 12s Fanburger is a dish dedicated to Seattle football fans who, win or lose, are famous for being the best fans in the NFL. The tradition of the 12s recognizes fans so passionate about their team that their cheering can change the outcome of a football game, making Seahawks fans the "12th man" on the football field.

To honor all 12s and to give die-hard food challenge enthusiasts an opportunity to add another notch to their belts, Snoqualmie Café and Deli recently announced the addition of the "12s Fanburger Challenge" to their menu. Containing 12 quarter-pound, all-beef patties, 12 slices of American cheese, 12 pieces of bacon, 6 ounces of Cheez Whiz, lettuce, tomatoes, onions, and café sauce, the 12s Fanburger isn't for the faint at heart. If that isn't enough to tempt the taste buds, the burger will be nestled among 12 pickle spears, 2.5 pounds of French fries, and 12 onion rings.

Snoqualmie Casino debuted the "12s Fanburger Challenge" in November with a contest, pitching two die-hard Seahawks fans head-to-head for the prize of two premium field seats at the upcoming home game against the Chicago Bears the day after Christmas. The goal of the challenge is to consume the entire 12s Fanburger platter within the allotted time of 36 minutes. What makes 36 minutes special? You may have figured out 36 does divide by 12. True Seattle fans will appreciate the significance of the quotient in this simple math problem.

The week prior to the debut, the social media team at Snoqualmie Casino released the "12s Fanburger Challenge" to its followers on Instagram and Facebook to see if any brave souls were willing to be the first to give it a shot. Bryan Stepaniuk from North Bend and Jeremy Froelicher from Everett accepted the challenge.

Both competitors showed up with a goal in mind: claiming the title AND the tickets! To ensure a fair competition, the culinary team weighed the plates prior to the contest and again at the end to determine a winner if neither competitor finished the entire meal. Throughout the duration of the competition, the two men gave it everything they had. Bryan came with a true strategy of consuming the burger first, while Jeremy took the approach of working on the burger but grabbing some fries and onion rings along the way. Both strategies were sound, but Bryan came out victorious by consuming 4 pounds of food to Jeremy's 3 pounds of food. Bryan and Jeremy deserve huge accolades for effort and determination, so much so that they were both awarded field tickets and an exclusive 12s Fanburger finisher t-shirt.

The "12s Fanburger Challenge" is currently on the menu at Snoqualmie Café and Deli and is available to anyone who wants to see if they have what it takes to consume almost 7 pounds of America's favorite foods. Game tickets will not be on the line for the effort, but Snoqualmie Casino will make sure successful contenders walk away with the prized T-shirt.

Not in the mood for a giant cheeseburger platter? Snoqualmie Café and Deli is open 24 hours and offers breakfast, burgers, sandwiches, and more.

Snoqualmie Casino is a short 30-minute drive from Seattle and is the perfect place for a date night or a night out with friends. Check out all their offerings at www.snocasino.com.