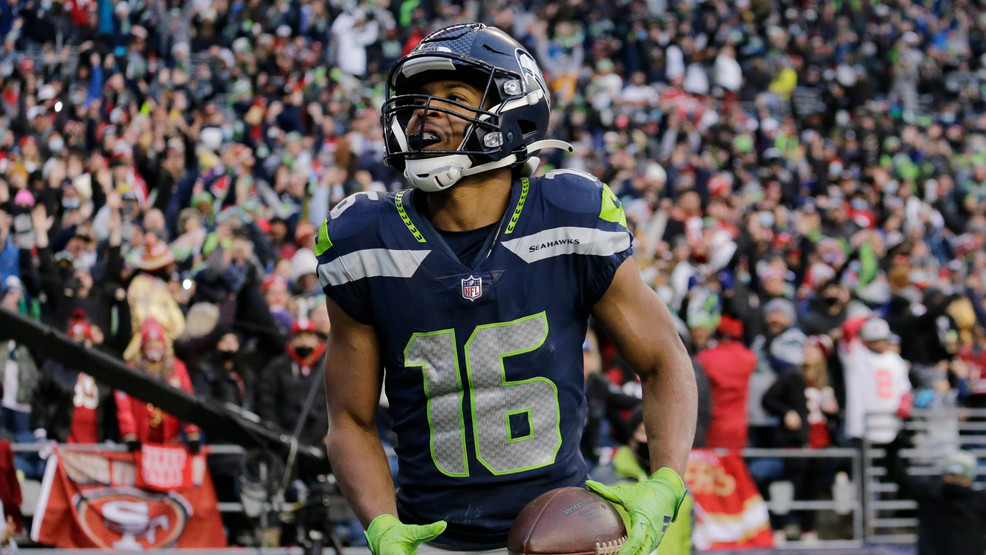 Seattle Seahawks wide receiver Tyler Lockett reacts after he scored a touchdown against the San Francisco 49ers during the second half of an NFL football game, Sunday, Dec. 5, 2021, in Seattle. (AP Photo/John Froschauer)
SEE MORE

After months of punishing hits and a grueling schedule, most NFL players would be expected to try and rest during the offseason, but not Tyler Lockett.

He went ahead and became a licensed real estate agent after the 2021 season, even listing and selling his first home.

"I ended up studying for 90 hours" Lockett said at Seahawks Training Camp on Friday.

"I ended up taking the test and passing, got my first house and listing it. It ended up being "pending" in seven days. Because of the market and how things were going at that moment, we were able to have it pending, easy close. It was really cool. I have all the stuff that is going on with it as well. Just studied the whole 180 hours in Texas right after I ended up doing that. So, I finished that class. Just got to be able to take the test and I’ll be an agent in Texas as well.”

You read that right, a star NFL player could help you buy or sell your home in Washington and potentially Texas soon.

Lockett says he got his Washington license in March after passing the real estate exam in February. The first home he listed sold for its asking price of $3.25 million in Sammamish.

And he's not done, even with training camp in full swing.

"I am representing buyers and everything, so I actually have something that’s pending right now, but I got to stay on it" Lockett told reporters, noting the similarities between working with families and his football team.

"When you’ve got someone depending on you, for us football players, some people have their families depending on them so you have to be able to learn how to function in a healthy way with people still depending on you to do everything that you can to fit the best interest of your client or your family or your friends.”

You might ask yourself, after 45 career receiving touchdowns and eight in 2021, is there anything Lockett can't do?

It turns out, real estate developed into a dream of his, one that he achieved just like he did for his goals on the gridiron.

"That’s something that I’ve always wanted to do ever since I started to buy my first house once I signed my second contract. I watched a lot of HGTV growing up. At first, I didn’t like it and as I started looking for a house, that’s all I started to watch. Just being able to take the test and take the class, that was the hardest part."

Of course his next goal is to help the Hawks defy expectations and make a run to the playoffs but make no mistake, he's not nearly done with his newest venture, either.

And yes, he's always on call ready for the next real estate transaction.

“I’m on my realtor phone more than my personal phone, but I mean it’s not hard. There’s a lot of different stuff that you can do. Let’s look at it like this, if you have a buyer you can go look at the houses with a buyer or you can have somebody else go look at it. Usually, I want to go look at it like that too, but once you end up writing the offer down and you go into that closing stage, you can either go through the process and do it yourself or you can be able to hire a TC (transaction coordinator) to do it. Therefore, during that closing period you have a TC that’s seeing it all the way through closing, so you don’t really have to have anything to do with it. You just want to stay conversing with your client and make sure everything is going great, but while everything is going on, yeah I have all my hands in it even as stuff is pending, I still have my hands in it because you never know when you have to be able to say something with the inspections, or when you have to be able to say something to your client so you always got to be ready for it.”

Inspiration for so many in Seattle and across the country.