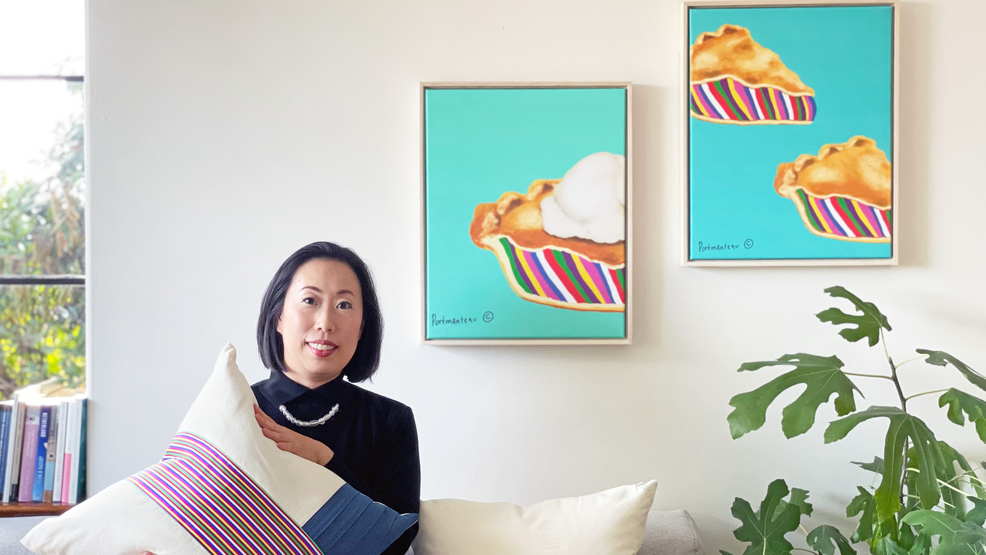 Sunny with some of her decor. (Image: Heleyna Holmes Photography)
SEE MORE

Sunyoung Hong (nickname: Sunny) describes herself as a "designer with an entrepreneurial spirit on a quest to bring multicultural home decor into mainstream culture." Her new home and lifestyle company Portmanteau Home, inspired by a diverse America, embraces Japanese, Indian and Korean heritages .

Hong's early childhood was spent in Korea, but she's moved around quite a bit since then, living in D.C., New Haven, Boston, San Francisco and Honolulu. She's now been in Seattle for close to 15 years.

She's always been interested in art and design; after college, she had a brief stint working as a graphic designer.

"I went back to school to get a master’s degree in architecture and worked for an architectural firm that specialized in high-end hospitality design," she said. "Since the kids were born, I mostly did design consulting on the side and stayed home as a full-time mom."

Portmanteau Home’s debut collection launched September 1, but Hong says the project has been in the works for a year.

"Truthfully, I’ve been preparing for many years on some iteration of this idea of representing mixed-race people, but it was only recently that all the pieces came together in a way that made sense."

Even before her kids were born, Hong faced challenges in navigating her own cultural identity, "like not being Korean enough amongst some groups but being too Korean in other groups," she said. "I felt like I needed to have two versions of myself, one Korean self that went by the name of Sunyoung and one American self that went by Sunny, so that I could ‘fit in’ with whichever group I was around. I suppose this is a fairly common shared experience amongst many second-generation Americans and immigrants, and even more so for mixed-race individuals, but the experience caused a lot of self-doubt and insecurities for me."

That dichotomous cultural identity shaped how Hong experienced the world, so when her mixed-race kids were born, she felt determined to get things right. She wanted to make sure they grew up feeling comfortable in their own skin and able to embrace their heritage, without the shadows of ‘not being enough’.

"While I had the right intention," she explained, "I don’t think I had the right language to approach the issue. When my kids were just old enough to understand that mommy and daddy had different colored skin, I started the conversation about race and ethnicity. My first few attempts involved words like ‘half Asian’ and ‘half white’ which resulted in my daughter declaring that she and her brother were ‘half raisins.’"

Hong now thinks that using words like ‘half’ contributes to feeling like you have to choose a side, or maybe can never be whole in either culture.

"Nowadays, I try to frame the discussion with words like ‘part blank’ and ‘part blank.’ Honestly, I still don’t feel like I’ve mastered how to talk to my kids about their multiracial identity, but I’ve become much more mindful about the words that I use to talk to them."

Ultimately, Hong decided to use her experience as a designer to address the problem visually; hence, Portmanteau Home was born.

"I wanted to create products that they can see around their home and use in their daily life to show how blended heritage can be beautiful, whole in its own right," she said. "I wanted to create a visual portmanteau of cultures."

Here in Seattle, Hong has always seen many mixed-race families.

"Even beyond my little bubble, America seems to be becoming more diverse, and more families are having conversations about race, " she said. "I want to acknowledge this group of people and give them a visual way to express and validate their cultural identities. I want people to be able to decorate their homes to be more than just beautiful; I want people to have a way of creating meaningful homes that tell the stories of their mixed heritage. I want people to be able to easily and beautifully share their cultural identity. Most importantly, I want mixed-race kids like mine, not to feel like they have to choose between two cultures. They don’t have to be Korean OR American. They can be both."

Hong admits that creating Portmanteau Home was a big leap after being a stay-at-home mom.

"I’m proud of the fact that all of our products are design-driven and original," she said. "I’m also proud and grateful for having an opportunity to work with an amazing group of people who genuinely support the mission of the brand. All of our products are made ethically by a wonderful local sewing workshop right here in Seattle, and when possible, I try to seek out people who are mixed-race and in mixed-race relationships to work with."

In addition to learning every aspect of entrepreneurship, the most unexpected challenges have been difficulties brought on by COVID. Hong hoped to work directly with small textile coops or vendors from around the world, but due to travel restrictions, was limited to sourcing online and through a small personal network.

"I had to rely on how they looked on screen rather than being able to touch and feel the fabric, so there were many trial and errors in finding the right fabric to work with," she said. "Then there were supply chain issues like many other businesses faced."

Hong says the most rewarding part of this journey has been seeing people feel validated.

"When I come across people noticing and identifying with the Saekdong or Banarasi fabric as something from their own culture, they light up and start sharing their own stories," she said. "Seeing these authentic ‘ethnic’ fabrics paired with classic American denim is kind of like seeing your name on one of those personalized key chains at theme parks for the first time; like seeing the visual affirmation that you’re part of America."