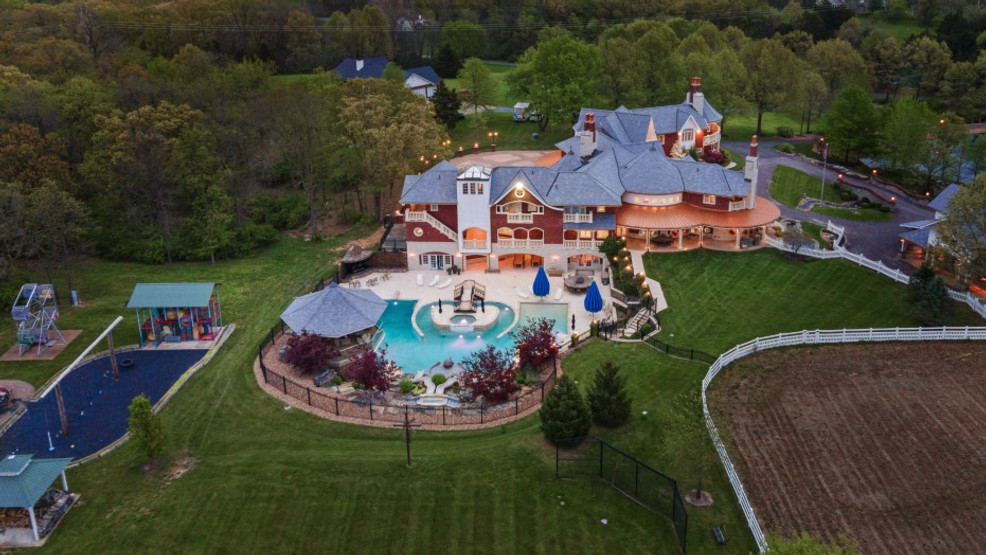 Built in 2001 on over 20 acres and located just outside of St. Louis in Wentzville, this humongous 15,638-square-foot home might be the most entertaining house in the country. Stunning from both air and ground with a lake, the home has almost everything one could ever want to do - including a children’s Ferris wheel - to stay entertained in even the longest lockdown. It's priced at $20 million. (Richard Taverna for Sotheby’s International Realty)
SEE MORE

From the same town that brought America its first ice cream cones and where 7-Up was invented, home of the largest beer producing plant in the nation, first American city to host the Olympics, has an urban park bigger than New York’s Central Park, where MLB pitchers-brothers Dizzy and Daffy Dean were big stars, a world-famous zoo and botanical gardens, host to the famous 1904 World’s Fair, the NFL's Greatest Show on Turf football team, and a town that welcomes visitors by boat on the Mississippi River or car on I-44 with its 630-foot-tall Gateway Arch, a mansion is for sale that fits right in with the fun things from St. Louis, Missouri. An estate that rivals most resorts.

It was put on the market in early June for $20 million.

Built in 2001 on over 20 acres and located just outside of St. Louis in Wentzville, the humongous 15,638-square-foot home might be the most entertaining house in the country. Stunning from both air and ground with a lake and miles of white equestrian fencing, the home has almost everything one could ever want to do - including a children’s Ferris wheel and Jeep ride - to stay entertained in even the longest lockdown. There are seven bedrooms, 13 baths, formal living and dining rooms as well as the informal version of each, a two-story library, two gyms, laundry rooms on two floors, boardroom, conference room, large kitchen with two islands and clerestory windows, inviting family room off the kitchen with fireplace and an impressive theater room. An elevator covers the second-floor bedroom level to the lower entertainment floor.

A never-ending array of things to do begins on the lower level with colorful bowling lanes, well-supplied game rooms, dance floor and bar. The outdoor resort-style pool has a lazy river, swim-up bar, two slides, a grotto and waterfall and a two-story pergola overlooking it all. There is a children’s playground, horse stables, and a professional-style gym. Equestrian facilities include a riding ring, paddocks and plenty of land to ride horses (up to 130 acres are available). Games on the lawn include soccer and baseball fields, the Ferris wheel, and there is a four-car garage with oodles of parking available for guests. A separate events center offers full court volleyball, basketball and can be opened to the covered patios to host a wedding for 200!