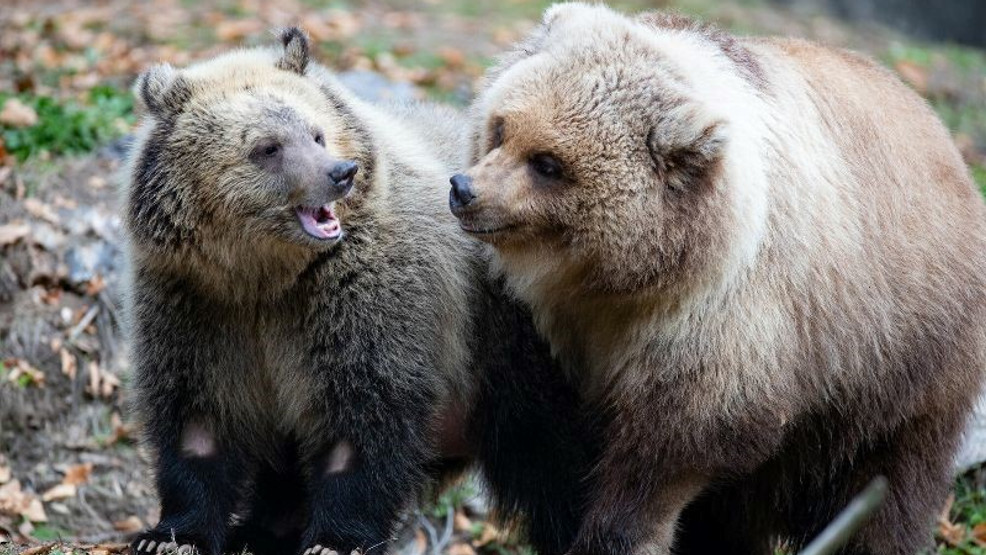 Bear fans can enjoy Woodland Park Zoo's new brown bear cubs in the Living Northwest Trail. Fern on the left, a grizzly bear, and Juniper on the right, a brown bear, are rescued female cubs born this past winter in Montana and Alaska, respectively. (Jeremy Dwyer-Lindgren/Woodland Park Zoo)
SEE MORE

Fern was born this past winter in Montana and arrived at the zoo in October after Montana Fish, Wildlife & Parks had to euthanize her mother. Zoo officials said she currently weighs 167 pounds and can be distinguished from Juniper by her longer snout and smaller stature.

Juniper was also born this past winter and arrived at the zoo in August after she was found wandering alone near an air force base in Anchorage, Alaska. She currently weighs 256 pounds.

Both of the cubs are too young to survive on their own and as such, they were brought to the zoo. Bear cubs learn everything they need to know about survival from their moms including hunting and foraging. Brown bears are also not rehabilitated, the zoo said.

Zookeepers said Juniper has helped Fern acclimate to her new home much faster than usual. "The cubs are fast becoming best buds and Juniper has taken Fern under her wing," animal curator Erin Sullivan said.

The Living Northwest Trail exhibit is meant to mimic the bear's natural environment. It has a wealth of enrichment including a flowing stream, a bear-sized pool with live fish, rocks for basking in the sun, tree stumps for scratching posts, and a quiet cave for winter naps.

Brown bears and grizzly bears belong to the same species and scientifically speaking all grizzlies are brown bears but not all brown bears are grizzlies.

For information on visiting the zoo, go to the Woodland Park Zoo's website.