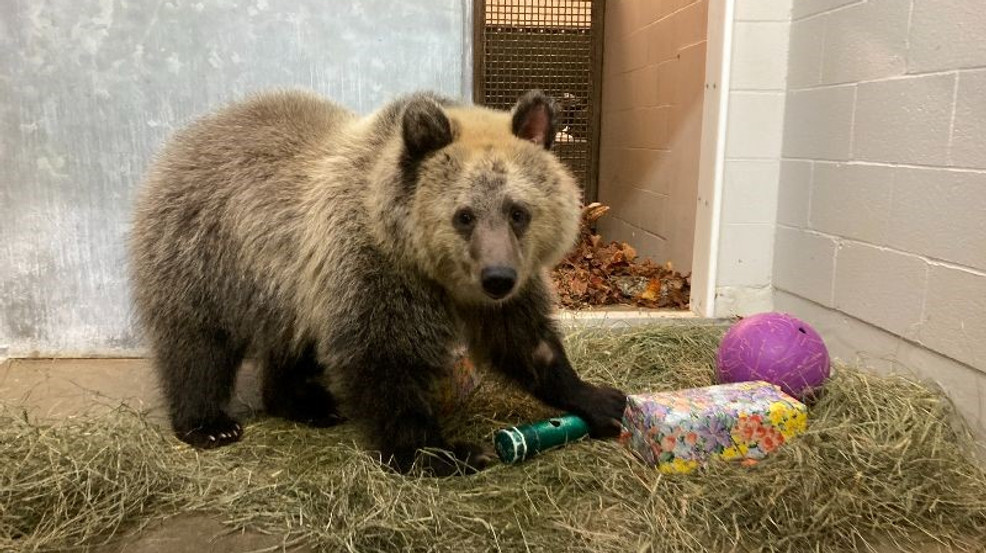 The zoo said the female cub was named Fern by Maryanne Tagney and David Jones, who are longtime supporters of Woodland Park Zoo's conservation efforts.

"We were honored to be asked to name little Fern, the zoo’s adorable new rescued grizzly cub! She is a living and breathing example of the critical wildlife conservation work that we have been supporting since the zoo first created the Living Northwest Conservation Program,” said Tagney.

Fern was born last winter and weighed 95 pounds when she arrived at the zoo. The bear cub is currently at the zoo’s hospital in quarantine, which is standard practice for new animals.

Fern was brought to Seattle from Montana in early October after its mother was euthanized by U.S. Fish and Wildlife Services after multiple encounters with humans. Officials said Fern’s mother frequently broke into a home that had no unsecured attractants or food, killed chickens secured by electric fencing and broke into a compound. She was also undeterred by hazing efforts including rubber bullets, paintballs, electric fencing, and noise-making devices.

“Bears are extremely smart and resourceful and can have more than a 2,000-mile home range. Even moving ‘problem’ bears to a remote location is generally not successful in the long term, as was the experience for this cub’s mother,” said Kevin Murphy, senior director of Animal Management at Woodland Park Zoo.

The zoo said Fern will go through “behavioral training” to get acquainted with her caretakers after the cub is moved to the bear habitat.

In July, the zoo welcomed another female brown bear cub who was found wandering alone at an air force base near Anchorage, Alaska. Biologists believe the cub, who was named Juniper, was born last winter as well.

The zoo said animal keepers will do a series of introductions with Fern to the outdoor habitat and to Juniper.

"Juniper has fast become the zoo’s new darling and has endeared herself to zoo-goers and fans. Our community is going to love watching Juniper and Fern grow up and we’re confident the two bears will bond and become companions for many years,” said Murphy.

Both bear cubs will live at Woodland Park Zoo’s Living Northwest Trail. Another bear, a 28-year-old grizzly named Keema, will also live in the bear habitat.