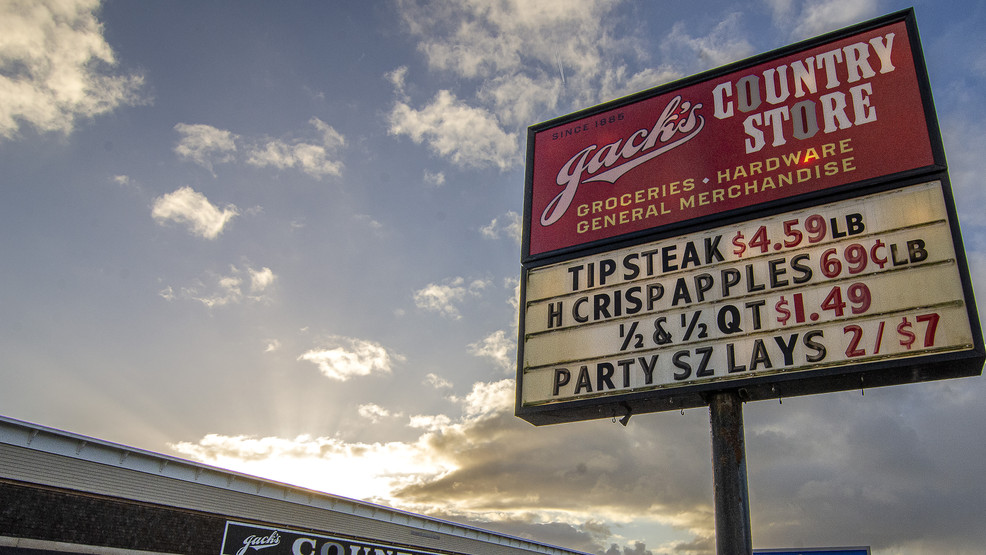 Where is the longest running retail store in WA? Ocean Park

We drive along the two-lane highway heading north up the Peninsula. No more than 10 minutes pass and we see it. It's huge! Just as the urban tales described it. Jack's Country Store takes up a whole city block starting at the main intersection, well really the only 4-way intersection in this small, seaside town of Ocean Park.

A sign in the window tells it like it is: "An Old Store. Lots of Stuff". Both of which have made this retail store infamous, at least around these parts.

Jack's Country Store has been serving this community since 1885, making it the longest-running retail establishment in the state of Washington. With this kind of longevity also comes a rather colorful history.

Founded by J.A. Morehead and Co., the business changed hands a few times to varied owners. The first sale was to Mr. Trondsen & Sons in 1915, where it stayed in the family until 1956 when it became Henrichsen's Grocery. Then finally its last incarnation began in 1969 as Jack & Lucille Downer purchased the store, and it's still being run by the Downer family today. They've placed signs paying homage to these past owners inside the original section of the hardware store, gently reminding shoppers of its history and original inception.

Back in those first days the Downers took ownership, Ocean Park was a very different place. Primarily a commercial fishing town, the economy largely focused on its clamming and oyster industry. Today, fishing is still king for this small town and Jack's is right there supplying all the necessary clamming, fishing, and oyster catching supplies any weekend DIYer needs to make that big catch.

Over the last 50 years, Jack's grew with the times and with the town. Change became a constant process. During their first year of ownership, the Downer's added on to the existing storefront, almost doubling the square footage. Up until then, indoor plumbing was nonexistent so this was added, along with hot running water and a new electrical system. Eventually, the Downer's purchased even more real estate - allowing Jack's to grow to its current 25,000 square feet size (most of this is a dedicated sales floor).

And the Downer's continued keeping up with modernization. As Ocean Park became a popular tourist destination, the couple saw the need to grow too. They extended store hours to include weekends and added to their inventory. In fact, Downer was known to say "Even in a town the size of Ocean Park, you can make a living selling what others don't have". And Jack's became known for doing just that.

Even today the store is bursting to its rafters, literally, with merchandise a person may need and certainly may want. As I walked among aisles of treasure and trinkets, the general manager Grant Lehman occasionally reminded me to "look up". Above me in the paint department an assortment of old tools collected by Downer hung on display. And walking down the chip and soda aisle towards the dairy department I looked up to rows and rows of flags - from every state, Harley Davidson flags, Cascadia flags, and more.

These are unorthodox ways to display their merchandise. Every shelf, nook, and cranny is packed with wares. It is simultaneously a curiosity as well as a bit overwhelming. Those hard to find items? They are here too. In fact, strolling down the cooking aisle the wall of Lodge cast iron cookware caught my eye. Looking on a lower shelf, as opposed to up, I spot a baking pan I could not find online or in big box stores. Yes! It was here at Jack's, in Ocean Park, the store that has everything anyone would want or need.

It is also the pulse of this town. The staff at Jack's are like family, many of whom have been with this company (one of the largest employers in the area) for 5, 10, even 20 years or more. They raised their families and paid their mortgages while working at Jack's. They are as much the heart of Jack's as Jack's is the heart of this community.

The next time you find yourself cruising along the Long Beach Peninsula, stop in and stock up for Jack's is the first store of one-stop shopping. You never know what you may find.

While some of the products, services, and/or accommodations in this post were provided without charge, all of the opinions within are those of the author and the Seattle Refined editorial board.