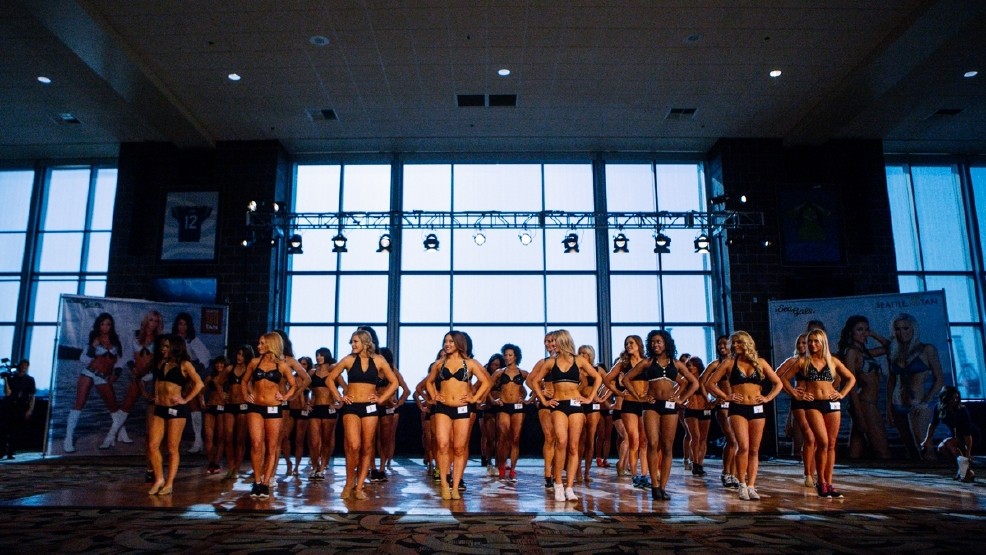 After three rounds of tryouts, the Sea Gals final audition ended with 46 girls trying out for 30 spots. Each girl performed a choreographed routine and was judged on appearance, dance ability, and personality. The audition was live streamed on Seahawks.com to thousands of people watching online. (Joshua Lewis / Seattle Refined)
SEE MORE

What does it take to be a Sea Gal

An overwhelming amount of hairspray, booty shorts and aura of excitement filled the
Virginia Mason Athletic Center on April 25th. it was the notorious first day of tryouts to be on the Seahawks Cheerleadering squad, the Sea Gals.Over 150 women, fit and ambitious from all professions and ages, showed up. For some this was their first time competing, while others confided that it was their sixth. None admitted to being nervous, but the third application of lipgloss and concerned smiles gave them away. Each of them seemed to want the title of a Sea Gal just as much as the other girl in line. Most had had months of preparation with dance classes, workouts and studied the squad and football team obsessively. However, what made some women stand out more than others? What would make the coaches say, "That's the one we want to represent the Seahawks and 12th Man?" Sherri Thompson is the only person who can answer these questions perfectly. Not only has she been the Sea Gals' Director for almost 30 years, she was a Sea Gal and their choreographer years prior.Thompson has a set of requirements for contestants before they do their first move in front of the panel. "The qualities a Sea Gal should have are talented dance & performance skills, fit and attractive appearance, and an intelligent and warm personality. They must also be at least 19 years old," she said. Since the Seahawks and 12th Man great rise to fame over the years, the cheerleading squad has had to raise standards too. Kelly Strickland can contest to this; she has has been a hopeful applicant five times prior to this year. "Every year gets more difficult and competitive," Strickland said. "You come back every year with a new level and then that level has already been raised.""The standard has become much higher regarding dance skills over the past few years," said Coach Thompason. "Sea Gals must be able to do clean double turns, high leaps, etc. Most Sea Gals have had years of dance training."However, the director's high standards are not solely based on outward talent. There has to be a lot more than what meets the eye, as the squad is involved in charity fundraisers and community outreach."The perfect Sea Gal is beautiful both inside and out. She is a person who strives for perfection in all that she does. She is confident and yet humble. She enjoys working with all types of people and the heart to be a helper and a mentor," Thompson concluded. After three days of tryouts and eliminiation, the squad of 30, both rookies and veterans, was chosen on May 3rd at the CenturyLink Stadium, a perfect end to the tryouts and beginning to the journey of being a Sea Gal.