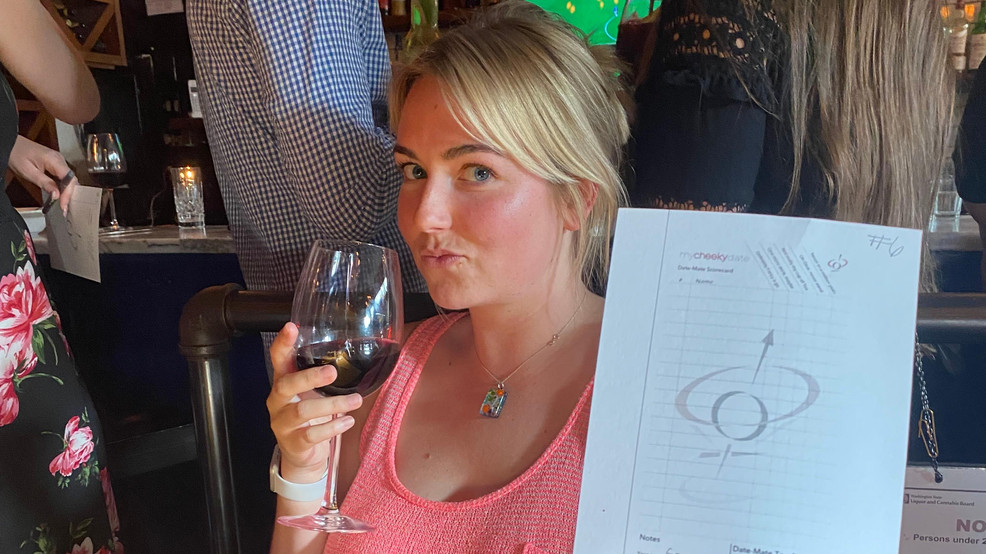 We tried speed dating and it was an *absolute* blast

Now that the cat's out of the bag, I’d like to preface this article by saying that I never thought in a million years I would ever go speed dating. I thought it was mostly something you’d see in movie montages where the "eligible" bachelors were anything but and the strong female lead had a permanent grimace on her face like "I'll be single forever," kinda vibe.

Here's how I got looped in. My best friend Claire texted me one day asking if I’d like to try speed dating. Claire’s roommate Shelley was going to try it and Claire was supposed to join but had recently made her current relationship Facebook official so she was off the proverbial speed dating table. I agreed, thinking it would be nice to join Shelley and I *literally* have nothing to lose. The worst that could happen would be a wine night with the gallies and who doesn't love those?!

I’d like to state for the record, Your Honor, that I absolutely loathe dating. I love men (I swear, I’ve been boy crazy since my first day Earthside) and I love flirting and all the fun stuff that comes along with those first-time butterflies, but I have never, ever been successful at dating, or should I say dating apps, since that seems to be the most popular way of meeting new folks.

I typically meet men "in the wild" since my Venus is in Aries (for all you non-Astrology folks out there it just means I’m very forward, fickle and fiery in love). But that being said, I have been on some Hinge dates in the past. Some decent, some horrible. I literally had to do the ole 'Oh look, I need to take this phone call' trick and had to "leave" to go meet a friend. Sorry, not sorry!

The thing that is so tricky about apps and faulty by nature, is that you are choosing potential matches strictly based on their looks. Yes, physical attraction is so important and if your date is easy on the eyes, that’s an absolute bonus! But just because they look nice doesn’t mean anything about attraction.

This is definitely not rocket science and let's say it all together now, ATTRACTION ISN’T ALL PHYSICAL.

There have been times when I go out on a Hinge date and think "Wow, this is the most beautiful man I have ever seen," but even still, I don’t feel that intangible spark that makes you go whoa.

So, why not try it the opposite way? Going into a situation where I had no idea what the men would look like but I'd be forced to talk with every. single. bachelor, regardless of if I thought they were good-looking or not.

We headed up to Capitol Hill and went to an Argentinian Steakhouse and Bar called BOCA where the event was being held. First things first, we ordered a fat glass of wine and Claire’s roommate and I sat in our rotation. Claire sat at the bar, observing/taking photos/shooting the shit with the bartender while also keeping an eye on our drinks in case they got low.

Of course, I had internal moments of like, "what the heck am I doing here?" But as soon as we started the "dating," it was an absolute BLAST.

There were nine boys and seven girls and each date had a dedicated six minutes. Each dater got a number and a score sheet, so when you’d sit down with a new suitor you’d each exchange names and then score each other at the end of each date. If you both matched with each other, the host would send you both each other's emails and you can crack on from there!

All of my nine dates were wildly different, but all wonderful in their own ways. Right off the bat, I knew there wasn’t anyone there that I was physically attracted to (does that make me sound mean)? But what I found, which is literally the exact opposite of dating apps, is that I was attracted to a lot of these guys' personalities and who they were as people.

I met an interesting cast of characters. I met a man from the Ukraine who shared his perspective about the war and how it has affected him and his family. I met a guy who opened up about his abusive mother and difficult childhood. I chatted with a handsome navy sailor from South Carolina. I even talked to a guy who asked me if my friend Claire was single!

I met a good-looking bartender who I bonded with over the fact that we love our jobs and how we feel like it's sharpened our people skills, making speed dating feel like a breeze when all you do for a living is talk to strangers. I talked to an Amazon techie who was so nervous, sweaty and shaky, I wanted to reach over the table and give him a hug and tell him to breathe!

At the end of the night, even though I had made no romantic connections, I felt like I had spent the last hour having super meaningful and intriguing conversations. I left with a full heart and feeling inspired by some of the men that I met.

My biggest takeaway from the experience was that speed dating is a way more fun and even more intentional approach to dating. Dating apps can get so passive! Even when your matches message you, it can get kind of lost in the day-to-day of your phone because it becomes like any other app with push notifications—easy to ignore.

With speed dating, you are fully present, fully immersed in this experience of okay, do I actually genuinely have a connection with this person? And think of all the time you can save! No more scrolling on your phone, getting several matches, chatting and eventually ghosting each other.

If anything, grab your girls and go for a laugh! Who knows what you will find :-)