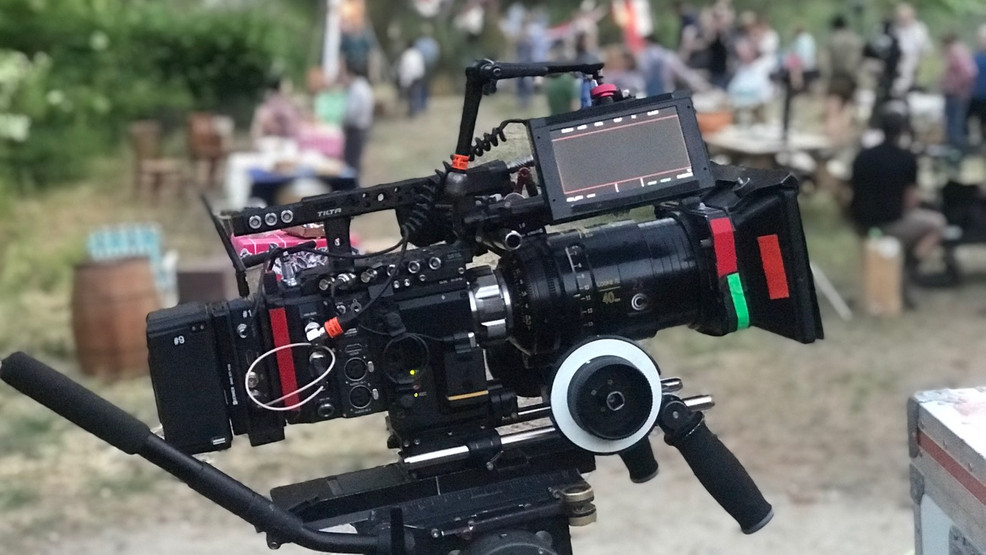 Behind-the-scenes of the film "East of the Mountains." (Image: Couresty of Dave Drummond)
SEE MORE

WA gets the ok to return to film production - but what does that look like?

For all those seeking to work on a film production in Washington, there was some recent good news from the Governor's office. In-person production was given the go-ahead to start as long as these shoots are taking place in counties that are in Phase 2 and above. Productions would still have to abide by a series of rules ranging from requirements about how "over the shoulder" shots must be constructed to hair and makeup safety rules.

Amy Lillard, executive director at Washington Filmworks, has been sorting through these procedures and is set to host a virtual discussion at 11 a.m. Friday, July 17, about how to return safely in a post-COVID-19 world. She has high hopes the film industry will come together and support each other amidst the rules about how production can proceed.

"Everyone in the industry is acknowledging that this will change production short term until we have some kind of vaccine," Lillard said. "We continue to be deeply committed to the safety of it all. It is truly this sense of community that is driving people as they go back."

A staple of this community in Washington is location scout and manager Dave Drummond. He has worked on iconic films from the region, such as "Safety Not Guaranteed," "Captain Fantastic," "Prospect" and "Laggies." You can also see his name in the credits of "Twin Peaks: The Return," "Grey's Anatomy" and the recent Hulu series "Three Busy Debras."

He most recently worked on the upcoming film "East of the Mountains," starring Mira Sorvino. After a long lull when everything shut down, Drummond is now finding himself fielding more inquiries about how things can proceed.

"I'm doing some preliminary scouting for a few different things. None of which are 100 percent going to happen yet," he said. "Everyone is just trying to find their way, but they're hoping that in August and late July, they could do so safely."

While Drummond still can't get a permit to shoot in Seattle, he is looking to other potential locations.

The allowing of production to resume has Drummond looking forward to working, but he stressed this might be a short-lived return.

"In the very near term, I'm cautiously optimistic about some level of work returning," he said. "If we do enter a true second wave or the fall is worse than the summer or the trends continue in this negative direction, I get pessimistic really fast. I think we'll be one of the first things to close back down again."

Producer Marc Dahlstom has worked on Washington-based projects such as "Z Nation," "Home Sweet Home" and the upcoming "All Those Small Things," starring James Faulkner. Dahlstom shared his perspective as a producer and how he also has hope for productions that have been ready to go.

"There are a number of projects that have been in the hopper and waiting for the Governor to approve production to start up again in the state of Washington," he said. "I'm generally an optimist. I would hope that we could get our projects shot in the Spokane area this fall. There are a number of them that are ready to go as soon as they feel it's safe enough."

There are broader questions about insurance and getting everything approved internally though Dahlstom is not alone in seeing potential to start relatively soon if the situation allows.

"I'm optimistic that we'll get something before the end of the year," he said. "I was on with another Producer for a project, and he would like to shoot late October. But again, it's all COVID based."

There is still a lot of this uncertainty, though not for lack of people's enthusiasm to return.

"If COVID doesn't cooperate, we'll have to do it next May," Dahlstom said. "All the crew members I've talked to and the film community I communicate with, they're all very anxious to get back to work."

However long or short this wait ends up being, there won't be a lack of material to put to screen.

"The one upside to this whole experience, I think there are a lot of folks that are just saying, 'Okay, I gotta stay home. I'm self-isolating, so I'm going to write, or I'm going to paint, or I'm going to do my art,'" Dahlstom said. "I think from a creative standpoint, there is hopefully a lot of good work being created that at the end of this will come out, and we'll have some interesting stories to tell and some good scripts."