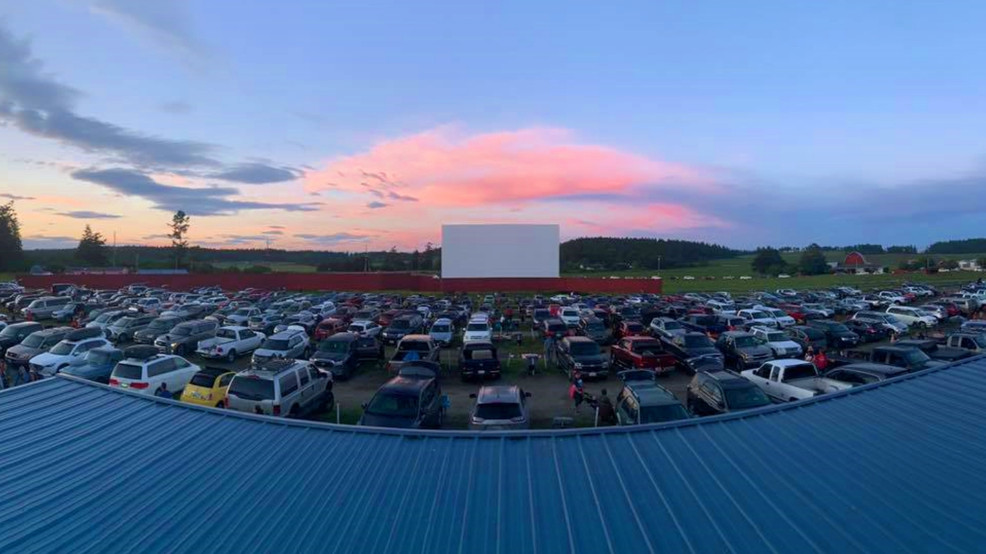 The resurgence in popularity for the humble drive-in movie theater is one of the silver linings of social distancing. People in the United States have enjoyed this form of entertainment since 1933 when the very first drive-in opened its gates in Camden, New Jersey. These theaters saw the height of their popularity throughout the 1950s and 60s when there were about 5,000 of them across the country.

Those of a certain age have fond memories of dressing up in their pajamas and packing the car with blankets and pillows. Mom would pack along a butter-soaked grocery bag full of popcorn. The family would travel to Thunderbird Drive-In in Marysville, Puget Park Drive-In in Everett or Sno-King Drive-In in Lynnwood, where the kids would play on the playground waiting for it to get dark. The double-feature would begin with a couple of Disney cartoons, and the night would end with Dad carrying the kids to their beds. Anyone else feeling nostalgic?

Today, there are less than 500 drive-in theaters in America, and five of them can be found in Washington. They are all pretty old, and honestly, they look it — but that's also some of their charm. Most of us will have to drive a long distance to experience a drive-in today, and while the current conditions have changed things somewhat, the experience is pretty much the same. In fact, in a lot of ways, better than you remember! Most theaters no longer use the old speaker system —instead broadcasting the sound directly to one's car radio, which sounds a lot better than the old way. Some of the theaters have also done away with reel to reel film and upgraded to digital, making the pictures appear much brighter.

If it's been a while since you visited a drive-in, chances are good things have changed while you've been away — even more so during this pandemic.

While we wait for Hollywood to release new movies, the local theaters are offering showings of older movies with discount prices. Often you can get the whole family in for $10. But there are a few catches. You'll want to order tickets ahead of time as there is reduced capacity. Many of the playgrounds are not available during this time, and no one is allowing outside food inside their theater space. Before you balk at that, understand that most of the theater's revenue comes from concession sales, and by purchasing from them, you're helping a local business survive! Because of this, some have upped their game on their food offerings. Sure, you will typically find popcorn, hamburgers, hotdogs and pizza, but overall, the menus are surprisingly extensive, making this dinner-and-a-show combo a unique one.

Most discount movies are shown rain or shine. Some allow you to bring your dog while others don't. It should come as no surprise that alcohol, marijuana and firearms are not allowed, and violators can be asked to leave or barred entry.

During this time, per Washington State law, all guests must wear a mask if they are away from their vehicle for any reason. Usually, you are allowed to sit in an uncovered bed of a truck, and guests can sit right in front of their cars in lawn chairs - as long as they don't block anyone's view. Most require that you stay in your vehicle unless going to the restroom or snack bar, and even so, they are asking that only one person do so at a time to avoid crowding.

And here are your choices. We recommend that you visit their web or Facebook page for the most up-to-date information:

The Blue Fox isn't only popular among those in the PNW; it recently got some from Mental Floss as being one of the 50 best drive-ins in the United States! In addition to showing movies, they also offer Go-Kart rides ($7) and an arcade during the day. Currently, it is just $10 per carload of people, but you must reserve your spot ahead of time online, and no walk-ins will be allowed. When new movies are offered, expect the prices to be raised to $7 per adult, $1.50 for kids ages 5-10 and free for kids age 4 and younger. Save .50 cents per person when paying with cash.

The Rodeo Drive-In has been standing since 1949, and it is the largest location offering three screens of movie entertainment. All movies are double features. During normal times, they can pack in up to about 1,000 cars. Admission is $10 for adults, $7 for kids age 12 and under as well as seniors age 55 and up. Kids ages 4 and younger get in free. They are open Friday through Tuesday (closed Wednesday and Thursday).

Those lamenting the chocolate popcorn found at the Cinerama can take heart knowing that the Rodeo offers a chocolate mix of popcorn. Other unique food items include fish & chips, pizza dogs, Philly cheesesteak sandwiches, gluten-free chicken sandwiches and the amazing "cheesecake chimis" (deep-fried raspberry cheesecake bites). They also offer items you wouldn't think about like wet towels to clean off your windows, radio rentals, mosquito bands and citronella candles.

Surrounded by Evergreen trees, the Wheel-In Motor Movie has been saying "Howdy Pardner" since 1953. They are currently offering a "Greatest of All Time Drive-In Hits" each week with admission $15 per carload. Wheel-In is open Wednesday through Sunday. When things get back to normal, the pricing is $9 per adult, $7 for kids age 12 and under and seniors age 65 and older and kids younger than 5 get in free.

Many of their concessions are fresh, made-to-order items including pizza, hamburgers, hot dogs, nachos and more, and they will deliver right to your car!

Auto-Vue first opened in 1953, but many of the people commenting on their Facebook page admit that this was their first drive-in movie experience and a good one, and they praised the food, too! Nothing complicated here — admission is $15 per carload. They are open Friday through Sunday. They serve typical drive-in movie food, including made-to-order pizzas, hamburgers, nachos, hotdogs and the popular German hot dog. No lawn chairs are allowed at this time.

You'll get the biggest bang for your buck here — just $5 per carload! You'll be directed on where to park, depending on the height of your vehicle, so you don't get to choose. "If you're not happy with the available parking stalls, refunds will be given as long as the first film has not yet started. You can request a refund from the manager at the snack bar," said management. The deals don't end there — the deluxe cheeseburger meal comes with curly fries and a medium drink for $10; a kid's cheeseburger meal is $6.50 and a kid's hot dog meal is $4.

Other "Drive-Ins" to Consider:

The Puyallup Fairgrounds will be partnering with the Puyallup Food Bank for their annual Drive-In Movie Night on Saturday, Aug. 22, featuring the 35th anniversary of the movie, "The Goonies." Admission is free, but it is highly encouraged you bring along a few canned food items to donate. Concessions will be available for purchase, with proceeds benefiting the Washington State Fair Foundation. Plus, the Fisher Scone Wagon will also be on-site! (*the event is a first-come, first-serve basis until capacity is reached).

The ShoWare Center is presenting its drive-in experience with the Kent Downtown Partnership and the Kent Lions Club. Double features are being shown Wednesdays through Sundays at 6:30 p.m. and 9:30 p.m. Tickets are $20 for motorcycles, $30 for general admission parking and $40 for premium parking.

Boasting being Seattle's "best drive-in movie series of the summer," Marymoor Park is the host of three different movies presented each week through Aug. 27. Tickets are $25 per carload.

Vasa Park Resort is hosting three different genres of films every week. Tuesday is Kids' Night, Fridays are set aside for action films and find a date for Saturdays, as it reserved for romcoms. Tickets are $25 per carload.

What better place to watch a drive-in movie than a museum dedicated to cars? Register online and then drive on up to Haub Family Field next to LeMay's Tickets are $20 per carload.

Open Space for Arts and Community and Vashon Theatre have partnered up to present outdoor movies Wednesday through Saturday until Labor Day. Ticket prices vary. Visit their website to see the many options.

This film series is so popular, only one night, Aug. 8, is still available for tickets, which is $25 per carload.

Walmart has announced that in early August they'll be "popping up safe, socially distanced drive-in events at Walmart Supercenters across America." Still, they have yet to announce any more details, including if any stores in Washington will be chosen for the task. However, they will make getting concessions pretty handy! Visit their link above to learn more.