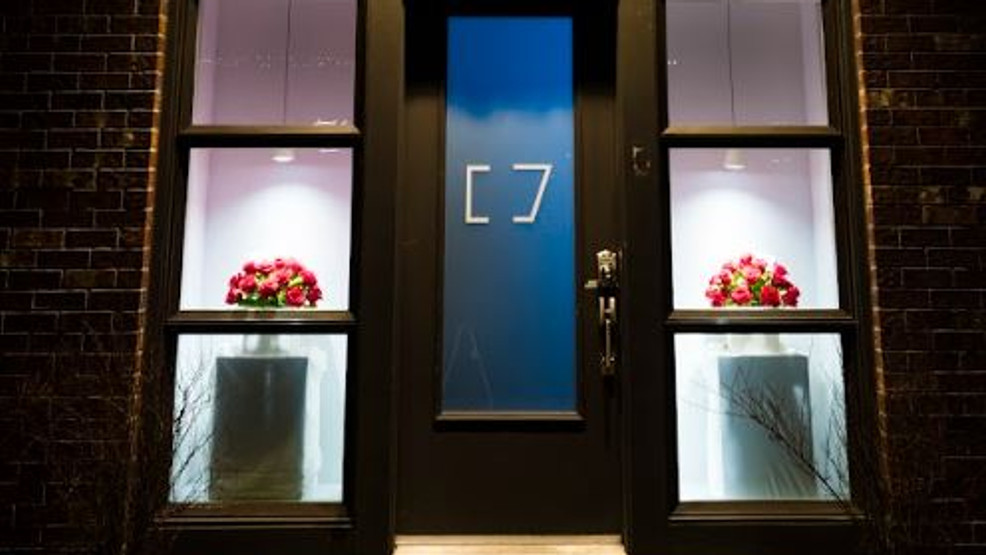 A couple of years back, I ducked into an art opening at a townhome in Ballard owned by Kascha Semonovitch and John Snavely. A few months later, I stopped back in. But this time, there was no one sipping champagne and discussing art. On my return visit, I had the whole place to myself. I got to eat, drink and sleep surrounded by the exhibition — no, I literally slept in an installation perched in the sleeping loft.

That experience really encapsulates the concept behind The Vestibule, the appropriately named art gallery created by Semonovitch and Snavely. On the one hand, their converted live/work space served as a gallery where they hosted lively gatherings while showcasing new work by artists.

But on the other, as soon as the last La Croix and canapé were consumed and guests slowly left the opening to mingle outside and discuss the show, the space became available as an Airbnb. Imagine actually living within the art itself.

Not only were Semonovitch and Snavely offering up a magical experience for art lovers, but the arrangement also allowed them to help fund ongoing exhibits from the Airbnb rental fees.

"Collectively, John and I value 'public life,'" said Semonovitch. "We feel strongly that, rather than buying art for our private home, it would be better to invest in a public space and share art with other people. Especially art that is not limited to a material, possessable object."

The Vestibule was indeed buzzy, and you would be hard-pressed to find nearby parking on the nights of their openings. Even with the uncertainty that we have all experienced over the past two years, Kascha and John knew they wanted to continue to show artists' work in North Seattle. That led them to morph Vestibule 1.0 into Vestibule 2.0.

"For the first space (Vestibule), we bought the townhome new, so we didn't have to do many physical changes, just furnishing," said Kascha. "But each installation show meant taking out all the furniture, painting, installing the work [...] and, then as soon as the show ended, I'd have 24 hours to take it all down, make it look like a more normative Airbnb and clean for guests. I'm glad not to do that anymore."

Although the new space does not have an Airbnb component, it does allow Kascha to expand the number of artists they can show and provides a larger canvas for artists' creations to take hold. Bonus: they have banana art in the bathroom.

"I was asking some artists 'what-would-you-do-with-a-gallery' questions, and more than one expressed concern that there be something exciting in the bathroom," Kascha said.

She also posed this question to her kids at dinner. Her six-year-old chimed in that there should be banana art.

"We laughed, but then we realized that there are so many jokes around banana art. And money and banana art. So we told the kids that if they made the work, they could list it for $1,000. This number blew their minds."

They have even created a Spotify playlist of banana songs that they hope to play in the bathroom during events.

Kascha, who is also a writer and poet, is ever on the lookout for artists who might be up for future collaborations. As Kascha explains, visual artists tend to gather in physical communities. For example, writers convene because there is a need to experience material things in person and to pass on craft and technical knowledge.

"I find artists by going out to see art and through other artists," Kascha said. "I go to many shows, not just at galleries but at schools and 4Culture, and keep track of what I like and what that artist does next."

Kascha has been doing a lot of studio visits in the past month. Pushed to name a couple of artists who she would like to have exhibited at Vestibule, Kascha points to potential installations by Tyna Ontko and Jia Jia in the near future. She also is taken by Michael Swaine's Futurefarmers work and would find a collaboration with him to be "amazing."

But Kascha also has an acute eye toward democratizing the process of getting into the art world and so also puts out open calls for work, as she has for an upcoming exhibit, carbon. Kascha said, "If a small gallery like us doesn't have an open call, who will?"

At some point, she would like to have an exhibit that explores the intersection of faith and art.

"Over the past few years, I've found in a number of conversations that many artists have or have had a relationship to a religious upbringing that they've escaped or even that they continue, but hide [...] or a spiritual practice that intersects with their work," Kascha said. "But in secular, super-liberal Seattle, we don't talk about religion, especially in the art world, which seems to assume secularity. Serrah Russell, Cicelia Ross-Gotta, Connor Walden, Sara Osebold and recently Daniel and May Kyton, Tiffany Daniels Elliot have all expressed this in various ways. And so many others."

There have been some great gallery spaces in Seattle over the years. Kascha points to key players who have inspired her along the way, including the True's Western Bridge, Lawrimore Project and The Alice. Although these galleries have shuttered, Kascha also gives a nod to Greg Lundgren's latest venture, the Museum of Museums on First Hill.

Vestibule 2.0 is continuing right where it left off. And although Kascha may be too modest to say it, you can definitely add Vestibule to the list of art galleries making a mark in Seattle today.

Jenise Silva is a freelance writer for Seattle Refined. Follow more of her work here.