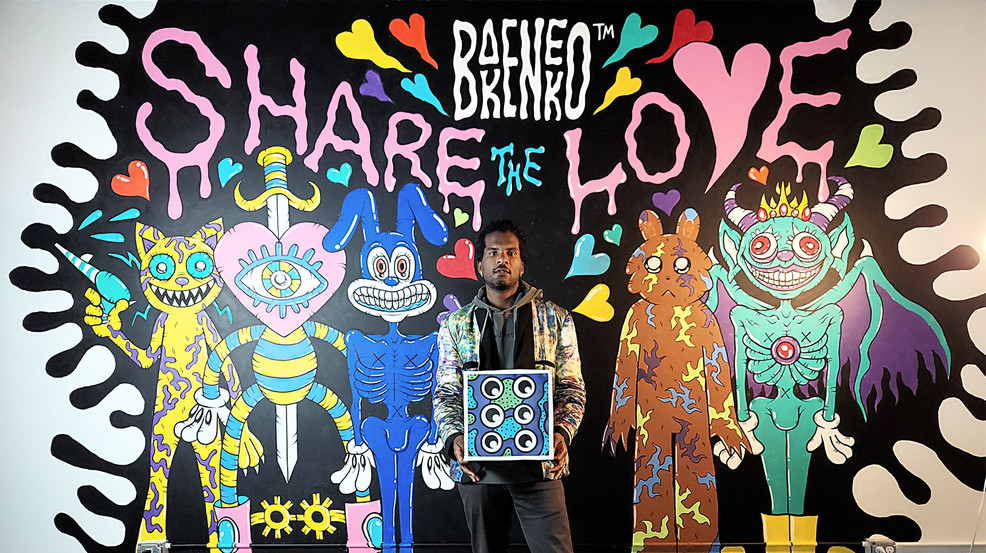 “Last year was one of the best and worst years of my life, ” says John Wesley (or Jewel Wesley, as he's known in artist circles), founder of the Seattle BIPOC Organic Food Bank. We last caught up with the self-described "creative nomad" in July, after the pandemic had derailed the Springtime 2020 opening of his gallery-community space.

The solution? Wesley pivoted last year to create a (still-thriving) food bank that would help his community. He and his business partner had been very excited to welcome the public to their brand-new space last April; then, the world came to a grinding halt. As the city rode out the pandemic, the south Seattle venue (located between the Central District and Beacon Hill) became a private gallery of sorts, with one or two people walking through at a time to perhaps purchase art. Public events obviously weren't an option.

That’s all about to change this Thursday, however, with the opening reception for Tokyo artist BAKENEKO's "Share The Love" Gallery & Pop-Up at City of Light Gallery. Guests are requested to RSVP in advance, so the team can stay mindful of numbers to ensure everyone feels comfortable with spacing.

Wesley explains that City of Light will be "centered around presenting a diverse array of voices in Seattle and around the world, especially POC.” As someone who has friends from all backgrounds, he doesn’t want to limit it to certain groups. “Art comes first,” he insists.

Yet, it is a reality that not many spaces exist where artists of color can have their work centered. "I want to promote the greatest artists on earth.” Wesley clarifies that he assesses “greatest” not only in terms of talent, but also referring to those who are involved in their community and committed to presenting uplifting and empowering messages. It matters who these artists are — in addition to what they’re creating.

He is incredibly excited about the first show featuring artist-designer Bakeneko, who he met “randomly and serendipitously” on the Internet, and was then able to meet when he came to the States just before the world shut down. Wesley has a great degree of respect for Japanese culture, which he believes arguably leads the world in design and art.

As a creator and gallerist, Wesley interprets Bakeneko's exhibit as one carrying an important message. "In a time of isolation," he says, " humanity has broken down. People have forgotten how to interact, since so much of it has been done digitally. Also, a lot of energy has been put toward protesting against hate. It’s important to critique hate. You have to create energy that you want. We have to share more love.”

He praises the artist's "fun characters," and loves that Bakeneko utilizes whatever medium can reach an audience— be it murals, sculptures, fashion, art on skate decks, dice and so on. "I love his energy and this message," says Wesley.

Bakenako also has a charming story, since he met girlfriend (a fashion designer/artist and now brand manager) Aviana DiPasquale in Hong Kong during the shutdown. Having just been introduced, the pair decided to return to Tokyo together; in a year, they created this brand.

“I love uplifting and empowering young artists... those with skill and hopeful messages," Wesley says.

In discussing the gallery name, Wesley reflects upon some lessons that came into sharper focus this past year. He admits that after the art gallery-community space stalled last April, he felt "pretty depressed for a minute." He then started the nonprofit and was finally in a groove of happiness when his dad passed away.

"While it was a very heavy year, it was also a year in which I met amazing, beautiful people." He views the importance of this balance and inevitable duality, and also believes that — as cliche as it may sound — someone has to choose to try to change the world. "I can’t control the darkening in life. But I can contribute as much light as possible.”

“It felt like in a way, we were no longer living in cities,” Wesley states about this past pandemic year. “We were in the Internet.” Yet he’s in awe of how like-minded people continue to find one another all over the world — “people who gravitate toward your energy.”

In essence, the gallery name pays homage to people who want to design and create. “It sounds like utopia,” he admits. It's a nod to people who haven’t given up on the world. “If you believe that and live life accordingly, you’re a citizen.”

Wesley is curious to see, as things open back up and distractions reemerge, whether people will remain as engaged in mutual aid and helping their neighbors as many were this past year. For him, it is not something he can simply overlook.

"Until we create said utopia," he admits, "I can’t divorce my art gallery, fashion line or whatever I create from it...I can't stop thinking about how people I know or don't know are going to eat."

Wesley reports that the food bank and its strong community of volunteers continue to evolve and operate successfully. In his mind, the next phase involves making it a long-term, sustainable organization with a full-time staff (of six or so) that isn’t dependent on Wesley's involvement. “I want to figure out how it would work without me.”

As a creative nomad, Wesley has a mission to create things — perhaps all over the world — that he can launch and then let carry on once he removes himself. “That’s proof that an idea is bigger than you.”

Life is always going to be both " hot and cold," Wesley says. And while he knows there will be despair, hurt and pain, he also strives to continuously contribute to the world as much "hope and magic and love" as possible.

We'll be watching on with awe, excited to see what he does next.