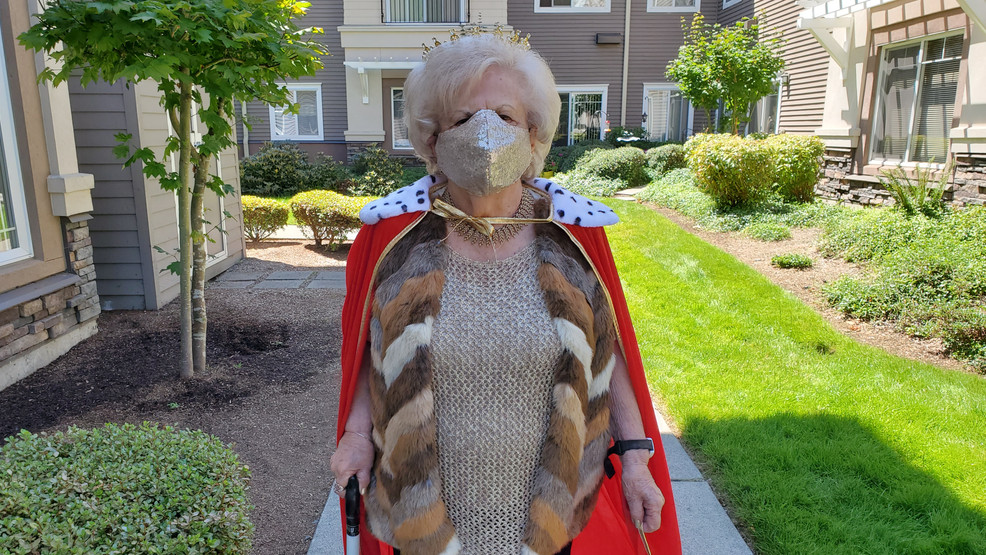 Turning 100 years old during a pandemic

Toni Underwood was staying in a house overlooking the Mediterranean Sea for her 90th birthday. She spent several weeks in Italy exploring wine country, which was a real treat because she absolutely loves her wine (red, specifically).

Five years later, for her 95th, she departed on a river cruise in France. During this trip, Underwood was honored in Normandy at the D-Day site for her service as a nurse during World War II — an experience she said "brought back memories."

And on Monday, July 13, 2020, Underwood turned 100 years old. Unlike past birthdays, this one looked a little different. Instead of jetting off to another country, she was celebrating with her daughter, grandchildren and great-grandchildren in Seattle — masks and all. I got to chat with her on the special day, and when Underwood appeared on Zoom, she was boasting a sparkly "100th Birthday" crown and sash set, champagne in hand sitting next to her daughter, Maria Murray. It was truly the epitome of "celebrating in style."

Pre-coronavirus pandemic, the plan was to host a party of more than 100 of Underwood's closest friends and family in North Bend, but with the way the world is right now, that was virtually impossible. They, unfortunately, had to cancel.

"She is the most positive person I know," said Murray. "Even with coronavirus — even with us canceling — she's just ready to always be positive and adventurous."

Turning 100 is quite the milestone, which is why her friends at Fairwinds-Redmond senior living community couldn't let it go by without celebrating. Fairwinds is home for Underwood, and on Wednesday (July 15), Underwood arrived and was "treated like a queen," where she was greeted with a red carpet, cape and tiara. Her fellow residents lined the aisle — six-feet apart, of course — cheering her on.

They spent the day celebrating the incredible life Underwood has lived — truly, the list of her accolades is mighty. In 100 years, this woman has pretty much done it all. She was born in Millbrook, New York, and is the youngest of seven siblings. After graduating from nursing school, Underwood said she immediately went into the U.S. Army Nurse Corps because her brothers were heading to fight in World War II.

"All of us had either husbands, brothers in the service," she said. "There was a feeling, I believe, of dedication — of really trying to make them as comfortable as [us nurses] possibly could, and as happy as we could, being so far away from home."

She recalled a story from being overseas during the war when she was told she needed to take a day off. She declined, but her commanding officer insisted and told her to take her friend to have some company. They went to a hotel and got a "luxurious room."

"[My friend] and I were sitting in our room talking, and suddenly somebody knocked on our door. The manager of the hotel said, 'Lieutenants, go down to the bomb shelter.' I looked at the bed across where [my friend] was and I looked at her, she looked at me, and we had been sitting there lying in bed with trays of good food, and I said 'I'm not going,' [my friend] said she's not going. So we said to the manager, 'We're staying right here.' Which we did," said Underwood.

One of Underwood's favorite things to do in this world is travel — she's been to places like Guatemala, Bali, China and Italy a handful of times, which is her favorite country to visit.

But one trip that really stands out was when she went to Africa with her grandson at, wait for it, 98 years old. She went on two safari tours there — "it was just a tremendous trip," she said.

Five years ago, Murray helped move her mom to Seattle (where she lives) from Arizona. The most beautiful part of living here for Underwood? The trees — and she's not wrong. Now, she spends her time at Fairwinds playing bridge five days a week, visiting wineries with family, walking in the backyard, spending time in the rose garden and gardening. Oh, and she also has a trainer who she typically works with three days a week on balance, strength and conditioning.

"It made me feel so good that I independently contracted with her to exercise with her three days a week," said Underwood. Seriously, what can't this woman do?

At the Fairwinds celebration Wednesday, photos of Underwood from throughout her life were on display — like the time she met actor Gary Sinise when they visited The National WWII Museum in New Orleans together. Staff planted a rose bush in her honor in the rose gardens, and there was cake (with no blowing out candles, of course).

It may not have been the celebration they originally had planned, but Underwood remained positive, one of the many traits her daughter admires.

"I think [it's] another secret for her is that she is not a complainer. She just looks on the bright side of everything," she said.

Murray said her mother believes in good people, strong women and has immense strength of character and empathy for others. When it comes to the secret of life, Underwood said, "the three things that were emphasized in our life was love of country, respect for authority and respect for self."

Oh, and one other very, very important thing.

"I have one glass of red wine every single night," she said. "And it really tastes good!"