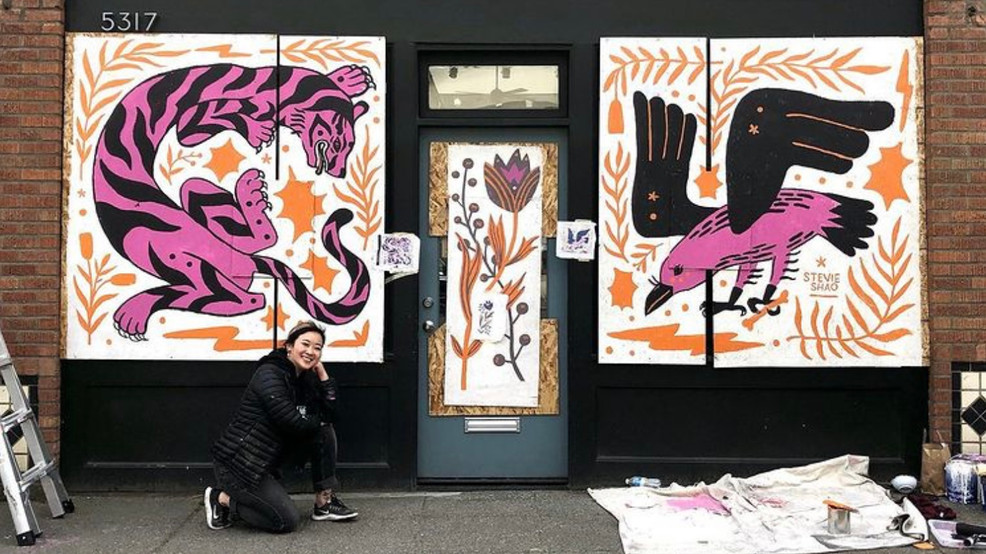 UPLIFT campaign launches only AAPI-specific artist fund in the region

When we chatted with Tia Ho, the founder of UPLIFT Artist Relief Fund, she was in the middle of a 12-week, digital giveaway series highlighting a different AANHPI artist each week. The campaign is the only pan-Asian Pacific artist fund in the region, and is an initiative to raise emergency relief for Asian and Pacific Islander creatives backed by the Wing Luke Museum and supported by KEXP, among other local nonprofits.

"We're working with artists across industries, mediums and cultures to offer donors the chance to win incredible art and experiences," Ho explains."To showcase the art and food being created at the hands of AANHPI artists at every touchpoint of the city."

Through the giveaway series, 100% of the funds raised go to the artists they've partnered with, and AANHPI artists who've apply for emergency relief in the Puget Sound Area.

"By the time UPLIFT began in April, I'd been envisioning an Artist Relief Fund and fundraising campaign for about a year," she said. "I was frustrated and disempowered by what we were all seeing in the news – the dramatic rise in xenophobic rhetoric and consequential anti-Asian violence – and even more so what we weren't seeing in the news: the astounding rate of COVID cases among Native Hawaiian and Pacific Islander communities in King County and the Puget Sound Area. "

She wanted to launch a fundraiser that would not only provide AANHPI artists with emergency relief, but also celebrate community members during a time when the focus was on traumas endured.

"I began having exploratory conversations with AANHPI artists to see if there would be interest in participating in a fundraising campaign," she said. "And there was!"

"Once I realized there was traction for the idea, I reached out to artists outside of my circle, including Kalei'okalani Matsui, founder of Polynesian dance studio Huraiti Mana. She was incredibly enthusiastic about participating and asked who my nonprofit partner was; when I told her it was Wing Luke Museum (which is the only community-based museum elevating stories of the Pan-Asian Pacific experience in the country), she told me that she was the Director of Museum Services [there]!"

From there, Matsui connected Ho with the team at WLM, and a "dream" partnership was born. Alexis Silva, the project's lead at the Wing, is an artist and curator with a BFA degree from Cornish College of the Arts.

"When I began to work at the Wing, I became enamored by not only the art the building held, but the stories," said Silva. "The stories of community, strength and resilience. As an institution, our mission is to inspire racial and social equity through vivid storytelling, and we do just that."

Despite hopes for the future, Silva acknowledges the pandemic is still very present, we are seeing a rise of Anti-Asian hate in many parts of the country, and Native Hawaiian and Pacific Islanders are being disproportionately affected by COVID-19.

"We need a campaign like this to highlight the importance of APA creatives and to celebrate the work that has come out of this amazing community."

"This is a critical time to support BIPOC communities. This is a critical time for allyship," said Ho. "The pandemic has exacerbated deep, pre-existing inequities and now we're seeing who's being left out of important healthcare conversations, which groups are dying at faster rates than others, and what can be fatal consequences of scapegoating rhetoric."

Further, she says, artists within our communities continue to feel the pressure of museum, venue and restaurant closures without much federal or state-level help.

"Artists, whether they're visual, performing or culinary, have always nourished us and now they need our support," she says. "Acknowledging the persisting realities of this pandemic – the ripple effects of which will last far longer than the pandemic itself – UPLIFT is a celebration of our communities in the face of the dual plagues of racism and COVID-19."

To get involved, Silva advises, "Follow @upliftapa and support all our amazing Featured Creatives! We hope that we can get more donors before the end of the campaign. We currently have a goal of $12,167 to help fund 20 unrestricted grants of $500. Currently we are a little over halfway at $6,182. If you are able, please donate; all funds raised go directly into artists and creatives pockets. Also, tell your friends and community! If you know of any APA creative who may need some assistance, encourage them to apply at digitalwingluke.org/uplift."

They'll reveal a new giveaway every Monday and have an all-star lineup for June. Each of the creatives are offering up rare prizes, and there are two ways to enter: by donation to the Artist Relief Fund or by Instagram sharing and filling out the form on the website.

What's next for this inspiring initiative?

"I could definitely see UPLIFT engaging in a second campaign in the future!" Ho says. "This has been an incredible campaign so far, and it's shown me that people are excited to support in creative ways!"

Hurry! UPLIFT applications run only through the end of the month (June 30).