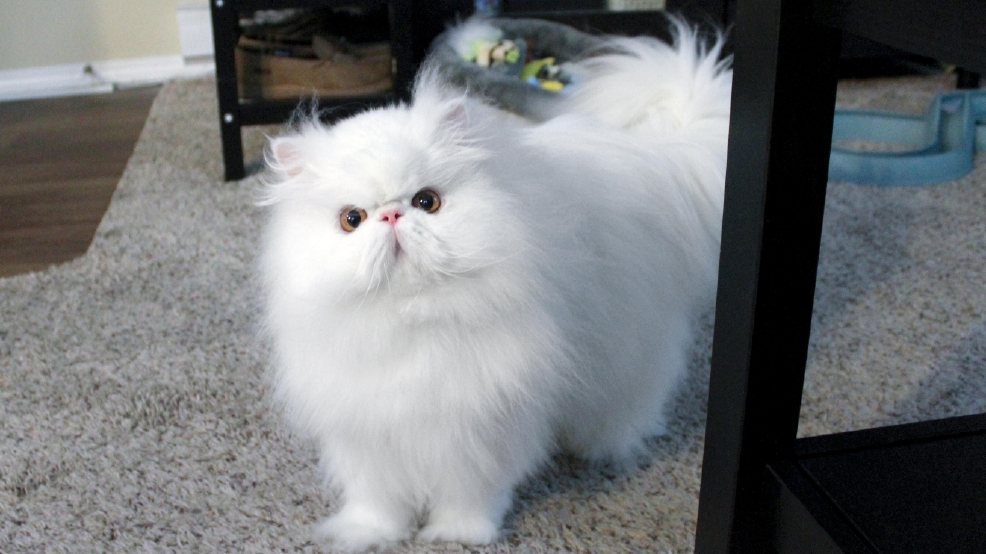 The rags-to-riches fairytail of Brimley, America&rsquo;s next cat superstar

He’s been crowned America’s Next Cat Star by Animal Planet and has the sort of rapidly growing Instagram following - nearly 32k admirers at the last count - that would make any teen jealous, but Brimley, Seattle’s latest and most pawsome luminary hasn’t succumbed to the excesses of the celebrity lifestyle.

Instead, Brimley continues to live unassumingly in Tukwila, and as long as you give him frequent belly rubs, vacuum his fur occasionally and on no account give him a bath, this handsome snowy white furball will reward you with one of his megawatt smiles.

But this isn’t just a fluff piece and Brimley’s life hasn’t always been this purrfect.

When Brimley, then named Aziz, first arrived at to the Woodinville-based Seattle Persian and Himalayan Rescue (SPHR) just before Thanksgiving in 2014, his face and fur were so encrusted with goop from an eye infection that the staff didn’t realize at first that the breeder who had previously owned him had had his eyes sewn shut to avoid the expense of eye surgery. The rescue immediately had his eyes opened but there was still a good chance that he would lose the sight of one or both eyes. But Brimley is a trooper.

"Brimley was different," Alex Perry of the Woodinville shelter recalls. "Even after everything he'd been through he was so eager to love and be loved again. Every girl at the clinic fell in love with him instantly."

Enter a knight in shining armor in the form of Washington native R.J. Lacount. R.J., a web developer, had grown up with bulldogs, but when he decided to get a pet of his own, soon realized that a dog wouldn’t fit in with his unpredictable schedule. As he was researching cats online he realized that Persian cats had similar ‘goofy’ faces to bulldogs and immediately contacted the SPHR. They suggested he see the bedraggled and stained white cat whose eyes they had just opened, with a view to being a temporary foster parent. R.J. arrived expecting to find a shy, anxious animal but instead the cat was super friendly and affectionate.

"I knew immediately that he was coming home with me."

R.J. renamed the cat Brimley after the actor and immediately began an intense regime of eye drops, oral medication, grooming, and, to Brimley’s disgust, baths to clean his stained fur, even temporarily rearranging his schedule with his employer so that he could be at home more often to attend to Brimley’s needs. The hard work paid off. Within a month the black flakes that partially covered Brimley’s eyes had fallen away and Brimley’s sight was saved, without the need for surgery.

Brimley’s route to stardom began innocuously enough when a photo R.J. posted to Reddit gained so much positive attention that he decided to open an Instagram account on Brimley’s behalf. At first it was just a way to provide friends and coworkers with Brimley updates, but soon Brimley’s followers were in the thousands and a video of Brimley being vacuumed – which he loves - went somewhat viral. A television producer commented on the video, inviting R.J. to submit Brimley to Animal Planet’s America’s Next Cat Star. After an intense weekend of filming in R.J.’s apartment, Brimley and R.J. were flown to New York City where they learned that Brimley had won the coveted title. And that was when his fame really started to skyrocket.

Though Brimley does use his Kardashian-like levels of Instagram notoriety to pass on beauty tips (R.J. gets so many questions he has had to make a video of Brimley’s grooming routine) R.J. primarily wants to use Brimley’s popularity to promote the work done by the SPHR and Seattle’s other cat rescues. If you’ve become a Brimlieber, you can follow him on Instagram or on Facebook, and find news of his personal appearances on behalf of cat rescues on his very own website. His story and loving nature even inspired Seattle Persian and Himalayan Rescue's slogan ' where unconditional love gets a second chance' and donations in his name can be made to the shelter here.

But it's not only Brimley who has benefited from the work done by the rescue. Getting to know Brimley has also been life-changing for R.J. and not just because he now wakes up every morning feeling pressured to post a new picture to satisfy Brimley’s hordes of online admirers. Brimley has brought him companionship, joy and connection to a worldwide network of cat lovers.

‘If you would’ve asked me a year ago what my life would have been like today, I wouldn’t have guessed in a million years it would be what Brimley has transformed it into.’