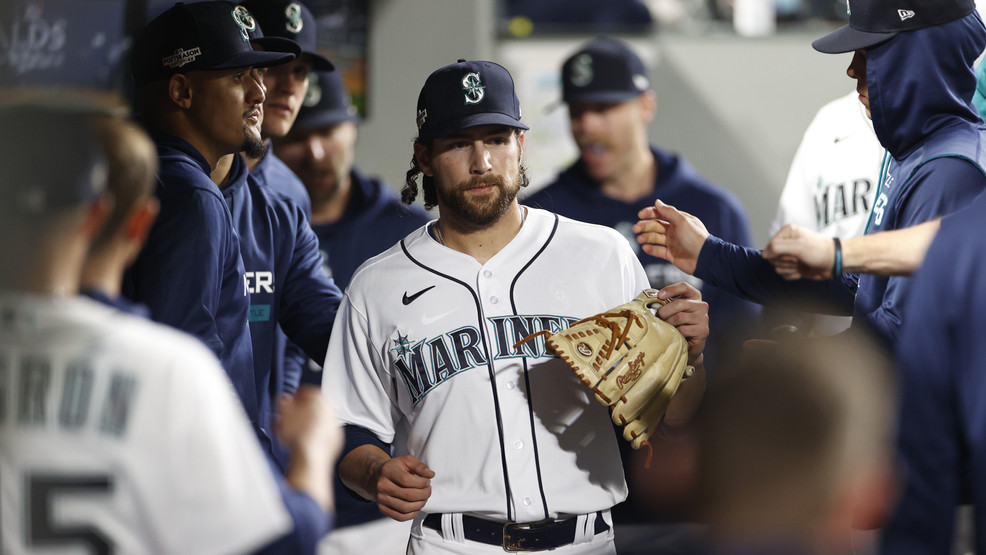 SEATTLE, WASHINGTON - OCTOBER 15: Penn Murfee #56 of the Seattle Mariners looks on after giving up a home run to Jeremy Pena #3 of the Houston Astros during the eighteenth inning in game three of the American League Division Series at T-Mobile Park on October 15, 2022 in Seattle, Washington. (Photo by Steph Chambers/Getty Images)
SEE MORE

Three hours before the game that wouldn’t end, the faithful were wandering the streets in their Mariner caps and their Julio jerseys, and the air was filled with shouts and whoops of joy. Vendors were barking and children were smiling and a thick layer of giddy anticipation blanketed the corner of Edgar and Dave, disguised for the moment as wildfire smoke.

Half an hour before the game that wouldn’t end, the concourses of T-Mobile park were jammed to the brim with eager fanatics, singing a song. “Let’s go, Mariners! Let’s Go, Mariners!” And strangers exchanged happy glances of recognition and they hugged their kids and kept tromping through the throng toward their seats. “Like old times,” they thought, and the echoes filled the park and the sheer possibility of the day brought tears to the eyes of those who had waited for the longest.

Right before the game that wouldn’t end, Michael McCready shredded the anthem with his trusty Stratocaster, jets cut through the sky and a King emerged from centerfield to crown the proceedings with a stamp of good luck.

The teenager next to me screamed and my wife was aglow and a guy nearby roared his approval and it was time to play ball.

At the top of the 1st of the game that wouldn’t end, the assembled believers hurled abuse at Jose Altuve and they jeered with disdain when he popped out to Cal Raleigh.

Young George Kirby, all kneecaps and elbows, barely old enough to shave, got ‘em one, two three, and the cheers were deafening and 48,000 fans felt happy and alive, and nobody had yet scored a run.

In the bottom of the 5th of the game that wouldn’t end, the fans were still singing and when JP Crawford singled in the nine spots and Julio strode to the plate, it felt like the rafters might not hold, and the collective will of the people was such that you got chills up your back just taking it all in. The teenager next to me shook his fist and his eyes were on fire, and my wife said, “Come on!” And a guy nearby shouted advice to the Rookie of the Year. But it was a not to be, not yet, because Julio swung mightily and missed and the inning was over, and nobody had yet scored a run.

At the bottom of the 8th of the game that wouldn’t end, that wasn’t wildfire smoke in the air anymore. No, it was voodoo. Black magic of the sort that would not allow a run to score, and it gripped the night and refused to budge. A little girl in front grew fidgety, and the kid next to me looked somehow older, and people prayed and grit their teeth and there was starting to be lingering desperation about the place. Julio crashed a double to left though, and maybe this was the time! There was stomping of feet and clapping of hands, but Ty France came up empty and it was not to be, and nobody had yet scored a run.

In the top of the 9th of the game that wouldn’t end, the hated Astros got runners to 2nd and 3rd, and young George Kirby, who’d pitched the game of his life was empty of fuel, so in came Matt Brash, he of magical stuff, and there was much gnashing of teeth and sweating of palms, and Brash embarrassed Christian Vazquez and humiliated Altuve, and there were screams of delight, but the people were tired, and they sat down to rest because the voodoo would not fade.

To extra innings it went, and the hits were rare, and the little girl in front was begging to go home and the kid next to me looked like he needed a shave and my wife was pulling her hair out and the guy nearby was still yelling but his voice was raspy and hoarse.

One after another the relievers came in and all of them threw a hundred and five and it was like the batters swung noodles and the black magic held sway. And still, Mariner faithful held their ground and stomped their aching feet and clapped their blotchy, aching hands, and still, they sang their songs with worn-out voices and the collective will would not bend.

“Maybe THIS is the inning,” they said over and over, but it never was, and nobody had yet scored a run.

Down through the 11th and the 12th it went, on and on and on, and the kid next to me had a beard now and the girl in front was slumped over in her seat, still holding a rally towel in her tiny little hand, and the guy nearby was making croaky crazy sounds because his voice was shot but his heart was not and his eyes were rolling back in his head but still he would not give in. My wife was getting rummy, giggling uncontrollably at the absurdity of it all.

The hitters flailed and the fans wailed and the concessions were out of food, and the concourse was littered with bodies on the concrete floor, loyal souls who’d gone looking for a bathroom but had lost their will to live and had collapsed on the spot, some of them mumbling incoherently, “For the love of God, somebody gets a hit!”

By the bottom of the 14th when Mitch Haniger singled to left, all of our clothes had fallen out of fashion. The kid next to me had a beard down to his belly button. Young George Kirby was in the dugout signing up for Medicare. There was a guy at the end of the row who’d been putting a shoe on his head for luck, but now he was throwing his shoes at the umpire and ripping off his clothes like he was stark raving mad. My wife’s hair had turned gray and it was dark outside now and buzzards were circling above the lights. The little girl was in a fetal position. People were attacking the hot dog stands, wolfing down packets of ketchup and mustard to sustain themselves. I saw a man eating a napkin. And still, somehow, the words rolled out into the night, slowly at first and then faster and faster, whispery and gruff, “Let’s go Mariners. Let’s go Mariners!” Even when Carlos Santana struck out they refused to leave.

In the top of the 18th, in the 6th hour of the game that wouldn’t end, a game the likes of which the postseason had never seen, a game that featured 18 pitchers, and in which the collective will of 48,000 fanatics who’d waited for this day for 21 years and who refused to give in to cynicism and doubt even now, the black magic voodoo in the air blinked, ever so slightly, and let up for just a moment.

RELATED: 'We'll be back:' Seattle Mariners end playoff run after 1-0 loss to Astros in Game 3

Penn Murfee, who’d pitched the 17th and was back out again because who else was there? threw to Jeremy Pena on the inside part of the plate and Pena lashed a drive to left-center that cleared the wall, and it was met by stunned silence. The spell had been broken. The hated Astros had scored a run.

At the bottom of the 18th of the game that wouldn’t end, the kid next to me with the long beard slowly rose to his feet. The little girl in the fetal position unfolded herself and stood. My wife, whose hair was white by now, grabbed my hand and her eyes were clear. The man with no voice pulled himself up and whispered like a child, “Let’s go Mariners” and you thought he might faint from the pain in his throat. We all joined in as best we could, and it spread through the park. It was like all of our hearts were beating in rhythm.

Jared Kelenic bounced out to first.

JP Crawford grounded out to shortstop.

And up to the plate stepped the Rookie of the Year, he of brilliant smile and dazzling abilities.

The chant changed now to a sing-songy hymn.

They’d put up even money now, with Julio at the plate.

But the voodoo in the air had regained its composure. Julio hit a liner that was caught, and the game that would not end had ended. And the season. And the summer. And the hopes and dreams of the thousands that have waited and will continue waiting as long as they must.

The hated Astros danced, the sad, young Mariners watched, and the 48,000 got up and filled the concourses and trudged away into the night, heavy of heart, tired of feet.

But walking down the steps and out into the streets, passing the Junior statue and the Edgar statue, with a saxophone echoing somewhere and people looking at one another as if to say, “What did we just witness?”, a funny thing happened.

Defiantly, ironically, happily, even, it started again, and the night air was filled with hope. With possibility. With the dreams of a baseball future.

And so it starts