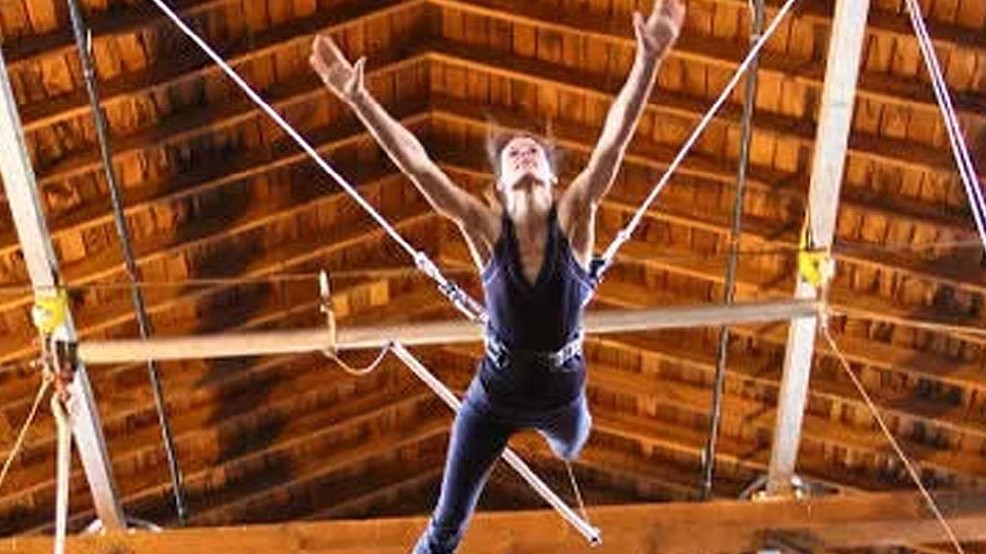 If you get the timing down, the instructors clear you to try a real catch before the end of class. (Image: Emerald City Trapeze Arts)
SEE MORE

The day I joined the circus

"He'd fly through the air with the greatest of ease, that daring young man on the flying trapeze."


Never in all my days on Earth did I think these 100-year-old song lyrics would apply to my life, but a couple of weeks ago I was doing just that: flying through the air on a flying trapeze. The "greatest of ease" part is still up for debate.


Emerald City Trapeze Arts invited me to their SODO facility to try out a flying trapeze class. I do not like heights and I am still not entirely sure what compelled me to say yes to this kind invitation, but I am SO glad I accepted. To put it bluntly, flying trapeze class is (expletive) amazing. But I didn't feel that way from the start


I arrived for the Introductory Flying class about 15 minutes early and hid in the corner while I watched the previous class finish up. I would not recommend this. Watching these people perform made me want towellbarf all over the place. They were very high in the air (heights and I are not BFFs) hanging from their knees on a swinging bar (I haven't done that move since grade school monkey bars) and were hurling their bodies towards a catcher on a second trapeze. They made it look easy, but I was 100% sure it was not nearly as simple as they were making it appear. If the front desk didn't have my name and phone number, I might have bolted for the door.


The class started with a basic rules lesson where the world's most adorable young man (I'm old so I can say things like that) taught us the basic commands we would hear when it was time to jump and how to handle ourselves on the platform. It was a pretty fast tutorial. At first this made me nervous, but this is a "learn by experience" sort of activity.


The next part of the class was some quick bar work on the ground. The instructors assured us that this is much harder to do on the ground than when you have the momentum of a swing helping you. I totally thought they were lying just to get us up on the platform, but I went with it.


The floor instruction was over in about 10 minutes and the next thing I knew I was standing at the base of a ladder wearing a belt harness being clipped into the safety mechanism that helps you get to the platform. Did I mention I don't like heights? Because I don't. Climbing the ladder to the platform was the scariest part of the entire process for me from the get go.


So, there I stood high off the ground on the platform. Did I mention the first step in the actual trapeze process is to lean all your body weight forward off the platform while the instructor holds your harness? Because it is. You have to lean out as far as you can to grab the bar with first your right hand, then your left. Yep. Just hanging there off the edge of a platform, staring at the net and ground below.


Next thing I knew I heard the jumping command being yelled from the ground and off I leapt. I straight up leapt off a platform and was swinging through the air. My heart was beyond racing, but the nerves kept me focused on the task at hand. Because you don't just hang there by your hands swinging back and forth. Nope. On your first jump you go through the entire process of getting your legs up and over the bar, hanging from your knees, and releasing your hands to reach for the imaginary catcher. They aren't messing around here, people.


And guess what? I did it. I did the whole thing. And they weren't lying. It was much easier to hoist myself around the bar while the trapeze was swinging. It wasn't graceful and it wasn't pretty, but I did it. And once I jumped off the platform, I was no longer scared. Why? Because as I was swinging I was so focused on listening for commands and doing the motions that I had no extra brain capacity for fear. Also, as I was moving around I was no longer aware of how far off the ground I was. Everything outside my body and the bar was a blur. I could have been 2 feet off the ground or 200 feet and I never would have known.


Everyone in the class got several attempts to get the pattern and timing down. Trapeze is all about the timing. One I got the timing down to their satisfaction, they rang a cowbell and I was cleared to try to work with the catcher. Everyone in our class was cleared, so it is not an unachievable goal. For the last 20-30 minutes of the class we worked with the catcher. This means putting everything I learned together and literally hurling myself through the air when I was told.


And again, I did it. I did what they told me when they told me and I made the catch. I mean, I guess the catcher had a little something to do with it, but I like to think I followed direction well. Everyone in our class made the catch at some point during the class, so again it isn't an unreachable goal for a first timer.


I have to say I was riding the adrenaline rush from this class for a solid 24 hours. I was also rocking a solid bruise on the back of my knee and my hamstrings were quite sore, but none of that mattered because I had just done a catch on a flying trapeze. It was empowering.


As adults we rarely take the time to attempt physical challenges. Gone are the days of trying to jump down the steps from the highest point possible or dismount the school yard swing at the peak swing. I can't remember the last time I tried the monkey bars or played hot lava on the living room furniture. Flying trapeze class is a great way to tap into that lost physical play and have a little fun again.


Emerald City Trapeze Arts has beginner classes every day of the week for $60. There are punch card options as well as summer camps for the kids. If trapeze isn't your thing, they also offer aerial work, acrobatics courses, trampoline classes, and even pole dancing classes if you are feeling risqué.