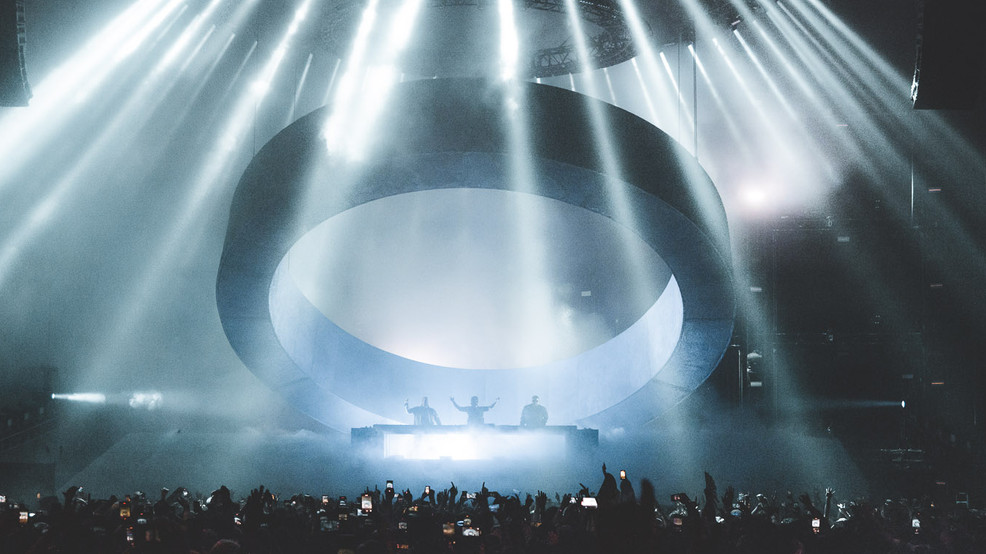 Wednesday night was no average night at Climate Pledge Arena.

It was a rave — not a concert — as Swedish House Mafia kindly reminded the crowd midway through their 90-minute set. Swedish House Mafia is an electronic dance music (EDM) supergroup made up of Swedish producers Axwell, Steve Angello and Sebastian Ingrosso. They brought their "Paradise Again World Tour" to Seattle Wednesday night, the trio's first time performing in Seattle, marking an exciting milestone for an act that has been around since the late 2000s.

That wasn't the only milestone Seattle got to celebrate with Swedish House Mafia — Sept. 14, 2022, was also the 10th anniversary of the release of their 2012 global smash hit, "Don't You Worry Child."

If you were within a five-mile radius of the Seattle Center Wednesday night, it would be shocking if you didn't hear Swedish House Mafia perform what I truly believe is the best sets I've ever witnessed. They made Climate Pledge Arena feel like a nightclub in Ibiza at 4 a.m. The crowd was kept on their toes for the entire 90 minutes with out-of-this-world production, constant drops that you just had to keep dancing to and nostalgia that brought us all back to the EDM boom of the early 2010s.

They came to Seattle and showed us exactly why they are known as some of the best in the business.

"You guys don't give a s--t about Thursday because you're going crazy on a Wednesday, and that's why [...] we love you," Axwell said to the crowd.

Swedish House Mafia started performing together in 2008, producing hits like the aforementioned "Don't You Worry Child," as well as "One (Your Name)," "Calling (Lose My Mind)" and "Save the World" — to think about the rise of EDM and not mention Swedish House Mafia would be a crime. They headlined major festivals like Ultra Music Festival in Miami, were the first DJ act to headline (and sell out) Madison Square Garden, skyrocketed on the music charts and achieved international success.

The epitome of legends — true masters of their craft.

In 2012, they announced they were going their separate ways, embarking on one last tour in 2013 and reuniting to close Ultra in 2018. But they shocked the world in 2021 when they announced an official reunion, cementing it with their first debut full-length studio album "Paradise Again" and a world tour of the same name.

"Paradise Again" features 17 songs showcasing an edgier, more melodic sound from the trio than the euphoric dance club beats of their past. The album included their hit collab "Moth to a Flame" with The Weeknd, which they performed together when they co-headlined both Coachella weekends in April.

The moment I saw the press release for Swedish House Mafia's tour come through my inbox, I knew I had to go. It's not every day you get to be in the same room as three influential producers like Axwell, Angello and Ingrosso, listening to music that helped shape who you are. I listen to EDM every day, I go to shows at least once a month — it has easily been one of the most important parts of my life for the past decade.

While the scope of the genres I listen to and the artists I know has grown tenfold since then, it was just three acts that introduced me to this world: Skrillex, Avicii and Swedish House Mafia.

The energy in the arena last night, from the first opener to the last blast of fireworks, was exhilarating. It was four hours of pure bliss. House producer DJ Holographic started the night off strong with her set establishing the tone of the high-energy evening to follow. The night shifted to a heavier set from producer Zhu, with the intensity of the performance juxtaposed by his soft, haunting vocals. Zhu was joined on stage by a live band featuring epic drums, melodic saxophone and electric guitar. This was next level. It hardly felt like an opening set.

And then Swedish House Mafia graced the stage with the most dramatic grand entrance of all time. They were completely concealed from the crowd by a long, black curtain that fell to the floor upon the first drop. The trio was surrounded by a giant LED circle floating above, resembling something of a UFO, with smoke cascading down the stage. The production of this show was unlike anything I have ever seen. You never knew what was coming next: lasers, fireworks, blasting fire, smoke and flashing lights — all synced perfectly with the music. And that music was nonstop, drop after drop after drop.

They gave the crowd no reprieve for the entire 90 minutes — and the crowd certainly didn't seem to care.

There was not one person in that arena — floor or seats — not dancing. It was full of people spanning generations, just like the group we were all there to see. The music was a perfect balance of their new discography and the music that made us fall in love with them more than a decade ago. It was clearly evident just how happy Axwell, Angello and Ingrosso were to be back on stage together, performing for us, and that energy was given right back to them — creating one of the most incredible atmospheres I've ever experienced.

Was last night so special because of the energy? The production? The talent? All of the above. But if I had to credit it to one thing alone, it would be that last night brought me back to 2012 when I first started listening to EDM, and I was reminded why I fell in love with it in the first place.

Swedish House Mafia gave that to me a decade ago, and they gave me that again last night.

When I picked up my ticket at Will Call before the show, I overheard two people talking about how the only song they knew of Swedish House Mafia's was "Don't You Worry Child." I told them even if that is the only song they know, they'd still have a good time, because they are just that good. I had no way of knowing if that was true or not since it was my first time seeing them live myself, but I just had a feeling in my gut.

And I was right.