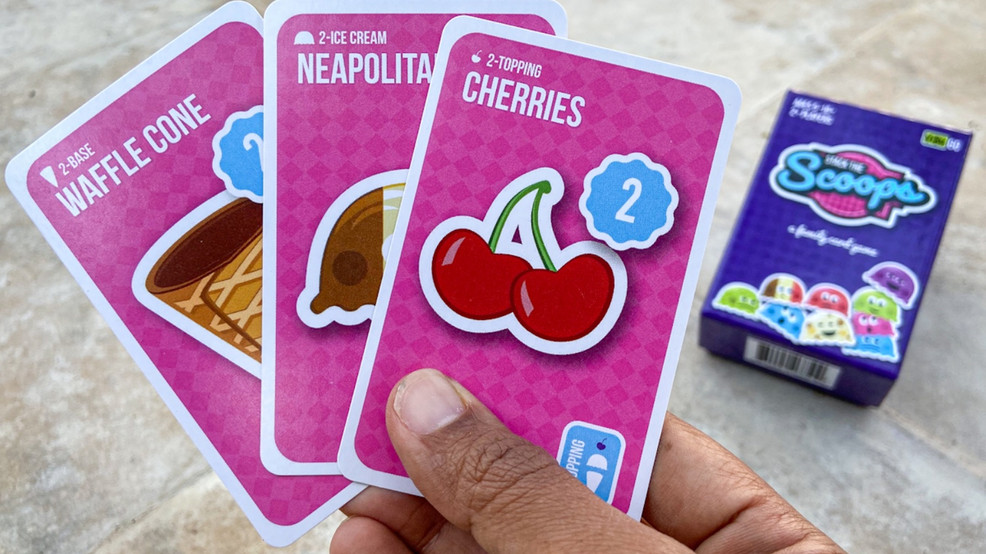 In the time of social distancing, people got creative with their time spent at home. Some picked up a new hobby while others tried out a new fitness routine. While you were experimenting with sourdough bread recipes, one local couple and their kids were busy creating the ice cream-themed card game now known as Stack the Scoops.

Intrigued by how one family could create their own game in a matter of months, I couldn't wait to speak to them.

In April 2020, married couple Astrid Vinje and Clint Bush and their children were in Vietnam when COVID became a global pandemic. While quarantined, the family would play games to pass the time. During one card game between Clint and his 9-year-old daughter, the two began to imagine what they would do if they were able to make their own game. They began to brainstorm putting ideas together. Clint asked his daughter what she thought the theme should be, and she was pretty keen on the idea of building a game around ice cream. When Astrid walked into the room, the two pitched their idea and she was immediately on board.

For most families, this type of scenario would just be one of whimsy, but with Clint's background in graphic design and Astrid's project administration background, the two knew they could make it happen.

Literally the Next Day

Clint remembers that it was the very next day when he cut up some computer paper into card-sized pieces and the four of them sat around the table drawing and writing down their ideas. By the end of the day, they had 120 rudimentary-made cards which served as their first prototype. The next several days, the family would play this new game that they made while taking notes on how to improve it. A few days later, Clint began designing the cards on his computer. Then the family contacted other families and sent them the image files so that they could test out the card game.

While away from home, Astrid and Clint were even able to meet with lawyers and create an LLC, but they had to wait until they got home to print the actual components of the game. However, by July, they sold their first pack of cards using the branding name ViBuGo – a combination of the couple's last names. The whole process was done incredibly fast, and I'm amazed by the time frame; but Astrid and Clint act like it was no big deal.

Stacking Those Scoops and Filling the Void

Created for kids ages 5+, Stack the Scoops is easy to play for young ones but entertaining enough for parents to join in. The idea of the game is to "build" ice cream desserts with three main components: a base, a flavor of ice cream and a topping, each with its own point value. Players of two or more take turns placing cards on the table trying to complete these sets. When they do, they "stack" the cards and add up the total points.

For now, ViBuGo is just a side gig, but Astrid and Clint are able to see the big picture ahead. There is a need for more games for families like their own.

"There are some games geared toward a younger audience that are dreadfully boring," says Clint. "The majority of games that are for those age 12 and over are incredibly complex. So, there's a huge gap in the middle there."

The games that the couple has found on the market that serve their sweet spot often miss the mark, too.

"There’s educational games, which can also be dreadfully boring because of the heavy emphasis on the education aspect of it," says Clint. "A game shouldn't have such an educational spin on it that you feel like you are doing work."

As for other games the couple has found on the market, he laments, "There’s got to be [games] that are fun to play, but don't resort to silly or potty humor. I have a lot of ideas for new games – a couple that we're working on. Ultimately, I would love to help other people publish their own games because there are so many ideas out there."

Creating Their Own Adventure

Making Stack the Scoops has been a good adventure not only for the family, but for their communication as a couple, as well. They tell me that, until recently, there haven't been a lot of entrepreneurs in their family. But unlike Candyland, it hasn't been all lollipops and roses, either.

She says that she is "a little nerdy" when it comes to project management but putting up a few project boards around the house has helped the family keep their thoughts together. As a family, they play a lot more games. But they play them differently. They dissect every element of the game, taking it all in.

"I think that the biggest challenge for us was getting the word out. Because we created [the game] during the pandemic, we missed out on having that marketing push," says Astrid. "Ideally, we would be going to conferences and meeting people and going to stores and talking to them – doing these in-person events to get as many eyes on the game as possible. So now, we're kind of playing catch up."

Many families are just now hearing about Stack the Scoops, but it is already an award winner. It won the 2021 Creative Child Award for "Game of the Year" for family card games.

"At the moment, [ViBuGo] is still a side business for us, but I think that there is a lot of potential to grow."

Jeff Totey is an entertainment expert and freelance writer for Seattle Refined. Follow more of his work here.