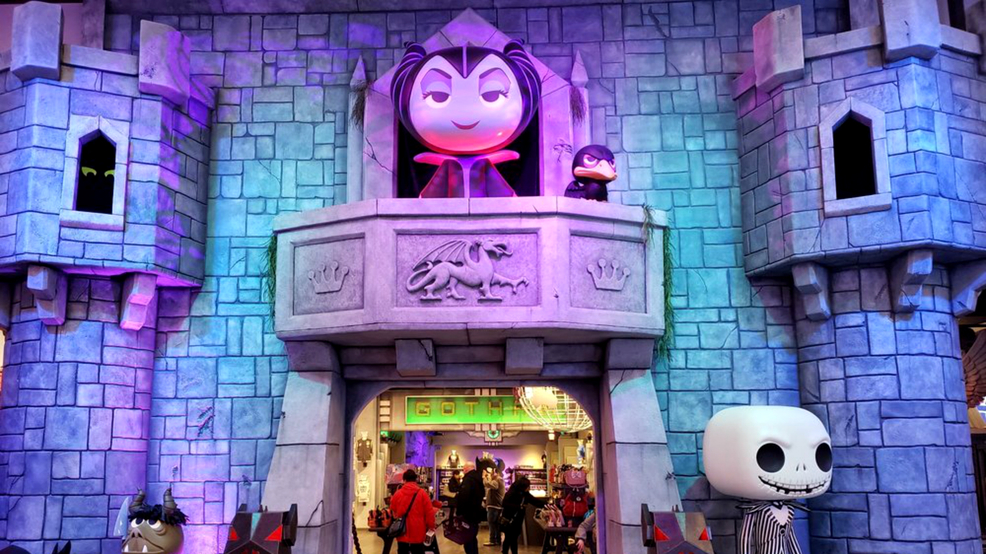 Just like the giant bobbleheads that adorn its headquarters in Downtown, Everett, Funko is a big deal. (Image courtesy of Warren G / https://bit.ly/2CyxFLk).
SEE MORE

7 of the Best Places in Everett You've Never Heard Of

For some, Everett is just a city you pass by on your way to the tulip fields up north. Outside of Boeing and the Angel of the Winds Event Center, many are unaware of the treasures that can be found here. As with many other cities, downtown Everett was THE place to go if you wanted to see a movie or make a day of shopping before the local malls moved in. As the stores and theaters moved out, so did the town’s charms. However, today Everett is seeing a new revelation of sorts with new shops, restaurants and entertainment venues to choose from. Here are just seven of the best places in town you didn’t even know existed.

Just like the giant bobbleheads that adorn its headquarters in Downtown, Everett, Funko is a big deal. So big in fact, the toy company has just made a deal with the field where town’s minor league baseball team, Aquasox play to Funko Field. Though Funko has been a part of Everett since 2005, many of the town’s residents were unaware of this before their move into the former Bon Marche (Macy’s) building in 2017. The building’s first floor serves as the company’s flagship retail store which houses something for everyone. The 17,000-square foot shop features separate sections of figurines, t-shirts, pencil toppers and more for a large variety of TV and movie characters and pop culture icons.

A larger-than-life Godzilla towers over a world of older Hanna-Barbara cartoons current anime characters in one section. Next door, shoppers can slide into a life-sized Batmobile for a selfie with a Batman ’66 while Robin and Batgirl look on. On the other side of the store, a life-sized albeit cartoonized Stan Lee is selling Marvel comic books while The Hulk crashes through the building. Other sections include spaces dedicated to Star Wars, Harry Potter, Disney, the company’s original Wetmore Forest creatures (named for Wetmore Avenue where the headquarters is located) and a “build your own” Funko creation station.

There was a time when nobody even knew what an escape room was. Now, you can find them just about everywhere including Everett. But Escape Scene has something that none of the others do: a real sarcophagus prop from Universal Studios Mummy films (think Brendan Frazier, not the recent Tom Cruise flop) which is just one of the reasons to visit here.

In case you are one of the few, an escape room is a game where a group of people are “locked” into a room and left with only their wits to get out before the timer runs out. While this might sound like a claustrophobic’s nightmare, the rooms are surprisingly “roomy,” you are never really locked in and you never have to play the role-playing game with strangers. Escape Scene features three rooms that are all connected by one evil, time-traveling mastermind, Alastor Havoc. Guests serve as members of a space-time investigation agency who “travel” in time to Deadwood in 1876, Cairo in 1930 or Munich in 1945.

In 2017, the Imagine Children’s Museum received an accreditation from the American Alliance of Museums - which might not sound all that important except when you consider that out of the 33,000 or so museums in the United States only about 1,000 of them are accredited, and of those only 20 of them are devoted to children.

The museum serves kids ages 1-12 with three floors of interactive fun that promotes academic learning, critical thinking, social awareness, self-confidence and a really good time. The museum features an amazing list of exhibits including an Art Studio, a Construction Studio, an Imagine-Air and Ball Tower, the Air-Mazing Laboratory, the Tall Timbers Rooftop Adventure (which is a playground on the building’s roof!), an indoor tree house, the Little Science Lab and the Imagine Water Works among other play areas. If only that had this place when we were kids! Admission is $12 per person (adults and children), $6 per person (from 3:00-5:00 p.m.), $3 per person (EBT Card Holders) and free for children age 12 months and under). There is also a free admission on the third Friday of each month from 5:30 – 9:00 p.m.

One of the best theaters presenting the best plays and musicals in the Northwest is Village Theater in Issaquah, but did you know that the Everett Performing Arts Center is the theater's second home? Each new production is first shown down south before heading up to Everett for the show’s second round of shows in a theatre that just might have an edge of the company’s original.

The center is beautiful, the acoustics sound great, the chairs are comfortable and rows are shorter making getting in and out a lot easier too. But what really matters is the performance and Village Theater always presents a good show. Each season, Village Theater presents a variety of five shows featuring classic productions, new works, musicals, dramas family productions and some that are not so much. The Everett Performing Arts Center is also home to special KidStage productions and classes.

“We promise to serve you in a way that is hospitable, friendly, non-judgmental, and encouraging. We promise to make your drink to the best of our abilities. And to make coffee fun again. We're definitely into that,” states Narrative Coffee Co. on their website. And it’s true. The espresso there is remarkably different from your local barista stand or dare we say the mermaid-logo coffee company in town?

Narrative serves beverages made from coffee beans from around the world and roasted locally in Snohomish County and served in a 1921 building that is warm and inviting with natural wood and brick walls. Sure, your order might take a little longer than you’re used to, but it is so worth it. The coffee shop also offers breakfast and lunch items including incredible breakfast sandwiches, soups, salads and delicious yogurts topped with fruit. Unfortunately, the menu is seasonal, so you won’t find what they are serving up on their website. Don’t let this deter you though as this is definitely a stop worth making on your next trip up north.

Located near Boeing, High Trek Adventures and Ziplines is pretty awesome in that the place offers over 60 obstacles to triumph over and three zip lines that total 560 feet high in the air. But worry not, they also use a smart belay safety system to keep you safe while you’re freaking out. High Trek is great for families of all ages. Kids as young as four can try out the Cadet’s Course which features 10 different challenges 15 feet above ground.

Anyone age seven and up can try out the rest which takes about an hour and a half to complete including the zip tours. For those afraid of missing out (but not so much that they want to actually climb aboard) might enjoy a round of 18-hole miniature golf just a few feet away from the monkeys in the sky. Tours can be scheduled day or night (even in the dark) on most days and while walk-ins are welcomed, if it is better to schedule your adventure online instead. High Trek tends to operate by “reservations mostly” outside of our region’s nicer weather.

The original Grand Leader Mercantile store opened in 1904. It was open until 1913 when it moved further up on Colby Ave. Many years later, the spot reopened as its original namesake last fall and just like the old shops of yesteryear, you can find everything here. New and used, modern and vintage, do-it-yourself and we-did-it-for-you everything. Gifts, lotions, garden gear, clothing, furniture. Lots of great stuff in every price range.

The Grand Leader isn’t a thrift store nor does it smell funny inside. It’s a beautiful space with chandeliers of every size and shape hanging from the ceiling. Surprises are found behind every corner. You’ll find some things that will remind you of your childhood, things you didn’t know even existed and perhaps a few things that you can’t live without.