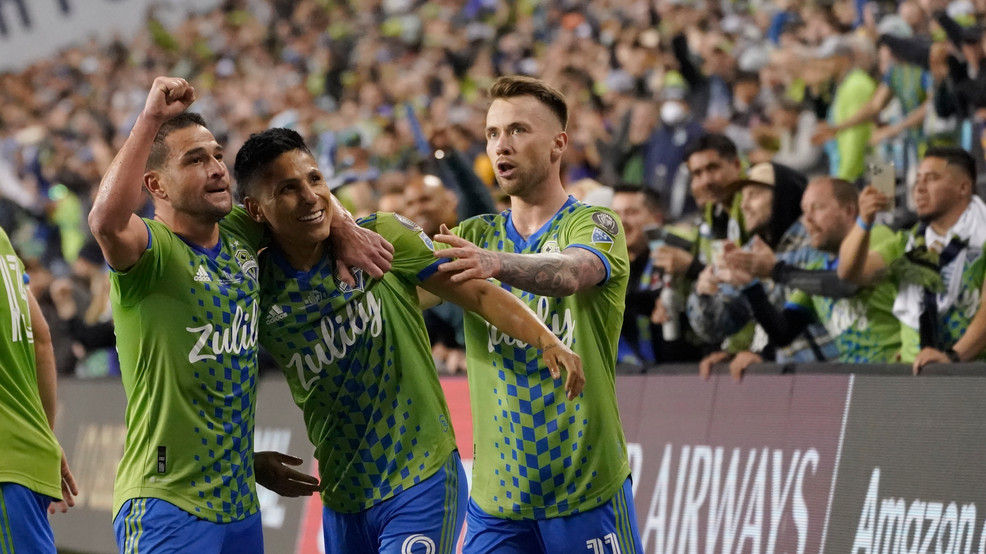 Seattle Sounders forward Raul Ruidiaz (9) celebrates his goal with teammates during the second half of the second leg of the CONCACAF Champions League soccer final against Mexico's Pumas on May 4, 2022. (AP Photo/Ted S. Warren)
SEE MORE

SEATTLE — Move over, Marshawn Lynch. Seattle sports fans have recorded seismic activity similar to Lynch's 'beastquake' run with the Seahawks against the New Orleans Saints in a January 2011 playoff game.

A record-breaking 68,741 fans packed Lumen Field Wednesday night as they watched the Seattle Sounders beat the Mexico City-based Pumas of Liga MX 3-0 in the CONCACAF Champions League final. With the victory, the Sounders not only became the first MLS team to ever win the Champions League, they also automatically qualified for the 2022 FIFA Club World Cup in Qatar.

According to the Pacific Northwest Seismic Network (PNSN), which monitors earthquakes and volcanoes in Washington state and Oregon, Sounders fans created three 'ravequakes' after each of the club's three goals. PNSN tweeted photos of seismographs that show the ground around Lumen Field shook during the celebrations.

In responses on Twitter, PNSN said the shaking was about five times the background level.

"So think of shaking from every day activity like cars driving and machines humming, and it was 5x that!" PNSN tweeted.

PNSN also responded to a user who asked if the shaking registered on the Richter scale.

"Giving a magnitude for this shaking is a bit complicated, since it isn't a textbook 'earthquake,' so no simple or correct answer for that one," the response stated. "(With regard to) Beastquake, they are similar. Both were created by the stadium full of fans and are incredible demonstrations of support and joy!"