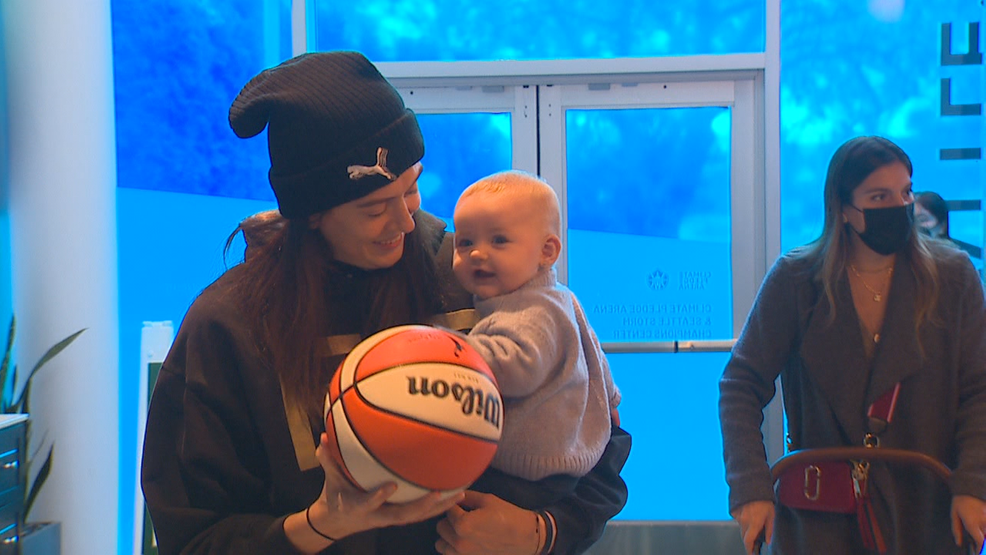 Best Basketball player in the world?

Or best mom in the world?

It could be that simple for Breanna Stewart, the player for the Seattle Storm who became a mother last August when baby daughter Ruby Sue arrived.

With the Storm set to open its season at Climate Pledge Arena on May 6 against Minnesota, it marks the first time she’s preparing for a new season as a working mother.

"You can do both, you know," she said. "I can be a high-level professional basketball player and be a mom. We have our own special super power that's for sure."

Of course, given Ruby’s arrival last August, it won’t be Stewart’s first game as a mom. That occurred during the 2021 season with moments any new parent can relate to.

“It was a juggling act for sure," Stewart said. "Thank goodness for Marta for being there and holding it down really while I was playing. We were just trying to figure it out, we were in Everett, I have to get game ready, Ruby has to get ready. It's a process and as parents, as you know, you plan on getting somewhere on time and you never get there on time.“

Every parent out there is thinking to themselves how much they can relate.

Still, Stewart has been a staunch supporter of change on a number of important issues on and off the court.

She sees the inspiration that she and wife Marta can provide to anyone who wants to be a parent.

Knowing that she can use her platform as a professional athlete to help so many.

"There's not a right or wrong way to doing anything To starting a family, to having a family to figuring how to make everything work. Marta and I are just rolling with it and just to be the best we can” Breanna said.

"I wanna be my best because I know that I have so much potential in where I can go on and off the court. But really wanting to be my best for Ruby and the next generation and the younger generation to make sure we're continuing to set the bar and raise the standard"

The reality is that everything Breanna does — every basket, every dribble, every cause for change she lends a hand to means so much more now.

It’s about building a better world for Ruby and the future of WNBA stars. With a wonderful reminder every single day of why she’s pushing herself to new heights as a leader on and off the floor.

"It just puts everything in perspective. She's happy to wake up and see Marta and myself and obviously Stew our dog. It just makes me think that no matter what's going to happen during the day, good-bad-win-lose, Ruby's gonna be still smiling."

Life put in perspective for the best baller in the world by taking care of the life of her 8-month old baby girl.