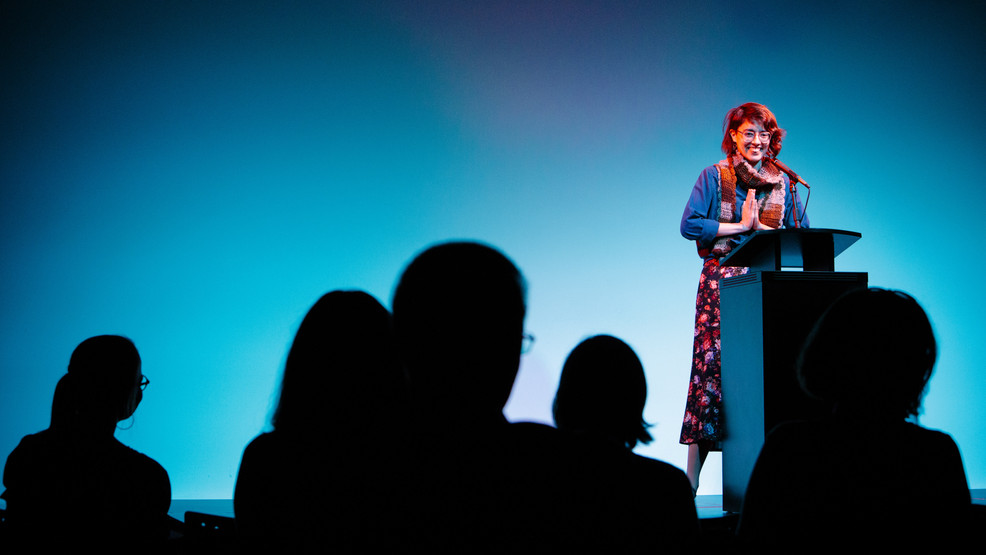 Local poet Arianne (pronounced "airy-anne") True was recently announced as Seattle Rep's first Native Artist-in-Residence, a move that just begins what the Rep hopes will be a new era of highlighting Native voices and educating audiences and staff alike through art, discussion and community engagement.

True started in Seattle's youth slam scene during high school; a few years back, moving more toward poetry on the page through an MFA at the Institute of American Indian Arts.

“I've also studied dance and film, worked some in theater, and I love comics and animation, so I'm always excited about those,” she said. “In all of them, though, I get most excited about avant-garde forms, or art that's aware of and/or pushing its genre.”

As for being the first Native artist-in-residence, True says she's excited.

“I get to help folks get pumped about a new program and the possibilities it holds, and be part of it as it gets off the ground,” she said. It's also exhilarating for her to be here during the program's first year, helping things settle in as everything is done for the first time. “It feels a little like I get to be the first person to live in a new house and make sure all the pipes are working right and the heater comes on in winter.”

True has complicated feelings around connecting with her Native heritage and culture, and how this has evolved.

“That's a tricky question for me, and can be for a lot of folks because America's colonial period isn't just the 1700s; it's right now," she said. "When I was a kid my mom raised us with pretty traditional values and we learned our language and were always in Native community, but due to a lot of the same patterns of state and gender violence that have been going on for a long time now, we were forcibly separated from her and made to live with someone who tried to stamp out anything that made us Native.”

Aside from what she could “sneak,” True had to wait until turning eighteen to start connecting again with that heritage and family. How that looks has changed over the years.

“All this shows up a lot in my work, and it's hard stuff to carry,” she said. “Because of the way I was raised as a kid, though, my culture and my family feel like the dominant shaping force in my worldview, and that's been a lifeline, a strength, and a comfort no matter what else has been going on.”

True’s residency at Seattle Rep has three main components: finishing her manuscript, adapting it to an installation and hosting a series of public workshops. She’ll spend the fall finishing the manuscript, called "exhibits", and in winter and early spring she’ll work on turning it into a museum-style installation event at the Rep.

“The installation itself will be in the spring, mostly likely in April, and I'm so excited for that,” said True. “The book itself is as much as museum as is textually possible, and is both guiding a reader and demanding the reader interact back, so turning the book into a physical space people can walk around has always been part of the dream. That'll be open to the public and I hope you'll come check it out! And I'll also be running two workshops and a panel event on experimental art (the workshops will be focused on both reading and making experimental writing specifically), and those are also open to the public with no experience required, like really all you need is curiosity and the time/attention.”

The residency application involved questions around important parts of the program — and an offer to talk with a Rep staff member if needed.

“My personal process was a little hectic because I heard of the program with, I think less than a week to go until the deadline,” True said, “but as soon as I saw it, it lit up for me.”

True has wanted to make the book museum a physical installation since this project began — and she’s gotten to do that in smaller pieces through things like "yehaw" at King Street Station a couple years ago.

“Yet doing the whole book is an ambitious, expensive and logistically bold thing to do,” she said. “Plus it's pretty experimental weird art ... so this chance at the Rep felt so important because it seemed like exactly the space exhibits could go 3D in, letting the full vision come out and with the support I need to make something like this happen, and with an institution I'm excited to collaborate with.”

This will also provide financial support for True to finally finish writing the book.

“I have a lot of chronic illness and disability, so the amount of hours I can work is pretty limited,” she said. “And since we mostly lack societal safety nets, I often have to put all those work hours towards paid work, and have few or none leftover for my own art. So the financial support will let me spend a lot of my work hours making art, and that's a huge deal too.”

True hopes she can help more people feel like experimental and avant-garde art is for them.

“I think we're taught to see it as only for the elite, something an everyday person can't understand,” she said. “I think it's actually the opposite; I think experimental work is for the people and is secretly pretty accessible when you stop thinking it isn't. So I hope that through the public workshops and panel, and through the installation event itself, I can help some folks claim and connect with weirder art and feel empowered to interact with (or make!) more experimental art themselves.”