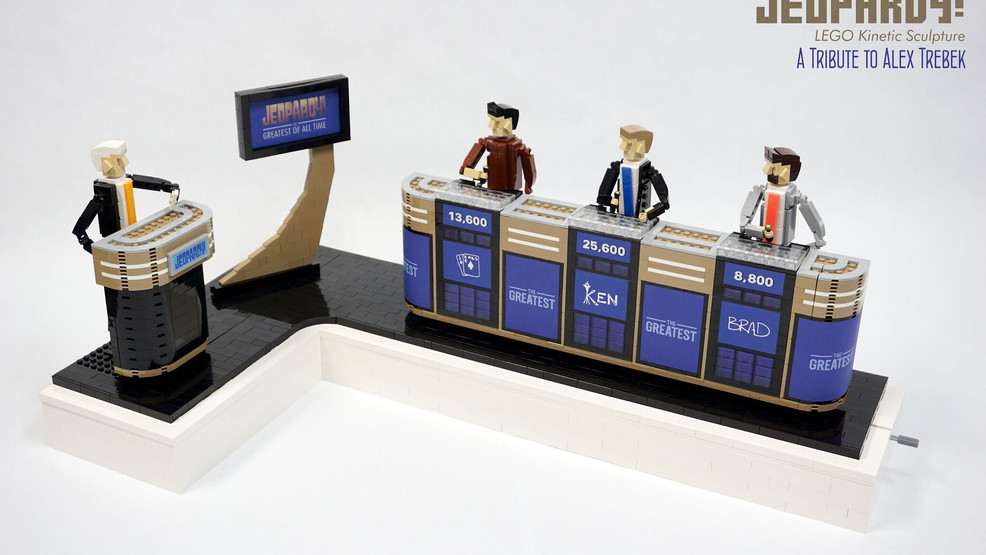 Seattle's Doug Hughes spent about two months building a kinetic LEGO sculpture of the "Jeopardy! The Greatest of All Time" tournament, in honor of the late, great Alex Trebek.

"I'm an avid LEGO builder, and I had an idea to do a tribute right away, something small similar to a quick build I did for Sean Connery," he said.

Hughes has been building LEGO MOCs (my own creations) for years. Inspired after talking with the LEGO blog, bricknerd.com, about LEGO builds incorporating motion, the Trebek build came to fruition. Hughes and his wife, Jess, have been watching the game show together since 2010, though Jess watched it with her family growing up, as well.

"With the loss of Alex Trebek late in 2020, I felt the need to do something meaningful as a tribute to the man and his legacy of knowledge, service and entertainment," Doug said in the blog post, which has a detailed timeline of the build. "My wife and I watch 'Jeopardy!' every day, so the entire show, and especially Alex, have become fixtures in our lives."

Jess tweeted about her husband's "Jeopardy!" build, tagging the GOAT tournament contestants, including Ken Jennings — who is also from the area (we got to chat with him earlier this year). Jennings himself even quote tweeted the post and said, "LEGOAT!"

You can see more of Doug's LEGO builds in the gallery above.