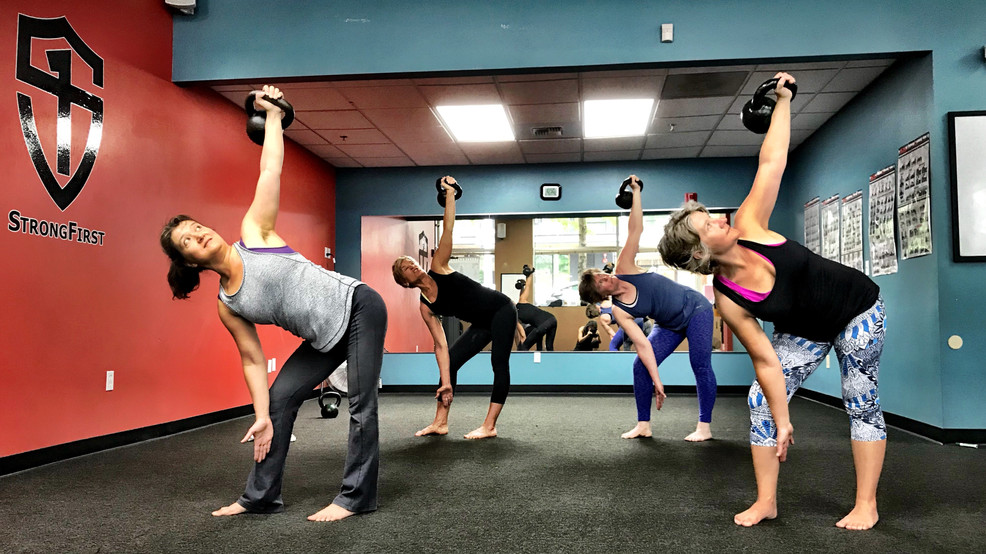 Opening the door, I was greeted by a rowdy rendition of Happy Birthday by a group on the fitness floor, led by a spirited U-shi Chang, huddled around a phone. This literal song and dance was not for me, but they were making a video for one of their coaches, I later found out. This particular member was an ex-fire chief that resisted instruction at first, U-shi Chang explained with a chuckle, but once she became coachable, she dominated. So much so that she now teaches classes and takes no BS from anybody! I should know, I took said instructor's class later that week. That story is just one of the many examples of the supportive family atmosphere at Kettlebility, complete with a wall of Christmas cards and family photos of the members on display in the hallway.

So what makes this gym so unique? First of all, nobody wears shoes. If you were to go on a run outside, you absolutely would need the cushion and support that a shoe would provide, but I learned that when it comes to true weight training, utilizing your feet on the floor allows you to work from unhindered balance and feeling the pressure of your heel makes you feel more secure, like you have a more solid foundation.

Secondly, not only does kettlebell training increase your physical strength, it can help your brain out too! I think it’s safe to say we could all need a little help in that department after the year that we’ve had.

“Cognitive loaded movement has been shown to create new brain synaptic linkages,” explains U-shi Chang. “So not only does it keep you focused, but it also re-patterns and teaches the brain to better communicate with the body and vice versa.”

U-shi Chang patiently answered all of my questions as she examined how I did squats, moved my legs over strategically placed obstacles, and brought me through a yoga-like sequence unlike I had experienced before, that left me with a glisteningly sweaty glow. Everyone who trains at Kettlebility has to go through this movement assessment to make sure there are no injuries, no habits that could cause later injury, and to focus on correct form from the very beginning. That way, no matter what area of fitness you want to explore, you’ve got a safe and strong foundation to build from.

U-shi Chang was even asked to take the Seattle Seahawks through this same assessment.

“I was contacted by their athletic trainer division to come in and help them get started with the FMS (Functional Movement System) and the FMS movement screen,” she said. “I was happy to help and it was cool to see how the team ended up integrating the use of the FMS in their training modalities.”

Whether you’re a professional athlete or just looking to shave off a bit of those quarantine pounds, there’s a place for you at this gym. Not only does Kettlebility make you think about how and why you move the way you do, it truly felt like coming into a welcoming community of people who are all committed to helping each other become the healthiest and strongest versions of themselves.

To try a little of their movement practice, check out this guided video of GFE: Ground Force Exploration led by U-shi Chang herself.

Want to support more small businesses like Kettlebility? We're proud to collaborate with Intentionalist, an online guide that makes it easier for you to find/connect with diverse local businesses owned by women, people of color, veterans, members of the LGBTQ community, and people with disabilities. While the products, services, and/or accommodations in this post were provided without charge, all of the opinions within are those of the author and the Seattle Refined editorial board.