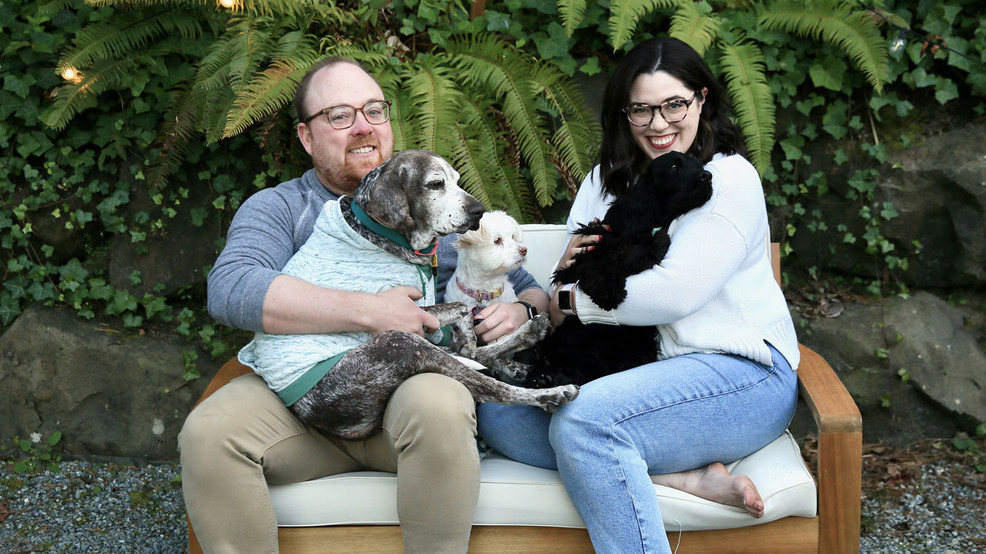 Seattle couple goes viral as they save senior dogs

Plenty of people adopted 'pandemic pups' during the COVID quarantine period. But one Seattle couple opened their hearts and homes to four older pets and never looked back. Now Adrian Lott and Spencer Erickson have made it their mission to advocate for senior dogs and have gone viral in the process.

It all started with Eugene The Senior Dog, which is incidentally the name of their mega-popular Instagram account.

Eugene, a German Shorthaired Pointer, was 12 years old when his fortune changed. Lott brought him home, but poor Eugene was terrified; he trembled and paced for hours.

"His foster mom told us that she felt that he was going to be a hospice dog, he was not doing well," said Lott. Eugene was very thin, had a serious skin infection and little energy.

"He would find a little bed and hide," said Lott. It took a couple of months for Eugene to feel comfortable.

"We kind of just gave him his space, tried to give him all the things that we thought would make him comfortable," said Lott.

She recalls the moment she knew Eugene was going to be OK, "I walked into a room and he was sitting, kind of in his bed, watching out over the whole house. And I walk up the stairs and he sees me, and he kind of just... looks at me and then kind of perks up, and then his tail just started slamming against the ground. He was happy to see me for the first time. And once the tail started wagging, it was wagging out of happiness, not out of anxiety."

Lott had assumed 12-year-old Eugene would be content to spend his time lounging. She quickly learned from people via social media that German Shorthaired Pointers are very energetic, even in their senior years.

This video shows Eugene grumbling and pacing, then letting out annoyed barks as he demands that mom fetch his breakfast.

"It’s been really fun to watch him come out of his shell and really get a second puppyhood because he is wild at our house," said Lott.

Their second senior was a tiny Chihuahua named Gus, who is actually a "foster fail."

"We were intending to foster him, but after his bonded brother died, we just couldn't let him go, so he stayed with us," said Lott.

Little Gus is deaf and has vision impairment.

"He came from San Diego Humane Society and got a second chance up here because their shelters are really overcrowded, so he was lucky that he got out," said Lott. "He’s obsessed with my husband. They are the best of friends, and he really doesn't care very much for me or for anyone else. He's got his best friend, and that's all he needs. We call him the potato because he looks like a little potato."

Next came Emma, a teeny tiny poodle who has become the life of the party.

"We call her our tiny terror," said Lott. But when Lott and Erickson first adopted Emma, she was probably in the roughest shape of any of the dogs.

"It was horrific," said Lott. "She had way overgrown hair, completely matted, it looked really dirty. You couldn't even see her eyes or her mouth."

Emma was 14 years old and had been left at the shelter.

"We called the shelter just about every day trying to get updates on her," said Adrian. "We probably annoyed them after a minute, but they had to hold her for a while, even though she was really in bad condition, just in case her owners were going to come for her, and no one did."

As soon as the shelter could legally give Emma medical care, she was given an extensive dental exam and a full shave-down. Records showed Emma was five pounds when she arrived at the shelter, and after she had been fully shaved, she was about three pounds.

"She had two pounds of mats on her tiny 3-pound body," said Lott.

Emma healed in a foster home, and then Lott and Erickson brought her home.

"When we first had her in our home, her spine was really completely curved," said Lott. "She didn't seem comfortable. We didn't know exactly how long she would be here."

Emma was the one that Lott and Erickson were the most concerned about.

"But over time, and with some vet care, she is wild. She is off the chart crazy," said Lott. "One of our favorite things that she does is that she screams. She kind of howls for attention or for food, so whenever she feels like she's not getting attention or enough food, she comes up to one of us and just stands at our feet and just starts yelling at us. She’s by far the smallest of our dogs, but she definitely rules the house."

Last month, Lott and Erickson learned of a 16-year-old dog in Hawaii that needed a home. Kalohi’s siblings had been adopted and then he was attacked and injured during a break-in at the shelter.

"We kind of just thought like, gosh, why not?" said Lott. "Why not just another tiny little old dog? We have the room, we have the time, we both work from home. Why not get him out of there and bring him home? So, I booked a trip to Hawaii... I spent a few days on the island and I picked him up and he and I flew back home and he's our most recent member."

Lott and Erickson have built a loyal following on social media by advocating for senior dogs. Why the older pets?

"The first reason is that seniors need it," said Lott. "They're some of the most overlooked dogs at shelters. People don't want old dogs; they want young dogs."

Lott said sometimes people think old dogs will have no energy and just lie around all the time.

"In our experience, old dogs have this renewed energy when they're brought home," she said. "Sometimes their needs were overlooked or some of their pain wasn't managed for whatever reason. And once they get some of that care, they get the chance to be a puppy again. We've seen that with Eugene, we've seen it with Emma, and so that's one of the reasons I think seniors aren't always what you expect they're going to be."

Lott said matchmaking when you're bringing home a dog is really important.

"For some people who don't want to go for four-mile walks every day, sometimes a higher-energy, younger dog isn't the right fit for them and bringing home an older or even a senior dog can be," she said. "So I kind of walk this line between sometimes I feel like, no, we do it for them because they need it, and then sometimes I'm really like, no, we do it for us because they're a better fit for our lifestyle, but also because of how amazing they are and how good it feels to have helped a dog who really needs it."

Susan Wyatt is a freelance writer for Seattle Refined, specializing in pets, gardening and all-around swell stuff in the PNW.