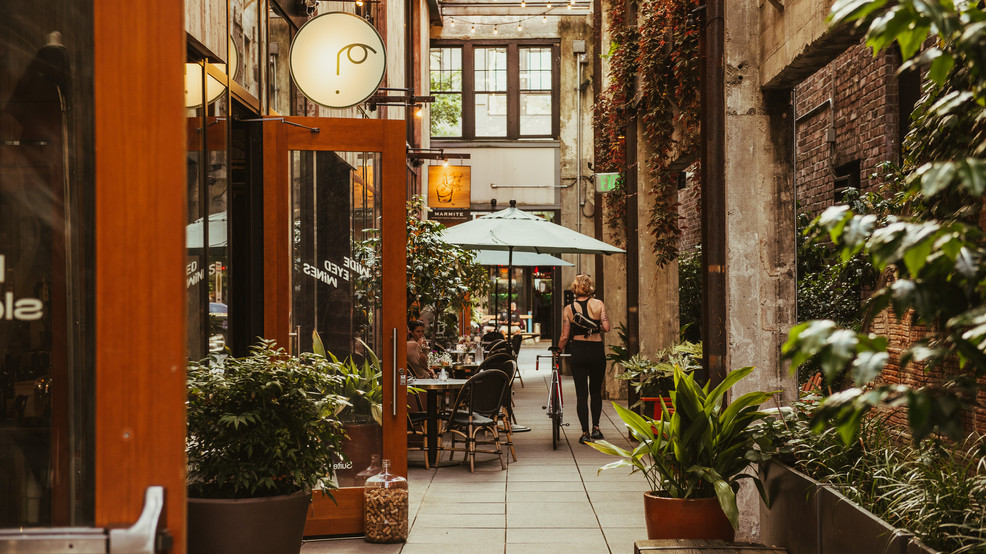 What you should know about Capitol Hill's Chophouse Row

A historic stretch of Seattle buildings is one of the hippest places to gather in town.

Capitol Hill's Chophouse Row can be described as "a very eclectic mash of old rehabbed buildings and cutting-edge new design," according to Liz Dunn, owner of Dunn & Hobbes LLC. Dunn bought a collection of old auto-row properties on this block about 22 years ago, and has been redeveloping them one by one ever since. Most of the buildings date back to the 1920s; the Baker Linen building on the corner of 11th and Pike was built in 1916.

"All the old buildings have been rehabbed," Dunn says. "In the case of one empty parking lot, we built the Agnes Lofts mixed-use building. The last one to be completed was the Chophouse building, in 2015, which is a new office building that was built literally on top of an old auto parts building."

Today, the bustling complex is about one-third loft office space, one-third residential loft apartments and one-third a ground-floor melange of retail, restaurants and other tenants, like a gym, hair salon and bike shop.

Because Chophouse features a pedestrian shopping alley, which is the entry to a courtyard in the middle of the block that connects all the buildings, the whole complex is referred to as Chophouse Row.

"We like to say that we put the 'mixed' in 'mixed-use development,'" Dunn says.

The central courtyard, which has become the anchor of the project, also has an outdoor, year-round stage where they host DJs and live music performances, plus events and festivals.

"All six of our buildings, as well as some neighbors, are connected to this central courtyard; and essentially, what were once back doors all became second front doors when the courtyard was completed," Dunn explains.

So what is the largest aim of this Pike-Pine corridor community space?

"We are in the heart of what is a very vibrant, culturally diverse neighborhood," Dunn says. "Our goal is to both amp up that cultural content, but at the same time give people an outdoor public place where they can sit, sip a coffee or a cocktail, see and be seen, but also find respite from the car traffic and hustle/bustle of the street."

Dunn explains that, by cultural content, she isn't only referring to the programming and entertainment they bring in, but fundamentally, their very creative locally-owned retail and restaurants.

"We don't lease to national chains," she says, "because it's just not going to add anything to the mix; this is an indie neighborhood where people are seeking out a unique experience. We like to support business owners with creative ideas who are just getting started, and we're proud of the fact that over half of our businesses are woman-owned or BIPOC-owned or both."

Another important piece of the mix: The Cloud Room co-working space brings in many local folks every day who are working on their own creative endeavors and appreciate the collaborative vibe of both the space and Chophouse Row.

"As I write this, the entire creative team for the new Bumbershoot festival that will re-launch this year (2023) is here for a meeting and are injecting their electric energy into the entire workspace," Dunn says. "The Cloud Room includes a bar and lounge with an outdoor deck, and operates as a sort of 'clubhouse,' in that the tenants of our office spaces at Chophouse Row also get member privileges at The Cloud Room."

Dunn says she can't emphasize enough how much mixing matters at all levels, "The biggest compliment we get from our office tenants is that they love working in Chophouse Row because it feels like they are part of their own village within a village, and they have this set of concentric circles of literally everything they could need or want. What's also very fun is when people (often out-of-towners but sometimes locals) who don't know about the Chophouse courtyard stumble into it and feel like they've personally discovered the most amazing hidden treasure. That's a pretty good compliment."

The team also finds it rewarding when someone mentions that they've recently been to an event here and had a great time.

"And because I work at The Cloud Room," Dunn says, "I love coming down to the courtyard any time of year, winter or summer, and seeing groups clustered around the fire pit in conversation and enjoying a drink."

Chophouse Row has recently undergone a few exciting changes. Earlier this year, Bootyland Kids put down permanent roots in the Piston & Ring building across from Good Weather Bikes. The complex also recently wrapped up a pop-up with Tilson XOXO, a local spoken word/hip-hop artist who also does visual art and has just launched a clothing line.

"Pop-ups are SO fun for us," Dunn shares, "because they bring something extra to the mix and they can also bring a new set of customers. We've just seen the launch of La Dispensa, an Italian deli and takeout counter inside the Chophouse building that is owned and operated by Sabrina Tinsley, chef and co-owner of beloved restaurant Osteria La Spiga, located just across the courtyard."

Looking ahead, the team always gets excited about spring when they relaunch the Chophouse Row outdoor music program.

"We have an outdoor piano that sits patiently all winter waiting to be played," Dunn says. And this spring, Butter Home, a locally-owned, sustainably-sourced homewares shop, will be relocating to the pedestrian alley between Wide Eyed Wines and Sweet Alchemy Ice Cream.

"The Cloud Room is also preparing to amp up our public cultural and business-oriented events and lectures in 2023, getting back to the level we were at before the pandemic."