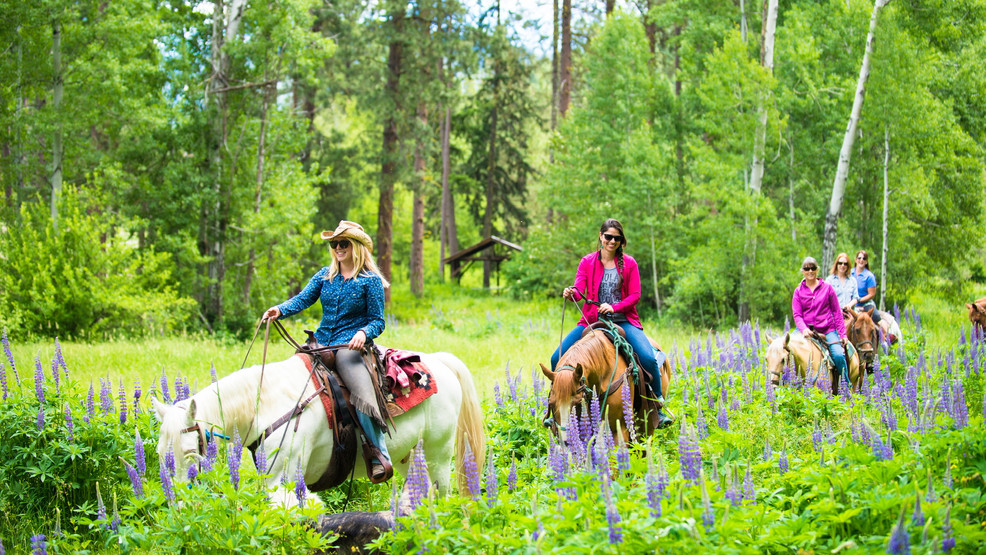 Saddle up with Wild at Heart Horse Rides near Leavenworth

"I love animals. I have my whole life," said Boyes. "I definitely love giving them a second chance. For me, it's the partnership that means the most with horses."

After spending eight years as a combat medic in the army, including two tours in Iraq, Boyes found herself drawn to the serenity of the mountains and the sense of peace that comes from working with horses. That led her to the Leavenworth area and, eventually, her own business, Wild at Heart Horse Rides.

"Really, it's taking people out on guided horseback rides through the woods. We've got a variety of rides, an hour-and-a-half, three hours, and then a half-day picnic ride," explained Boyes.

In all, Boyes and her husband Jason have about 15 horses, half of which are rescues. One of the things that sets Wild at Heart apart is that Boyes and her team practice natural horsemanship.

"Natural horsemanship is learning how to read what the horse is telling you. I can't, versus I won't. If they're scared of something, that you don't force them through it. That you reward the try," explained Boyes. "We ride without horseshoes. For the most part, we also ride without bits."

My horseback riding experience is admittedly limited, but Wild at Heart caters to both experienced and novice riders like me. Each ride begins with a 10-minute safety talk, then riders are introduced to their horses at the hitching post before hitting the trail.

During my visit, Boyes and I took a trail ride along Beaver Creek. She rode Caspian, a mustang who arrived at Wild at Heart during the spring. I was paired up with the youngest horse in the herd, Echo, an 8-year-old Morgan who loves both people and attention.

"When people come who have never been on a horse or had a bad experience (in the past), it's really fun for me to be like, 'Alright, let's give you the gentlest horse we possibly can,' and share their backstory so you can relate," said Boyes. "We've got one shot to do it right and make sure it's a good experience for people who have never been, otherwise they might not try it again. So, to me, I love that aspect of it."

Wild at Heart rides exclusively on private trails, meaning it's a rarity to run into anyone else while you explore this beautiful part of the Northwest. Pro tip: While it's gorgeous throughout the year, Boyes tells me the last two weeks of September and first week of October are particularly great times to ride because the fall foliage is on full display.

"We go alongside Beaver Creek for about the first mile. We've got meadows that are just full of wildflowers during the spring. For our longer rides, we start climbing into the mountains, so we have mountain views and Lake Wenatchee. Just beautiful views. So it really is a special place that welcomes you in. It's a quiet valley and you can feel the serenity once you're here," said Boyes.

On our ride, my buddy Echo decided he wanted to lead the group, so Erin and I pulled a switcheroo on the trail and I got to enjoy the second half of the ride with Caspian. (In Echo's defense, we were also shooting a TV segment, so there was more stopping and starting than a typical ride. He and Caspian are both, without question, very good boys.)

"Horses are living, breathing animals. They're not machines where you just hop in, turn a key and go. Each one has its own personality, its own quirks. We really try to give (our guests) a little bit about their horse before we leave, that way they can really start to connect with them. That connection is a big part of what I love teaching," explained Boyes.

You really do get an entirely new perspective of the Cascade Foothills while exploring on horseback. But, for me, the best part of the ride was the sense of tranquility and camaraderie that comes from spending time with the horses themselves.