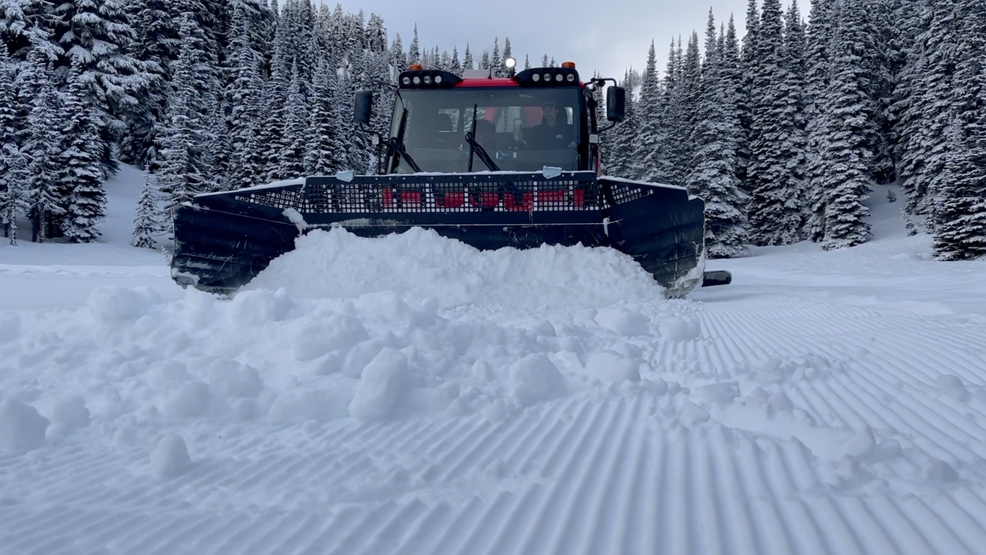 Riding shotgun in a Snowcat: See how Crystal Mountain is groomed

Skiers and snowboarders know nothing beats a powder day. But if there are no freshies to be found, the next best thing is crispy, untouched corduroy.

"You can go fast. Going fast is the most fun part of ripping a groomer. You set your edge and really get your carve on," said Connor Lyons, Snow Surfaces Manager at Crystal Mountain.

Boasting stunning views of Mount Rainier and some 2,600 feet of vert, Crystal Mountain is the biggest ski resort in Washington. While it's known for its steep, advanced terrain, there are still plenty of cruisers to be found on the mountain.

"A lot of our blue runs are perfectly groomed, where you can practice more of that intermediate terrain. It's just as satisfying as fresh powder if you get that fresh, crisp cord in the morning. It feels heavenly, thanks to our grooming teams," said Vivika Stamolis, Brand Manager for Crystal Mountain.

Grooming a mountain the size of Crystal requires a ton of time and coordination. So, when the lifts shut down for the day, the snowcats come out to play.

"It's a big, bad mountain. It's steep and, from a grooming perspective, it's a really challenging mountain to groom," explained Lyons, as we rode in one of the cats during an early March morning.

Lyons' team hits the mountain daily around 4:30 p.m., working in two shifts straight through the night. With the way the mountain is laid out, groomers are often alone on an individual run, which can be peaceful or incredibly challenging depending on the weather conditions.

"On a day like today, it's nice. The stars are out. But our grooming team is also here through the storms, through the blizzards, when you can't see a single thing. They're just plowing through, making sure all the snow we have here is top notch for skiing and riding the next day," said Stamolis.

"It's a big team effort that comes from everyone being super passionate about skiing. Everyone who is a groomer here skis and looks at (grooming) from a skier's perspective. They care about the product we put out," said Lyons.

Like most of the cat operators at Crystal, Lyons has more than a decade of ski industry experience. When it comes to actually grooming a run, that experience is critical.

"From the operating-the-cat perspective, that's a whole thing that takes a lot of finesse. Using the blade, using the tiller and figuring out the line the machine will stick to," explained Lyons. "It takes years and years to develop the skills, learn the mountain and figure out the best ways to do stuff. We've got a lot of people on the team with decades of experience who know this place really well."

Of course, the gig does have plenty of perks. Chief among them, cruising around the mountain in a massive snowcat.

"Not everybody gets to hop in a well over half a million-dollar machine like this and have this giant 2,500-acre playground to drive it around in," said Lyons with a smile. "It's fun every day. I love it."

Lyons dropped me off at the top of the Forest Queen lift, just before the lifts opened for the day, so I could test out the corduroy. It didn't disappoint.

"I just want everyone to have fun," said Lyons. "The snow isn't always going to be perfect, but we try to make it the best we can every single night. As long as you're sliding down the hill having a good time, that's all you can ask for. So, that's what I'm hoping for."