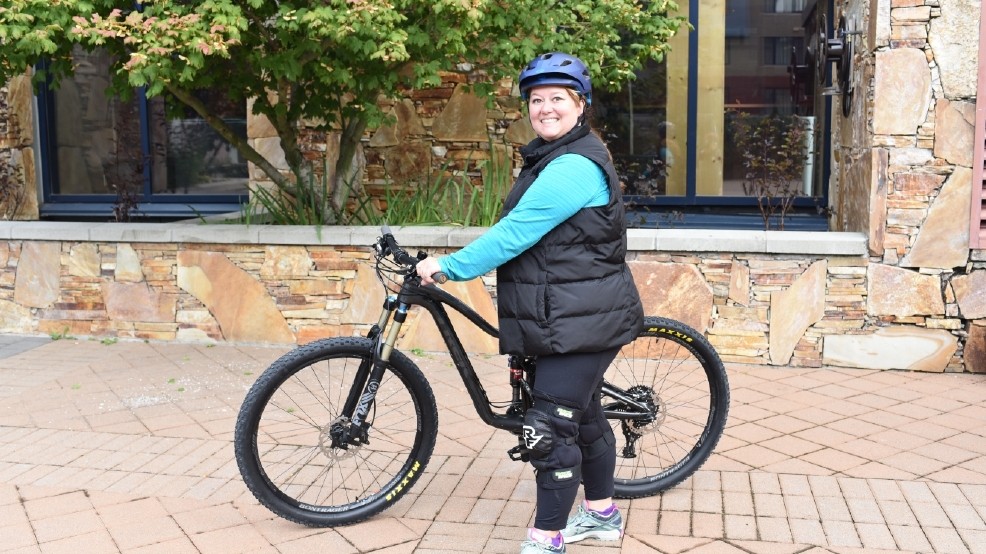 As I flew off the bridge, I thought, “Now what have I gotten myself into?”

A few months before my editor had sent out an email asking if anyone wanted to take part in Mountain Bike Camp otherwise known as the Trek Dirt Series up at Whistler. I was feeling adventuresome and chimed in with a hearty ME! I haven’t ridden a bike seriously since before my oldest child was born almost five years ago but the series promised to be great for beginners and even provided me with the proper gear.

The Trek Dirt Series is a women's (and sometimes co-ed) mountain bike instructional program with weekend camps held throughout Western Canada and the U.S. for the past ten years. The weekend school has taught new skills to more than 6,000 cross-country, black-diamond and downhill riders, ranging from beginner to advanced riders.

My day at mountain bike school started at the Summit Sport Shop where I was outfitted with a beautiful Trek Lush mountain bike. I learned some tricks that set a mountain bike apart from a road bike. I always assumed that mountain bikes just had bigger tires and straighter handlebars than road bikes. While that is true, they also have seats that easily lower for riding downhill and hydraulics that require air to adjust the shocks. Without shocks, your bike won’t have much bounce.

Once camp participants were situated, the welcome speeches and introductions began. I quickly aligned myself with a sweet Canadian named Alissa. We were in the same sessions and she gave me the low-down on camp since she had done it a few years before and was back for more.

Half of the group headed up to the Whistler Bike Park and the rest of us to Rebagliati Park for a morning session on skills. My coaches, Pam and Lauren spent the morning teaching us how to jump over logs, ride along skinny boards, decelerate down hills and the proper position for mountain biking. I learned that one should keep their pedals even and I had a terrible time remembering to do that. Also when mountain biking, one rarely sits on their seat and instead hovers above it which is great for the quads. Hovering above the seat makes it easier to maneuver the bike and absorb the shock of any obstacles. Lowering your seat when going downhill means you’ll lower the risk of the bike seat hitting you in the bottom. The skills session was awesome. I felt supported and like I could take on the world. In fact, I might have composed a text to my husband about how awesome I was at mountain biking. I would have sent that text too if I wasn’t worried about paying for international data. I left the skills session having done a few stunts that I wasn’t sure I could do and feeling amazing.

After a hearty lunch provided by the Trek Dirt Series, we gathered for our afternoon sessions. Alissa had warned me that the afternoon sessions were when things got real. I felt strangely comforted that my coach for the afternoon session as a nurse from Sweden. Lena was small but mighty. The sweep was her complete opposite at 6 foot 800 feet with a strong Norwegian accent. Thorn turned out to be my savior later in the day when he gently coached me down a trail that made me shaky and nervous.

Our group of six riders and two coaches headed out to the valley to explore the miles of mountain bike paths in Whistler. Lena took us up and down a few trails and reviewed our riding styles. She offered tips for improvement and cheered us as we tackled the rocky, debris covered paths. I struggled on an uphill section and was offered gentle encouragement as I climbed the hill. We tackled the Disco Boy trail and learned even more skills.

Then we headed toward a trail called, “The Torture Never Ends”. This trail was aptly named.

The group headed up the trail and Lena had us jump off our bikes to check out the wooden bridge trail. The bridge was sturdy and gently curved. We checked out potential obstacles and then started pedaling over the bridge, one by one. I let everyone in the group go before me and then started pedaling. As I initially pedaled toward the bridge, I stopped and backed up to start again. I hit the bridge pedaling hard but then let my mental fears take over. I wrenched my handle bars to the side and toppled off the bridge and onto the mossy ground below. My bike seat rammed me in the rear and my ankle twisted as my bike and body landed with a thud. Lena and Thorn were by my side in an instant. I took a moment to catch my breath and stood up. Lena told me to take some time and let the adrenaline of the fall slide away. Often people get right back up and start riding again but end up hurting themselves once the adrenaline slips away. We rejoined the group and started down another trail called “The Fountain of Love.” My mental game was shot though and I ended up walking a lot of the trail. Lena gave me a few pep talks but I was exhausted and mentally not into biking anymore.

My group was amazing though and tackled some really hard obstacles. We all took time to discuss strategy and gave a ton of High-5s. I have to say the support was amazing! After a few more hours of riding, the group headed back to the shop to return our bikes - and after eight hours of intense biking, I was beat! My family met me at the shop and we headed out to dinner. The rest of the group stayed for the maintenance clinics, beer, shopping and bike set up classes. I limped back to the Aava Whistler. My husband suggested that I soak in the hot tub where I bonded with a cyclist who had completed the Grand Fondo cycling race earlier in the day. By 8:30 p.m., I was face planted in bed and snoring away.

I got up at 6 a.m. for day two of the Trek Dirt Series. As I limped toward the bathroom, wincing along the way, I tried to psych myself up for another day on the bike. When I sat on the bed and almost cried from the pain in my rear, I decided to throw in the towel. I headed back up to Summit Sport to let them know I was bailing. The crew was super supportive about my decision to quit and no one made me feel bad. In fact, they all made sure that I had picked up my swag of a t-shirt and coffee.

While I’m pretty sure that mountain biking is not the sport for me, I did have an amazing time. I learned so much about mountain biking from some of the best in the sport. I have major respect for the bikers who strap on full frontal helmets and throw their bikes down steep paths. It is scarier than I ever imagined. I came back from camp raving about how awesome it was even though a full week later, I am still unable to sit for very long. Getting hit by a bike seat in that area of one’s body is quite painful but I’ll heal and I have the best story about the one time I fell off a bridge at bike camp. I also learned that trying out new sports when one is firmly an adult leads to amazing adventures.