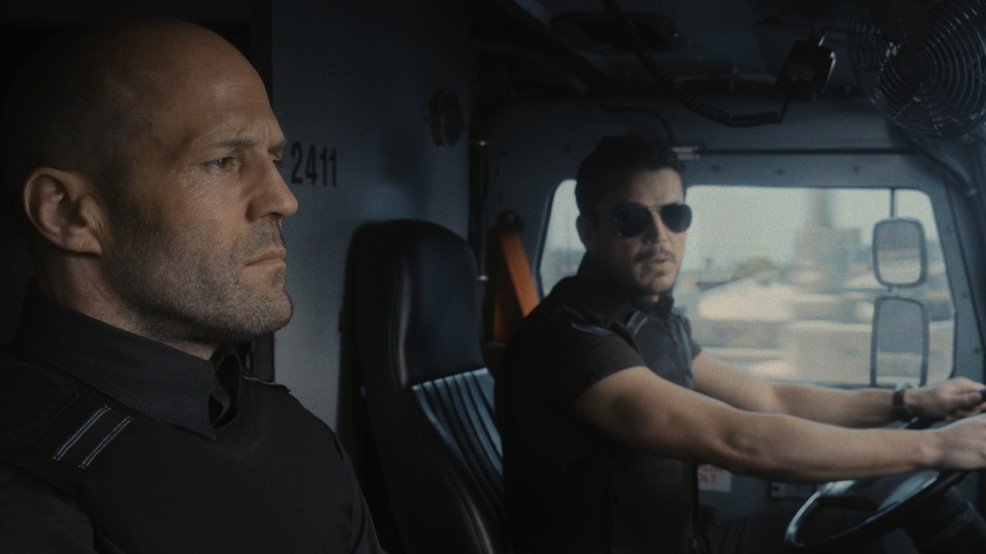 Review: 'Wrath of Man' is a straightforward revenge flick, wrapped in a heist film

"Wrath of Man" opens with the burglary of an armored vehicle transporting millions in cash. Unlike most heist films which use inventive thefts to introduce characters and establish motives, writer-director Guy Ritchie does none of that. The camera remains nailed to the back of the truck, panning from the two workers in the front to the bandits gaining entry in the back. They are forced from the vehicle and kept, hands behind their heads, at the front, just barely in the camera's view which is how we see someone shooting these security truck workers at point blank range.

The film then promptly cuts to frilly, Bond-esque title sequence with animation and dramatic music, and I was turned off immediately. There's no fanfare. No intrigue. The event isn't expounded upon, not right away at least. It felt like a cold open too frigid for the kind of movie I was expecting. Ritchie is known for his colorful language, vibrant characters and fast-paced action sequences. This scene, delivered in one long shot, was a letdown.

This is Ritchie's intention, of course. "Wrath of Man", albeit a straightforward revenge flick wrapped in a heist film with heavy gangster iconography and a smack of mystery, is far different than it lets on in its anticlimactic opening. The subsequent scenes that follow the robbery employ a melodramatic score that doesn't match the lack of action and suspense. Ritchie is here to deliver the slow burn. A long, creeping reveal that is so much more rewarding. Instead of hitting over the head, he spends a good portion of the film buttering us up before delivering the fatal blow somewhere least expected.

Jason Statham, that bald British guy you imagine bludgeoning someone to a bloody death in every film he does, is teaming back up with the director that put him on the map. "Lock, Stock and Two Smoking Barrels" was the first feature film for both Statham and Ritchie. They went on to make two more films together and plenty of others apart. Statham certainly found his niche early on and is probably best known for franchises like "The Transporter" and "The Expendables". In recent years, Ritchie has found a softer side with projects like the live-action "Aladdin" adaptation and the Robert Downey Jr. star vehicle "Sherlock Holmes".

It's been over 15 years since their last collaboration, and they've waited for a homecoming that feels true to Ritchie's sensibilities while also playing up Statham's on-screen strengths, namely looking grim, kicking butt and saying as few words as possible - precisely what "Wrath of Man" accomplishes. Statham stars as H, a new hire at a security company in Los Angeles. He passes the necessary tests and survives the taunts of long haulers Bullet (Holt McCallany) and Boy Sweat Dave (Josh Hartnett) to oversee the transportation of millions of dollars.

H is mysterious, quiet, but obviously skilled and capable of more than this job demands. Questions abound as to his motive and background. Ritchie purposefully keeps H close to his chest for much of the film's first half. It's frustrating just how little we understand about H, but it makes the pay-out that much sweeter. In true Ritchie fashion, the film jumps around in time without much explanation, showing sequences of events out of chronological order and left up for the audience to piece together.

It turns out H has an unsavory, hardly wholesome background as a crime lord. When he and his son are unwitting casualties of the robbery that kicked off the show, H won't stop at the ends of the earth to exact revenge on those who flipped his life around so completely, even if that means infiltrating the security company and playing down what he is really capable of. Jeffrey Donovan and Scott Eastwood star as objects of H's rage and those who set these acts in motion thanks to the heist-turned-homicide.

Andy Garcia plays a high-up FBI agent who helps H, but adds little to the story, mainly because we don't want the realities of the law. We don't care that H should be locked up just as quickly as his adversaries. The rules of engagement in a Ritchie film are such that the bad guys are good, but the other bad guys are bad, and the distinction there is made only by the look of them. Eastwood is our main antagonist, a rogue villain with sights on the prize for only himself. He has a wild visage with one eye squinting like he is constantly fighting his urge to kill. He makes for a good ol' fashion, if not somewhat vacuous and impulsive villain.

In the end, this is Statham's party. He can speak hardly nothing at all and still convey every emotion, every thought required for easy viewing. His strong screen presence fills the void and shields our eyes from the holes here and there that pock the road that Ritchie has paved, making "Wrath of Man" exactly the kind of watch we expect: surprisingly elevated fun.

"Wrath of Man" is in theaters now.