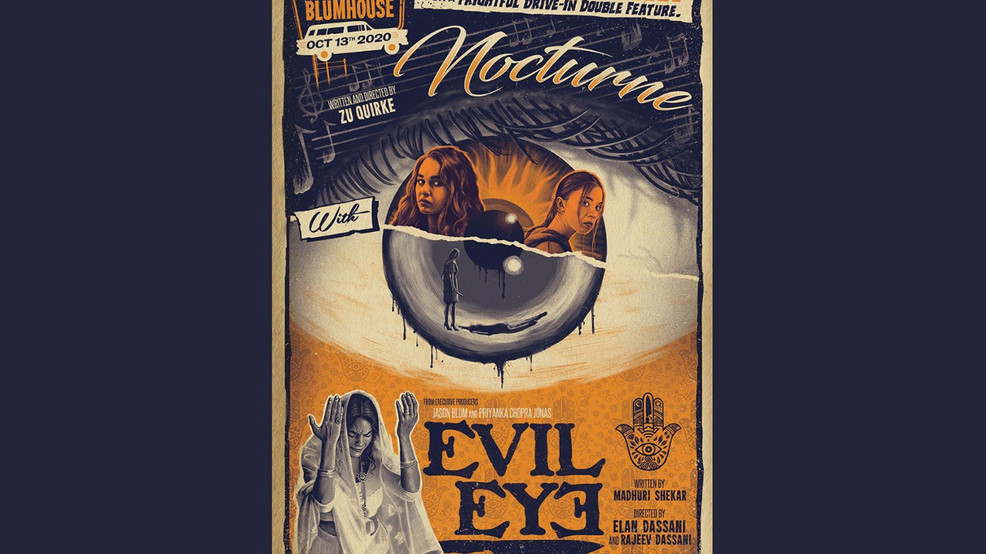 Did the first part of our "Welcome to the Blumhouse" review leave you hankering for more? Well hold on to your butts - there are two more films available on Amazon Prime Video beginning October 13 as part of the aforementioned curated anthology, and we have the lowdown below.

A controlling, abusive ex-boyfriend comes back from the grave - err, back in the body of a new man, we should say - to haunt the object of his obsession and her adult daughter in "Evil Eye", a supernatural thriller that possibly thrills, but doesn't necessarily surprise. Pallavi (Sunita Mani) lives in New Orleans, a young, single independent woman. Her mother Usha (Sarita Choudhury) is her somewhat stereotypical Indian mother who nags at her from across the world to find a husband already. Usha takes her daughter's personal life very seriously and sets her up on dates with single men around town.

However, after a meet-cute with a stranger in a coffee shop, Pallavi may have found Mr. Perfect on her own. Sandeep (Omar Maskati) is uber rich and uber serious about their future. No games, Sandeep sweeps Pallavi off her feet, moving her out of her crumbling apartment and into a swanky house, supporting her while she quits her job and works on her burgeoning novel.

But Usha, having only seen Sandeep in photos, has a bad feeling. There is a mystery in her past that involves a confrontation with an angry, undisclosed man. Every time she sees Sandeep, she relives the trauma of her past encounter and foresees a grave future for her daughter. There is plenty of consulting the ancient art of Vedic astrology, and though the professional astrologer reassures her that their charts are aligned for optimal compatibility, Usha quite often rifles through her papers with a concerned visage (which is never quite explained). Of course, had Pallavi worn her evil eye bracelet, perhaps none of this would have happened and the nefarious Sandeep would have been kept at bay.

The film has an interesting premise and promising hook, but falters in the character-building department. There is too much time spent on serious phone conversations: Pallavi reassuring her mother that Sandeep is a good guy; Usha alluding to a terrible fate should she not be cautious; Pallavi's father oblivious, attempting to diffuse the tension his wife builds. Her relationship with Sandeep feels surface level, just as Usha's relationship with her abusive ex-boyfriend never strikes a cord when we're only given a few snapshots of their final encounter.

"Evil Eye" has some fun with the superstition and iconography of Indian culture - as well as the personality of overbearing Indian mothers - but the film could work on fleshing out its characters so that when the action does start, we're fully invested. That being said, the performances by all are strong, and it is sure to entertain fans of the stalker/thriller genre.

If "Black Swan" had included a Faustian bargain and was set in a high school for the arts, then you would have "Nocturne", a poignant, potent psychological thriller that taps into the loneliness and acute competitiveness felt by those aiming for the top.

Juliet (Sydney Sweeney) and Vivian (Madison Iseman) are twins who compete not only for popularity, but for the singular slot in the year-end showcase. As far as piano abilities go, Vivian is the greater talent and shoe-in for the high honor. She is widely regarded as the best in her class and is Juliard-bound the next year. Juliet has worked tirelessly to compete with her sister, only to have anxiety get the better of her. It is Vivian's confidence in her art and in herself that propels her forward musically, gets her the boy and allows her to surpass Juliet at every milestone.

Until one day Juliet comes across a notebook with strange symbols and eery drawings that come true. She has signed some deal with a higher power that takes down her enemies, in this case her accomplished, "perfect" sister, and clears the path for her shining moment. But the price for greatness may be the ultimate sacrifice.

A nocturne is a musical composition inspired by or referring to the night. In this case, it surely references the literal dark side of musical expression and performance, the sacrifices some will make to join the ranks of the great. While most have the natural capacity to balance the pressures of the calling with the passion for such artistry, others who have the skill and desire go to far darker lengths to achieve recognition.

"Nocturne" by fledgling writer-director Zu Quirke offers much to digest with her first feature film, requiring a second viewing to completely catch all the subtleties and underlying messages. Her characters are flawed, but real, jumping off the screen through their vulnerability and, often the case, unlikeable traits. We never fully understand the symbols carved into random places, taunting Juliet, or the powerful force that lures her in with the promise of success. But where the film feels vague and underdeveloped, it compensates with dramatic performances and a mystery behind every corner. It's moody and visually appealing, and though the special effects may not be on par with similar films of bigger budgets and veterans at the helm, "Nocturne" is a strong debut for an artist with a vision.