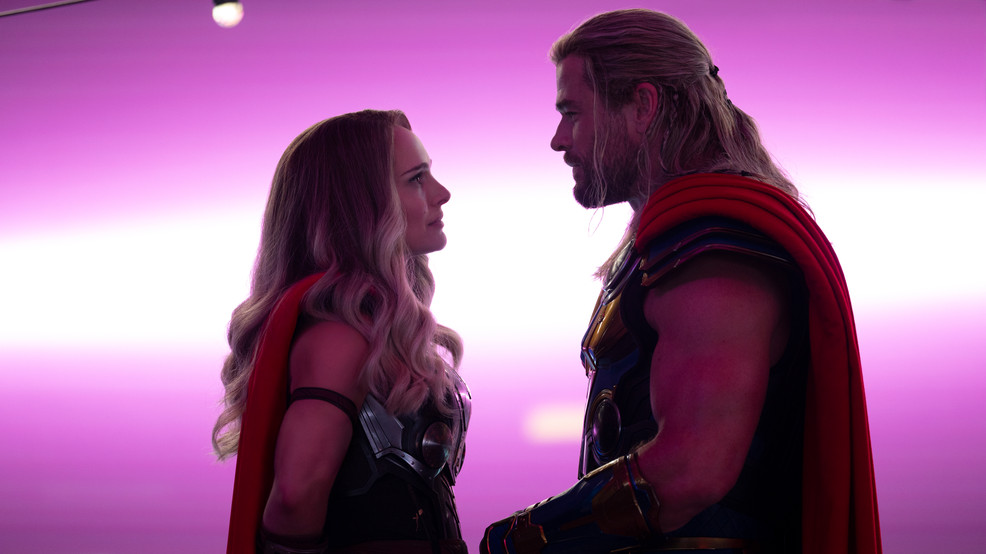 Review: 'Thor: Love and Thunder' nails cameos but can't hammer down a plot

As far as undertakings go, topping "Thor: Ragnarok" is a big one. The third film in the Marvel series of the dim-witted, self-absorbed god of thunder Thor, played with cheerful ignorance by hunky Chris Hemsworth, "Ragnarok" had it all: gladiator-style fighting, a non-human creature Korg voiced by the incomparable Taika Waititi, a sensible plot and a merciless villain of which nightmares are made, Hela (Cate Blanchett), the goddess of death and Thor's maniacal half-sister.

The shoes its predecessor "Thor: Love and Thunder" need to fill are not just big, they're of god-like stature. So it should surprise no one that writer-director-star Waititi took what worked so well in "Ragnarok" and tried to do more, resulting in a messy, gag-filled installment that may have a tremendous number of high-profile cameos, but can't come up with a fully realized message to save its life, or more aptly, the life of smart and pretty Jane Foster.

Natalie Portman reprises her post as Foster, Thor's ex and a well-published physicist who, in addition to battling an aggressive cancer with rounds of chemotherapy, has taken up Thor's hammer, reconstructed after Hela crushed it to smithereens. That's right, "don't call me Lady Thor" is now a god, a storyline that was written into comic book lore by Jason Aaron when he took hold of the Thor comics in 2012.

But unlike the published series, which presented the new female Thor to readers without any insight into her true identity for a full seven months after her debut, "Love and Thunder" rushes to the punchline. Foster's sudden ability to wield Mjolnir, thereby becoming Thor (but still alongside male Thor, whose new emotional support weapon is an enchanted, easily jealous ax called Stormbreaker) is a sorely and poorly presented twist, one that complicates and confuses our understanding of how gods work in this Marvel universe.

By comparison, Valkyrie, introduced in the last film, is a "serious" female fighter who leads Asgard as king and whose credentials to reign and abilities in battle never fall into question. In the hands of actress Tessa Thompson, Valkyrie is the obvious power top, an accomplished warrior who, unlike Portman's showboating deity, isn't focused on ridiculous things like creating the perfect battle cry. Foster (as Thor) has the strength and divine capabilities, but her muscular physique is likely more distracting than empowering for female viewers. As women, we're told we can do it all, but Jane Foster may have been better left in the laboratory, fighting inequality and misogyny with her mind, not her ex-boyfriend's used hammer.

What "Love and Thunder" does perhaps even better than "Ragnarok" is its villain, Gorr the God Butcher, a grim reaper dressed in drab robes, eliciting religious imagery and undertones that have been perverted by the ultimate evil. His eyes are terrifyingly luminescent, and with the help of his near impenetrable weapon known as the Necrosword, Gorr is a fearsome, mighty opponent brought to even darker, lurid light in the hands of master actor Christian Bale.

Gorr, shunned, forced to watch his child perish in his arms and left to die himself by the gods he once worshipped, has taken up the mission to rid the universe of them altogether, tracking each deity down one by one and, as his name implies, butchering them. His aggressively antitheist rhetoric worries even the greatest of all gods, Zeus, played with a lustful, lackadaisical Greek accent and attitude by Russell Crowe. Zeus refuses to help Thor and company track Gorr down to kill him and to rescue the legions of Asgardian children that Gorr kidnapped. Desperate, Thor and Valkyrie steal Zeus' thunderbolt during their boisterous exit. With the thunderbolt in hand, they finally have a chance at stopping their immortal, amoral enemy before he opens the portal to Eternity and causes irrevocable damage to the Marvel universe at large.

Waititi continues the tradition set by "Ragnarok" of irreverent dialogue, high-adrenaline action sequences and unexpected cameos, which, though good for a laugh, are completely out of place. Why, for instance, Melissa McCarthy and Matt Damon star as Hela and Loki, respectively, in a staged play about Thor is beyond my pay grade. Hemsworth's Thor is only multi-dimensional around the biceps, and it was thanks to Waititi and his reinvention of the property with "Ragnarok" that Thor was given a fourth film, the most of any standalone hero MCU properties.

And while the blending of genres has become a tentpole for modern superhero movies, "Love and Thunder" is a vampire, sucking all the life from each genre it emulates. It attempts an epic quest that splinters into an overwrought romantic comedy that suffers from a serious case of science fiction horror dramedy. Gorr may not be pretty, but he could be on to something. By the end of "Love and Thunder," killing off all the celestial megalomaniacs becomes a terribly enticing proposition.

"Thor: Love and Thunder" is in theaters now.