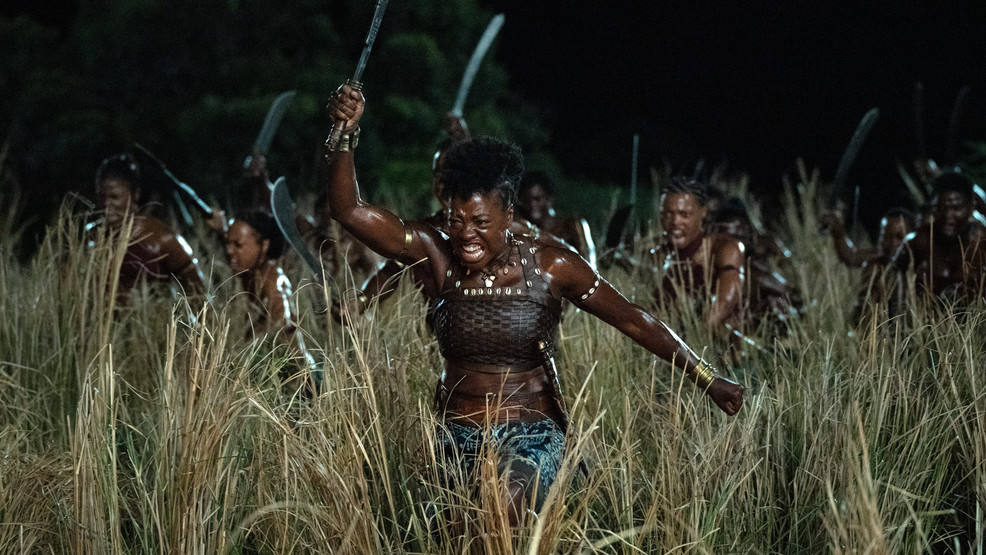 Review: 'The Woman King' rules on the big screen

In a montage sequence that is almost impossible to watch without breaking into "I'll Make a Man Out of You" from Disney's "Mulan," a young girl raised in the Kingdom of Dahomey on Africa's west coast, now called Benin, goes from scrawny but determined orphan to ruthless killer warrior. Despite the back-breaking training, Nawi (Thuso Mbedu) wants this opportunity, a rare one afforded to females in the 19th century that doesn't involve childbearing and rearing, and she is willing to run faster, punch harder and risk her own life for it.

As cliché as it may sound, getting "The Woman King," a $50-million epic was, like Nawi's, its own uphill battle. This is a film with a predominantly Black female cast in a story that would often target a more male-leaning audience. (Ask any one of your guy friends how many times he's watched "Braveheart" or "Gladiator") Like those other beefy, violent, male-centric movies, "The Woman King" keeps its realism, despite an industry that loves to doll up its female stars in perfect hairstyles and goopy mascara. The warriors sport natural locks and wear outfits that don't glimmer and glitz in the sun. They look like real women, and what they deliver are heartfelt portrayals of dark-skinned she-soldiers leading the charge. There is no white savior, and by the film's end, you'll be yelling war cries along with them. As one of the first of its kind, "The Woman King" rules.

The Agojie, known as the Dahomey Amazons by European colonists who named them after the vicious fighters of Greek mythology, were a real-life all-women regiment of mercenaries and protectors, sent out by Dahomey's monarchy to enforce trades, raid other sparring kingdoms and keep their people safe. Read up even a little bit about the Agojie, and it becomes evident that they are not always the "good gals" of history. They also pillaged, brought home heads on spikes and made their kingdom wealthy in the slave trade which was in full force at that time.

But is there a story more ripe for a Hollywood reimagining than a battalion of kick-butt women who are revered by their people and given the right and respect to fight as equals to their male counterparts? Viola Davis, who stars as Nanisca, the highest-ranking general and righthand to John Boyega's King Ghezo, certainly didn't think so. She produced "The Woman King" and was a driving force on getting it made in the first place, taking the script by Dana Stevens based on her story with Maria Bello, and pairing it with Gina Prince-Bythewood to direct. This all-women behind-the-scenes crew gives the film's story what it absolutely needs in order to work: not the "feminine touch," but the female perspective without any malformation thanks to the male gaze.

The film opens and jumps quickly to that aforementioned training sequence which is a little tedious and a lot Disney-fied. Nanisca, flanked by her seconds in command, Amenza (Sheila Atim) and Izogie (Lashana Lynch), teach the new recruits what it means to be Agojie. The young newbies consist mainly of teenagers from poor families or girls acquired from other tribes during raids, and their rags-to-riches journey of shaping up and becoming worthy of joining the team is feel-good, if banal, fodder.

Regardless, the Agojie fight hard and tirelessly, but they also share a warm and affectionate sisterhood with one another. There's sword fighting and hand-to-hand combat, followed by laughter and camaraderie. Nawi is strong-willed and even stronger-minded. Her particular sense of right and wrong gets her noticed by her superiors, particularly Nanisca whose steel trap of emotions might be tested when Nawi's appearance in the camp brings personal history to the surface.

Though it may start slow, "The Woman King" ramps up from there. Nanisca is set on convincing King Ghezo to give up the slave trade they've had a hand in for many years, opting instead to make use of the Gold Coast's opulent natural resources like cooking oil. (Again, this was likely untrue, but we're willing to overlook some of the ugly inconsistencies for the good of our female leads and their otherwise inspiring story.) This does not jive with an enemy tribe and its conniving, opportunistic leader Oba Ade (Jimmy Odukoya), a brutish and fearsome opponent whose own dealings with white slavers is at risk.

Davis, Atim and Lynch are the trifecta of Black girl power, owning the characters with such heart and bravado, you may think they were Agojie in a past life. These are physical portrayals, as well as emotional, and the actors are given the time and space to fully live in the story thanks to Prince-Bythewood's pacing. Once the fighting begins, it's hard to remember our impatience in the outset.

"The Woman King" weaves story into history and brings to life the oft-forgotten prowess of this strong, female troop. Their connections run deep, their chemistry is undeniable, and even the staunchest fan of that Mel Gibson Scot movie will warm up to the new warrior king in town.

"The Woman King" is in theaters now.