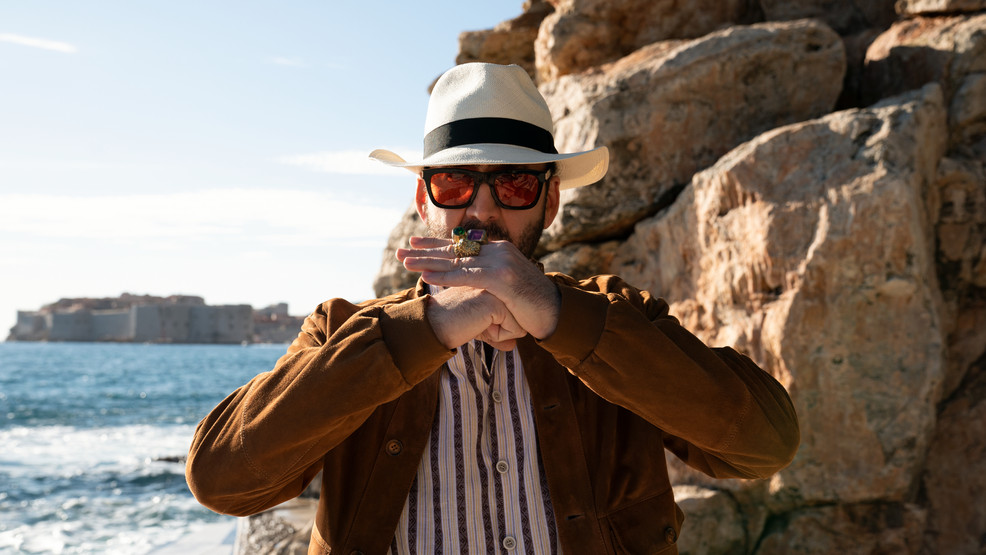 Review: Nic Cage as Nick Cage in 'The Unbearable Weight of Massive Talent'

Of all the working actors in Hollywood, there is no one else with the wily cult following like that of Nicolas Cage. Etsy is filled with pillows, greeting cards, even oven mitts plastered with his face and featuring jokes derived from his most notable roles. He's a bonafide "National Treasure," a pun so obvious and overused, it feels almost fresh, marinated in its own ridiculousness. This is perhaps why Cage has never been more primed (or desperate for cash?) for a film that pokes fun at his on-screen and off-screen personas. Because as much as they seem irrevocably intertwined, the two are very different. It is this distinction that is blurred and obscured, and the "real Cage" is based on pop culture lore and public romanticism.

In "The Unbearable Weight of Massive Talent," Nick Cage (played by Nicolas Cage) is spinning his wheels, trying to be taken seriously as an actor while also making enough money to fund his lavish lifestyle. In the film, that is a hefty bill racked up at the Sunset Tower Hotel; in real life, Cage has been notorious to make unusual purchases like a mausoleum in New Orleans, exotic reptiles and, at one time, having 15 estates to his name, including two European castles. (Almost too incredible to believe, he reportedly squandered his $150 million fortune, which would explain the slew of recent roles that went straight to VOD.) The film doesn't go so far as to show this outlandish, very real aspect of Nicolas Cage. Instead, it parodies an excessive, ostentatious, ludicrous Hollywood celebrity with, all things considered, cautious moderation. Nick Cage agrees to give the public a diluted version of Nicolas Cage, which is enough to pacify most viewers.

It is not his real family in the film either, but a fictional one. In place of his five marriages and two, going on three, children, we're given one ex-wife Olivia (Sharon Horgan) and one teenage daughter Addy (Lily Sheen, real-life child of actors Michael Sheen and Kate Beckinsale), who are sick of his unending search for fame and wealth at their expense. After a particularly hurtful rejection in a rash move to change his life's trajectory, Cage accepts the offer of a mysterious billionaire super fan Javi (Pedro Pascal) to fly to Mallorca for his birthday party. In true Cage action-adventure movies, he unintentionally becomes a CIA informant, overseen by two bumbling agents (Tiffany Haddish, Ike Barinholtz) who apparently have no resources or manpower at their disposal, and this high-profile celebrity is their only hope. While Javi, a sweet cinephile with a massive collection of Cage memorabilia and an unexpected love for "Paddington 2," is also a drug kingpin. Pascal has the rare ability to incite fear and garner immediate adoration in viewers, and his Javi is wholesome, with the veiled threat of danger at all times. Understated, while also over the top. It's an impressive duality that elevates the film.

Cage (the fictional one) has some outrageous quirks we can only hope translate into his real life, as well. As a practitioner of Jiu-Jitsu IRL, Cage in the movie uses the "Palm Hold Fist" greeting with comical frequency. He jumps into a monologue for a director (real-life director David Gordon Green) at the valet of the Chateau Marmont. He is even haunted by an apparition of his younger self, a terrorizing, abusive conscience incarnate that allows Cage and the audience to poke fun at the gags and hyperbolic persona from the actor's youth. It's a weird, trippy bit of CGI that delivers some of the film's best laughs and shows just how far Cage is willing to take the joke. At least, finally, we know it's a joke he's in on.

Here, again, I find there is something missing. Written by Tom Gormican and Kevin Etten and directed by Gormican, "Unbearable Weight" is certainly clever, and it certainly knows its Cage. The film weaves through genres like Cage's career, dipping into family drama, dabbling in buddy rom-com, throwing in espionage before culminating in the action that, for many, defines a Nicolas Cage film. It is totally meta and freely recognizes its many allusions to the actor's actual life and vocation, though with the caveat that it will only go far enough to hit the punchlines and propel the preposterous story forward. We can all laugh at Cage being recognized for his work in, of all projects, "The Croods," but there is very little of the darkness we all know inevitably goes hand-in-hand with immense fame and artistry. To that extent, this becomes another way for Cage to cash out on a project that has plenty to offer his loyal fans. It is his moment, we're just relishing in it alongside him and, mostly, at his arm's length.

"The Unbearable Weight of Massive Talent" is in theaters now.