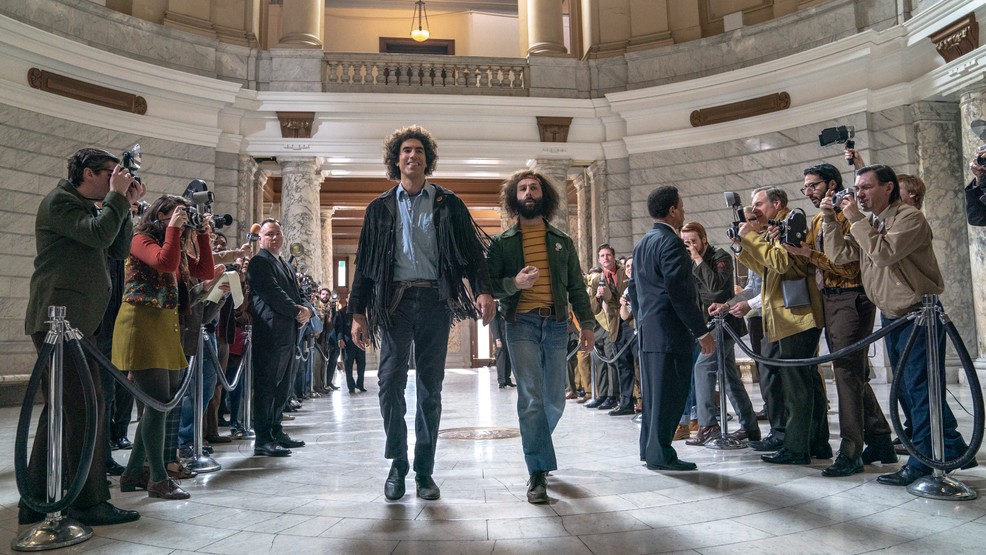 Review: 'The Trial of the Chicago 7' is, above all else, timely

Aaron Sorkin's latest film - though written just before the 2008 writers strike, then shelf-strewn until it finally went into production ten years later - is, above all else, timely.

Writer-director Sorkin is known for his fast dialogue, witty banter and the momentum both of those bring to his films, and in this sense, "The Trial of the Chicago 7" fits the mold. It is precisely what you would expect in the best possible way, because the Oscar-winning writer (he won for "The Social Network" in 2011) has the uncanny ability to break down difficult, cumbersome true stories plagued by numerous characters and many other moving parts and simplify them without losing intellectual integrity.

Which is why the subtleties in "The Trial of the Chicago 7" - the droll, but brief cross examination of the city permits official or else the quick cuts to each of the defendant's journeys to that fateful protest - matter. What begins as a straightforward courtroom drama that must tackle a dozen complicated, larger-than-life personalities and the many legal ramifications from their various decisions becomes performance art, and the the aforementioned momentum runs the film like a skillfully choreographed ballet.

Based on the famous trial that captured the attention of the nation, "The Trial of the Chicago 7" takes place in 1968 in, of course, Chicago - where the Democratic National Convention was being held. This was just months after the assassination of Martin Luther King, Jr. which led to the infamous Chicago riots. Relations between the police and protesters were notoriously unstable, but the trial itself proved to be a mockery of law and order and an excuse to make an example of select anti-war organization leaders. Caught in the crosshairs is prosecutor Richard Schultz (Joseph Gordon-Levitt) who feels the pressure to win a conviction, but even more so to play by the rules of the law he serves. Overseeing the trial, Judge Julius Hoffman (Frank Langella) has no such problem using the powerful post he holds to sway the trial against the unruly, disrespectful troublemakers.

And disrespectful, they certainly are. Founders of the Youth International Party - Yippies for short - Abbie Hoffman (Sacha Baron Cohen) and Jerry Rubin (Jeremy Strong) use every opportunity to mock Judge Hoffman, dressing in magistrate's robes or calling out his determination ("Overruled!") simultaneously with him. David Dellinger (John Carroll Lynch) has an outburst that results in physical violence. Mixed up with the "Chicago 7" is an eighth defendant - Bobby Seale, co-founder of the Black Panther Party. Seale was was lumped in with the others, despite the fact that he was only in the city a few hours. In fact, the others may have met, but they were in no way masterminding the riots that ensued. After being literally and figuratively bound and gagged in the courtroom, Seale was eventually separated from the others for a trial that never happened.

Tom Hayden (Eddie Redmayne) and Rennie Davis (Alex Sharp), protest organizers from the National Mobilization Committee to End the War in Vietnam, are the soft-spoken, level-headed, straight-laced intellectuals in the group and a stark contrast from Hoffman and Rubin's boisterous, long-haired hippie personas. The film emphasizes this point; even the white, educated, "good" guys aren't safe from political forces, though it is obvious by Seale's treatment just how much worse a Black man has it, denied legal representation and physically restrained.

In the final scene, Redmayne's character has his grand moment in court. Arms raise in fists around him, a universal symbol for resistance and solidarity. Despite being anti-war, pro-peace, liberal-leaning, etc. the film portrays Hayden as the centrist amongst the radicals in custody, standing (albeit, on impulse and by accident) for the crooked judge when the plan had been to make a statement by remaining seated. To his fellow defendants, this is akin to treason. The final rallying cry from Hayden and his brazen insubordination to the judge feels a bit lackluster. We know whose side he's on (he's on trial alongside the others for goodness' sake), and it is the one underwhelming moment the film allows.

The story strikes many parallels to the current state of affairs in America - a climax, of sorts, for decades of questionable acts by the police against anyone who dissents, though it is important to note that the police aren't completely vilified, per se. Instead, they are part of a bigger system whose aim is to push through their agendas, regardless of who is hurt by it and whose rights are denied. It's hard not to watch "The Trial of the Chicago 7" and feel like perhaps they are actually being tried in 2020 in Portland or Kenosha, because although they were against the Vietnam War, the trial itself brought to the spotlight the role that police played in these peaceful protests turned violent.

"The whole world is watching!" chants the crowd throughout the film. It had become synonymous with this specific anti-Vietnam War protest. Used instrumentally in the film, the slogan feels even more tailored to the current climate of race relations, police relations and the general malaise sweeping our country: the feeling of being one nation completely divided. The whole world is watching the injustices still being committed, and the whole world is also watching this "trial", if you will. We're watching how the law and the government are handling it this time around, and to see if history teaches us anything.

"The Trial of the Chicago 7" is available to stream on Netflix.