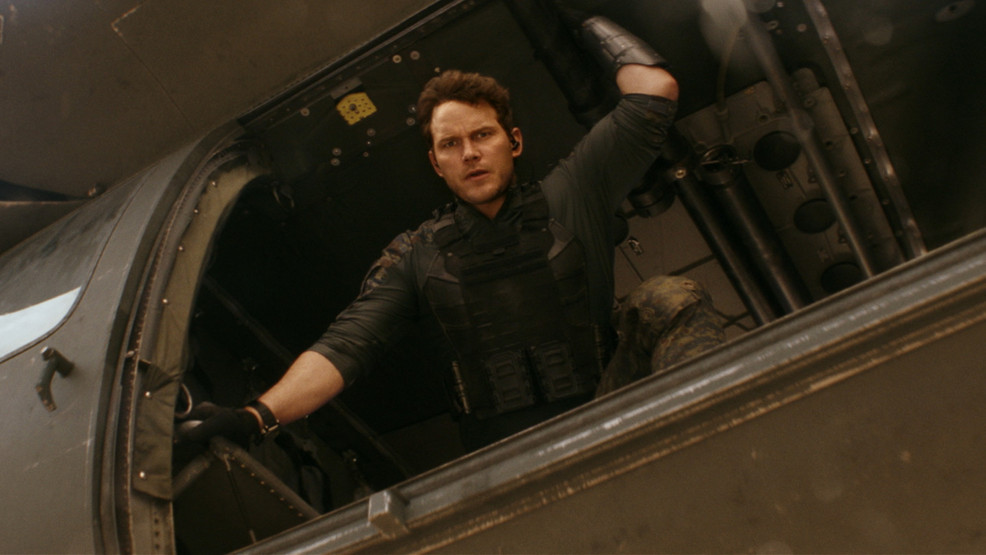 Review: 'The Tomorrow War' is best suited for the big screen experience

Chris Pratt certainly isn't trying to reinvent the wheel - or even step outside the film genre he has been dominating in recent years - but there is one aspect of "The Tomorrow War" that will give action fans a reason to rejoice: it isn't a remake, an adaptation or part of a billion-dollar franchise. Written by Zach Dean and directed by Chris McKay, the big-budget sci-fi military action thriller arriving direct-to-streaming on Prime Video is certainly, like most in this genre, better suited for the big screen experience.

But it isn't just a shoot-'em-up fantasy western; the central themes of family, love and sacrifice permeate the narrative. Even if the "war" feels underdeveloped or some of the relationships are more superficial than others, there is a more wholesome, enduring undercurrent that carries the film through to a satisfying, slightly cliche finish.

Pratt leads the charge as Dan Forester, a military veteran, a high school biology teacher and a family man. He seems to have everything: a wife (Betty Gilpin) and young daughter (Ryan Kiera Armstrong) he loves and a fulfilling job that allows him to influence future generations. What can come between Dan and a life of contentment? You guessed it! The annihilation of humankind. He and everyone else on Earth are shocked by a message from the future: in 30 years, a violent alien species will attack the planet, throwing the human race into near extinction. Military forces from 2051 have discovered a time hop thingy (don't look too closely or ask too many questions) that will allow fighters from the present to aid in the global alliance against take on these deadly creatures and to save their future from a dark reality. As such, everyday citizens are drafted and unceremoniously thrown into battle.

Right, I know. It's not the smartest plan, thrusting untrained laymen into a foreign terrain against highly lethal adversaries. Time is, of course, of the essence, but even so. You would think there would be a more strategic proposition other than handing pencil pusher Charlie (Sam Richardson) or mom-jean-wearing Norah (Mary Lynn Rajskub) a gun and expecting them to make any sort of dent in the upcoming conflict. Though they provide some much needed comic relief - Pratt's Dan Forester is not the dazzlingly snarky Star-Lord with witty one-liners and natural penchant for camera-winking along with the situational humor - their very presence is slightly befuddling.

Regardless, Dan isn't the worst candidate on the list, and he is of particular interest for one leader in the future: his grown daughter Col. Muri Forester (Yvonne Strahovski). Here we find the violin-playing sequences, the reunion of father and daughter. One is touched and horrified by the fate of his child; the other is able to find closure with this clandestine meeting. There may be some time travel questions that nag at those more concerned with the logistics of moving back and forth through spacetime. Even with a mere "Back to the Future" education on the subject, it seems a little rudimentary.

But what "The Tomorrow War" lacks in specifics and grander world-building arcs (ones that might make the fight with the alien beasts feel more like a true war and less like a series of convenient battles), it makes up for with heart and human interest. If you feel, in the first minutes of the film, like the pace it sets is unsteady or the characters and their set-up are veering course in the land of two dimensionality, give it a little longer. As the film progresses, its momentum - quick, to the point, and heavy on action - levels out with the more sentimental moments. Even without much space for the characters to breathe, they find a way to grow and expand, luring us in with a zippy script and the endless intrigue of an underdog story. When Dan and Muri finally find a viable solution to taking down the vicious, sharp-toothed, extraterrestrial predators, it's too late for the future, but they still have a chance back in 2023. Dan enlists his friends on the squad (Edwin Hodge, Jasmine Mathews) as well as his estranged father (J.K. Simmons) to help him beat the aliens to the punch.

There are elements of the film that are akin to "The Terminator" or more poignantly and philosophically (if you will, even for a numb-your-mind, adrenaline-pumping blockbuster) like "Edge of Tomorrow". There is also enough sweetness and focus on human relations to give it a quality like "It's a Wonderful Life", that is, if George Bailey trudged through Miami high-rises, evading spear-wielding, flesh-eating monsters yet still found time for that ah-ha moment, fully understanding how much he had been taking for granted. (The film also takes place over Christmas, setting itself up as the next unconventional annual holiday viewing à la "Die Hard".) To put it even more bluntly, this is if the summer beach read that takes you no time to ingest and even less time to digest its weak devices and passive themes were a movie. I'm not saying it's on the level of Kubrick, but you probably won't hate the time spent viewing.

If it sounds like there is a lot to like about "The Tomorrow War", you shouldn't check your hearing. The many moving parts and oscillating tones, which could feel flimsy and cheap in less able hands, wobble and shake here and there, but ultimately hook, line and sinks, not just into the diabolical swarm of alien booty, but in the heart of the viewers.

"The Tomorrow War" is now streaming on Prime Video.