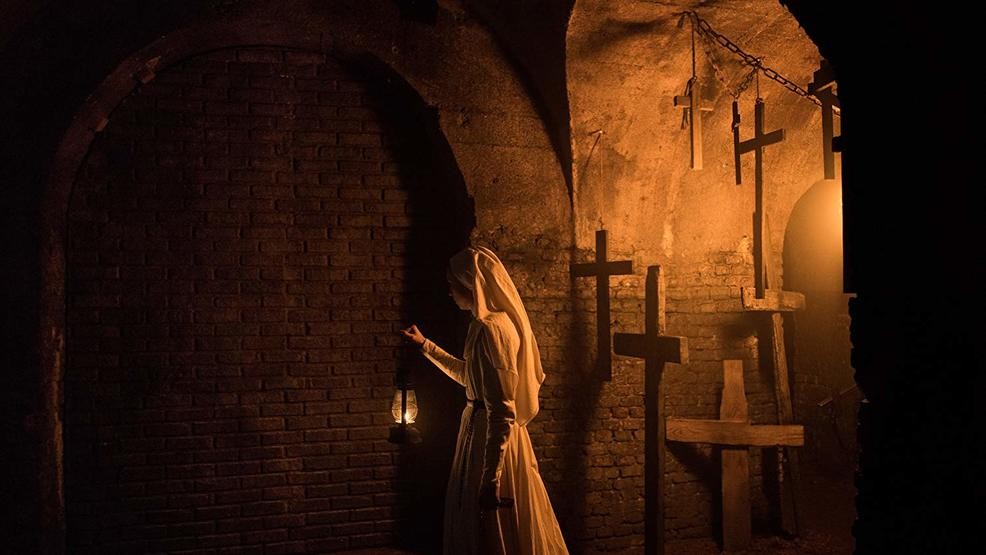 Review: 'The Nun', sure as all that is holy, does not leave a mark

Often the crux of the horror film genre is religious iconography and folklore. There wouldn’t be "The Exorcist" without the belief of the Catholic Church that demons can inhabit human bodies. There’s the mythology that the devil can implant his spawn into a woman’s womb, as portrayed in "Rosemary’s Baby". Heck, even vampires, arguably the most overplayed mystical villain, can be taken down by two pieces of wood and a sprinkling of water.

The newest film in "The Conjuring" universe knows our affinity for religious mysticism and takes full advantage of it. Relying almost entirely on the age-old fear and curiosity imbedded deep within us, "The Nun" is a doozy of clichés. Crosses flip slowly, ominously, unassisted upside-down. The blood of Jesus is literally the answer to their survival. Our protagonists traverse the spooky graveyard covered in a perpetual blanket of dense, molasses-like fog that secretes around aging headstones. Naturally, there is a ton of praying, and, inversely, using the Lord’s name in vain.

It’s 1952 in a remote part of Romania. A nun, frantic to evade the evil unleashed through a mysterious door in the abbey where her sisters have all perished, ties a rope around her neck and jumps from her bedroom window. Suicide, of course, is a grave sin in Catholicism. The Vatican, troubled by the act or perhaps hoping to get ahead of a scandal, calls upon their own personal “fixer”, Father Burke (Demián Bichir).

His church-appointed sidekick is Sister Irene (Taissa Farmiga – younger sister of Vera who stars as Lorraine Warren in "The Conjuring" films; the two could be twins apart from the 21 year age gap), a demure postulant working towards becoming a nun. She’s also a clairvoyant. Their handsome, bumbling Romanian guide is actually French-Canadian and goes by Frenchie (Jonas Bloquet). He’s our much-needed comic relief.

I’m a bit of a horror movie fanatic. Do I generally enjoy even a subpar horror film more than a decent drama? Absolutely. I am happy to go along with ridiculous origin stories, because the fun of horror is seeing how far it can stretch your imagination without breaking. At its best, horror marks you. At its worst, it wastes your time and $12.

"The Nun", sure as all that is holy, does not leave a mark.

If you don’t mind the ridiculous use of fog machines – someone please explain to me how fog can roll through from inside a building? – and predictable scenes where characters are trapped in a room with demon nuns, their faces covered in bloody sacks and their heads twitching sporadically with overused sound effects, then perhaps you won’t mind this film. You know when the scare is imminent. Every rotating camera shot is basically a dead giveaway she is about to be right behind them. The jolts are cheap, and, despite the extreme kitsch, demon nuns won’t completely scare the bejesus out of you.

On the other hand, if you like a movie that leads you on a journey full of meaning and backstory, with characters that act according to the general laws of reason and do not blame every leaf blowing in the breeze on the vague idea that “evil is among” them, then perhaps you should stay home and curl up with "Black Panther" for the twentieth time.

The film quickly covers how Valak the demon came to be, but it’s hardly an interesting subplot and doesn’t make much of an impression. The priest and the nun fall into Valak’s hand so readily, you wonder how it is humanly possible that not one, but two people could be so gullible. Sister Irene is supposed to have special powers, and yet we get only glimpses of such. She doesn’t use her clairvoyance in any meaningful or appropriate way, which begs the question, why did they bother giving her that ability to begin with? Also, she’s possibly one of the most uninteresting characters in horror movie history, and to watch her for as long as you do is the real torture here.

In the end, all you are left with is scare after scare, without much of a unifying, overarching story. They attempt to tie it all together, threading this fable with the others in the series by flashing forward to scenes from previous films, but it doesn’t feel kosher. Sure, it might make you jump, and perhaps that’s all you want, but if you’re expecting anything like its predecessors, you’d better start praying for a miracle.