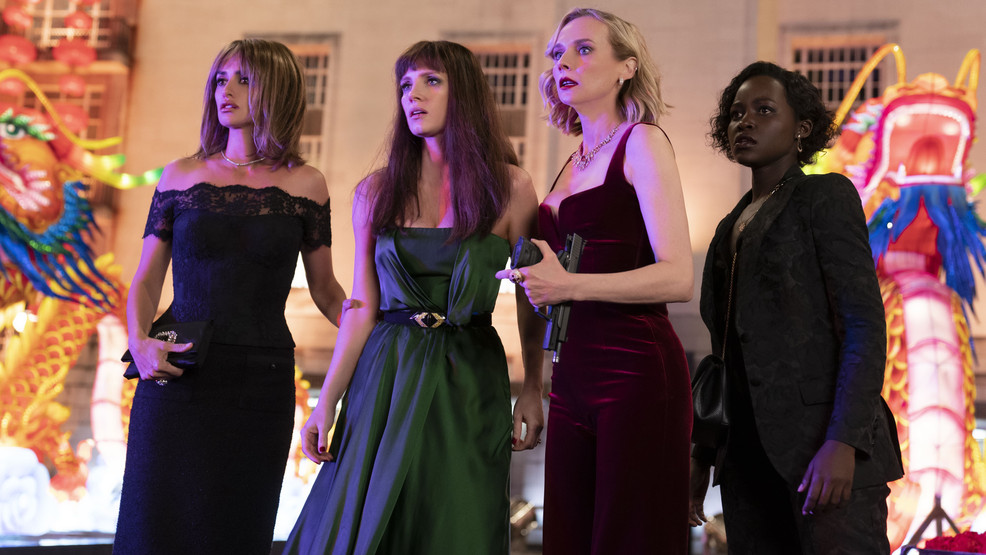 There are incredible stunts in "The 355". The film's impressive leads race through bustling scenes like Paris and Morocco, using motorbikes as missiles to deter their pursuers or forklifts to gain a better shot of their targets. But perhaps the greatest stunt, which could also be referred to as a back-alley Hollywood magic trick, is that this cast of spectacular, glass-ceiling-shattering women - Jessica Chastain, Lupita Nyong'o, Diane Kruger, Penélope Cruz and Chinese megastar Bingbing Fan - agreed to participate and lend their star power to such a mediocre, plodding script which produced, despite their combined charisma and top-tier acting chops, an even more disappointingly subpar film.

Striving to be mentioned in the same breath as Bond or Bourne, "The 355" makes a major flaw in assuming its audience is unperturbed by a nonsense plot. In fact, its core conflict resembles another film from last year, "Hitman's Wife's Bodyguard" which we liked just as little, but at least made it clear we weren't meant to take it totally seriously. Like in the aforementioned action-comedy which also found its villain manipulating the power grid to inflict his will on the world, the coveted weapon that our protagonists in "The 355" try to secure is a dark web hard drive that can control cities' electrical systems and send planes falling from the sky. It's a dangerous piece of tech that works by... who knows, it doesn't matter. In the wrong hands, it becomes a weapon of mass destruction.

Following a house raid in Colombia, the Infinity-Gauntlet-esque token is taken by a South American SWAT team member (Edgar Ramírez), who is in over his head keeping the highly-desired piece of equipment. CIA agents Nick Fowler (Sebastian Stan) and Mace Browne (Chastain) track him to Paris, where their mission is to steal it and ensure it is safely in American possession. But they aren't the only international agencies interested in the device. Marie Schmidt (Kruger) works for Germany's intelligence agency and has the same objective. Their intersecting jobs cause both to fumble their missions.

In need of back-up, Mace convinces a former-MI6 colleague Khadijah (Nyong'o), who has since retired to a desk job, to return to the field. After partnering with her adversary Marie to take on their common enemy, the final female team member to join the mission is Graciela (Cruz), a whimpering, wide-eyed, crisply-dressed therapist who unintentionally finds herself integral to tracking down the end-game device, but who just wants to excuse herself politely and return to her husband, kids and domestic life. The mission sends the girl gang from Paris to Morocco, where they commit clandestine surveillance and pickpocket their way to further intel which, after kicking the booty of some burly, strong-armed men, they succeed. But not everyone is trustworthy, and the device returns to ne'er-do-wells prepared to auction it off on the dark web. The femme fatales travel to Shanghai for one final showdown of smarts, will and espionage prowess.

It would be amiss to say that "The 355" doesn't have some decent sequences. Throw these veteran actresses in an empty room, and something viewer-palatable would come of it. The chemistry they have with one another puts the film in the tepid category of nearly enjoyable. Each also has experience with physical, action-heavy roles, and it's evident in their ease of movement as they dart through Metro tunnels and cling to the side of buildings. These women have no trouble handily portraying totally ruthless, brilliantly-agile mercenaries.

But the forced nature of writing a film purely to showcase a gaggle of female stars without a clear, succinct, believable story feels like perhaps it panders to a preconceived audience. There will be a script that warrants telling an all-women espionage story, but this ain't it. Co-written and directed by Simon Kinberg, the film sets up a generic spy thriller with formulaic twists and turns we see coming from at least a handful of scenes prior. The few testosterone-driven roles are even less fleshed out than Cruz's panicked, pedestrian (and frankly pointless) character.

Are there "silly little girl" jokes thrown around ironically by male mobster types? Mais bien sûr. Do the smart, witty characters with model looks come from different backgrounds, ethnicities and languages, like a grab bag of specialty Barbies thrown together to appeal to everyone willing to watch and play along. Si! (It's almost as frustrating as a writer randomly answering rhetorical questions in a foreign language.)

Ultimately, the leads, all of whom we respect and admire for their acting abilities and choices in past projects, are too good for this suffocating killjoy parading as a serious action thriller. The thought is admirable, but it doesn't count when it sets women back at least a few years from another similar, hopefully successful attempt at headlining (times five) in a predominantly male-driven genre. Like the recent storms that produced a suffocating amount of snow here in Seattle, "The 355" may leave a mark initially, but by spring, you'll forget it ever happened.